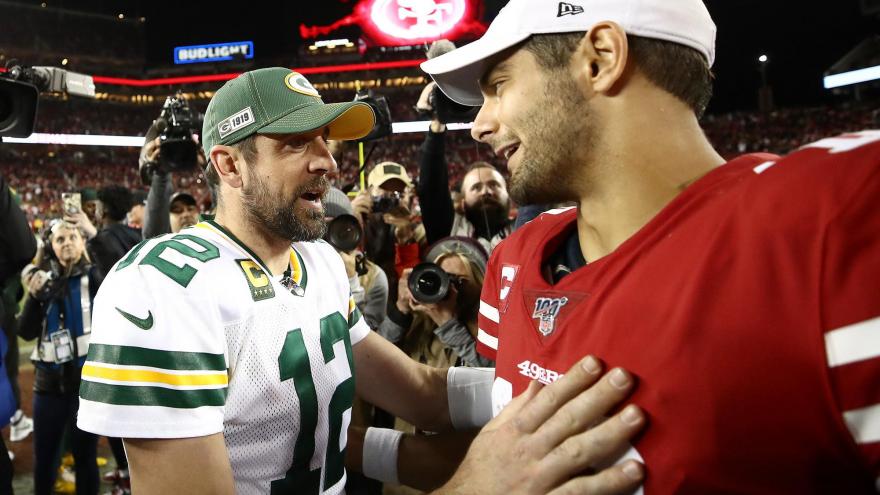 (CNN) -- Four teams are one game away from the Super Bowl LIV, the 54th time the game has been played for those who don't read Latin.

The NFC and AFC Conference Championships are on the line on Sunday to determine the two teams that will play in the Super Bowl. Here are the story lines to watch heading into the games.

During the regular season, the Kansas City Chiefs won six of the seven games in which their opponents scored first. Despite that come-from-behind experience, the team hadn't seen a deficit like the 24-point hole they faced against the Houston Texans last week.

"We started off a little slow, obviously," head coach Andy Reid said with a wry smile. "But nobody flinched, everybody hung in there ... there was no panic."

The Chiefs rallied to win in astonishing fashion, beating Houston 51-31. Kansas City scored 41 straight points after the Texans squandered their 24-point lead. The Chiefs have a potent passing attack, with quarterback Patrick Mahomes distributing 321 passing yards between 8 different receivers against the Texans.

"It's tough for teams to cover our skill guys for more than 3-5 seconds," said Kansas City lineman Mitchell Schwartz. "If we're able to do our job and give Pat enough time, guys are going to come open."

Mahomes tossed five touchdowns in the comeback win, and teammates credited him for firing them up after the disastrous first quarter. But Mahomes said it's the team's collective nature that fed the comeback.

"If someone isn't having the best day, we pick each other up," he said. "We feed off each other's energy."

On Sunday, if their opponents happen to get an early lead, the Chiefs enjoy a unique advantage at Arrowhead Stadium. Their venue has broken records for decibel levels in stadiums, and Kansas City fans make life difficult for opposing players trying to hear plays on the field.

"I want to thank our fans, appreciate them for hanging in the cold and cheering us on," Reid said. They make a difference here ... no fans deserve it more than ours."

The Chiefs face the Tennessee Titans, the lowest seeded team in the AFC. At 9-7 during the regular season, they had the worst record among playoff teams, along with the Philadelphia Eagles. But records aren't that important to the Titans, who went 2-4 before switching quarterbacks en route to a 7-3 record down the playoff stretch.

In the postseason, they dispatched playoff favorites the New England Patriots and the Baltimore Ravens. Credit for that goes to the Titans defense, which stopped two straight elite quarterbacks in the Patriots' Tom Brady and and the Ravens' Lamar Jackson.

On offense, Titans running back Derrick Henry has been unstoppable across two playoffs games. Henry ran for 182 and 195 yards against the Ravens and Patriots, respectively. These two standout defensive units had only allowed opposing back to gain 93 and 95 yards per game during the regular season. That's bad news for the Chiefs, as Henry says of the total 64 rushing attempts he got across two games: "I get into a rhythm the more carries I get."

Henry said the Titans' are focused on prepare the entire team for games like the conference championship.

"We're out there for practice, competing, getting better ... keeping emphasis on the plan that's been put in for us to execute," he said.

When the Packers headed to San Francisco to face the 49ers in late November, there was little reason to be concerned with the Green Bay football team: they were 8-2 and clearly playoff contenders. But the 49ers put a 37-8 drubbing on the Packers, and suddenly the team was in need of some reflecting.

Locker-room wide, players called it a turning point, the catalyst for a five-game winning streak that allowed Green Bay to skip the first-round of the playoffs. For a Packer defense that was top 10 in the league in points per game allowed at 19.6, 37 was a difficult number to swallow.

But the growth from that game has been key for the Green Bay defenders, as they buckled down to only allow 14.6 points per game from there on. A lot of that has been due to Preston Smith and Za'Darius Smith, linebackers who are in their first year with the team.

They take turns sacking quarterbacks, with Za'Darius racking up 13.5 and Preston not far behind with 12, and their tag-team approach was even evident at their press conference. When asked if they foresaw their impact, Za'Darius started: "I thought..." and upon seeing Preston start to speak, he dropped off, "You go ahead." Preston said with a smile: "Yes we did, we envisioned this being the thing we brought to the table." Za'Darius nodded and grinned in agreement.

The Packers offense is clicking, but they'll need a better game against the 49ers, as the 37-8 loss saw San Francisco's defensive unit force quarterback Aaron Rodgers into a season-low 104 passing yards while limiting running back Aaron Jones to just 38 on the ground. Jones, who had an otherwise terrific season with more than 1,000 yards rushing and over 400 receiving, said his teammates helped him handle his relatively newfound success: "It takes all 11 out there...so when the attention is on you, it's not just on you. You have help. You have your brothers out there with you."

Many 49ers players are experiencing the postseason for the first time. Until this year, the franchise hadn't made the playoffs since 2013. Offensive linemen Joe Staley credits head coach Kyle Shanahan for helping the team focus their vision.

"This is my 13th NFL team here, and every year is different ...b ut this one is really special in terms of camaraderie in the locker room," Staley said. "Guys are coming to work every single day looking to get better. It's a special bunch."

Staley gave Shanahan and general manager John Lynch credit for keeping faith in players after a 6-10 record in Shanahan's inaugural season, and even more so after last year's 4-12 campaign: "Just having patience with the roster...guys they drafted, brought in through free agency, guys they held onto...and believed in."

As the top seed in the conference, the 49ers have home-field advantage and will play in the familiar confines of Levi's Stadium. A new addition to the squad, wide receiver Emmanuel Sanders, says 49ers faithful always give him a boost, even pointing to a road example: "I'll never forget touching down in Seattle and seeing all those fans out there, and even though I've only been here about five or six weeks, I was able to poke my chest out and say I'm part of something special ... it was amazing."