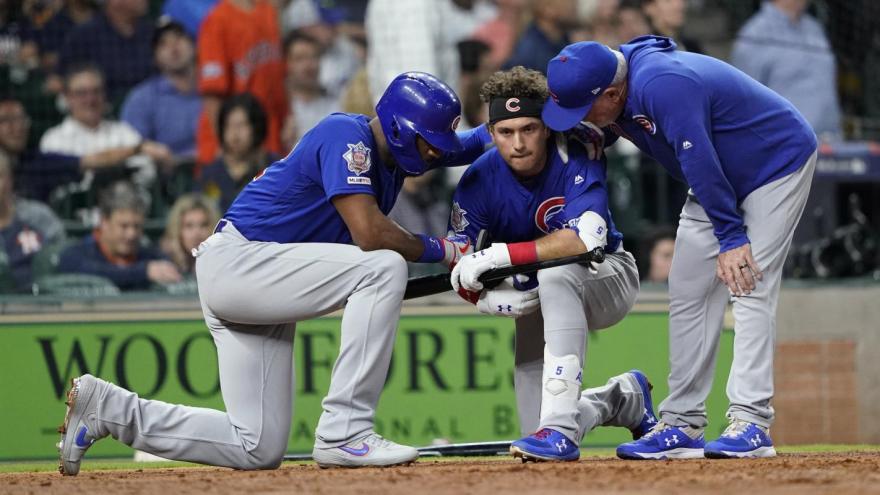 Chicago Cubs' Albert Almora Jr. is consoled after hitting a foul ball into the stands.

(CNN) -- A sharply hit foul ball struck a girl during the Chicago Cubs' game with the Astros in Houston on Wednesday night, sending the young fan to a hospital and pausing the contest as the batter knelt in shock.

Cubs outfielder Albert Almora Jr. hit the line drive in the fourth inning, into the field-level seats on the third-base side at the Astros' Minute Maid Park.

The crowd let out a collective gasp when the ball struck the child. Almora was distraught, throwing his hands behind his head immediately after seeing the impact.

The girl was taken to a hospital, but her condition was not immediately available. A fan who was sitting nearby, David LeVasseur, told CNN that the child appeared to be conscious as she was being carried away.

Before finishing the at-bat, Almora got down on one knee and lowered his head as his manager and a teammate consoled him. Later in the game, Almora went to the area of the stands where the girl was hit and appeared to cry in the arms of a female security guard.

A shaken Almora told reporters of his regret after the Cubs' 2-1 victory, and of his hope that he'd be in touch with the child.

"As soon as I hit it, the first person I locked eyes on was her," he said, speaking hesitatingly, his eyes down. "... Obviously I didn't want that to happen and intend for that to happen."

"God willing, I'll be able to have a relationship with this little girl for the rest of my life. Prayers right now, and that's all I really can control."

The Houston Astros confirmed the child was taken to a hospital, but declined to provide further information.

"We are not able to disclose any further details at this time. The Astros send our thoughts and prayers to the entire family," the team said in a statement.

Major League Baseball announced in 2018 that all 30 league ballparks were extending protective netting to at least the far ends of both dugouts -- that is, the ends farthest from home plate -- intending to enhance fans' safety.

The child who was struck on Wednesday night was sitting beyond the third-base dugout's far end, apparently beyond the netting.

The league extended the netting after high-profile incidents in which batted balls struck fans -- including a man who was blinded in one eye by a foul ball during an August 2017 game at the Cubs' Wrigley Field.

The clubs' move last year to extend nets to the dugouts' far ends went beyond what MLB recommended in December 2015. Then, the commissioner's office encouraged teams to shield field-level seats up to the dugout ends closest to home plate.

At the time, Commissioner Robert Manfred Jr. said the recommendation tried to "balance the need for an adequate number of seating options with our desire to preserve the interactive pregame and in-game fan experience that often centers around the dugouts, where fans can catch foul balls, see their favorite player up close and, if they are lucky, catch a tossed ball or other souvenir."

Some teams extend their netting beyond the dugouts' far ends.

Starting this year, the Miami Marlins' stadium has netting that extends about 120 feet beyond the dugouts. The netting's height tapers down from 30 feet high at the dugouts, eventually meeting the foul-territory wall.

After Wednesday's game, Cubs third baseman Kris Bryant told ESPN that he'd like to see netting "around the whole field."

"I mean, you can see through these fences here," Bryant said, referring to the netting. "There's a lot of kids coming to the games, young kids, who want to watch us play.

"And the ball's coming hard. The speed of the game is quick. I think any safety measure we can take to make sure that fans are safe, we should do it."

Almora, at the end of his interview with reporters, was asked if he believed netting should go all the way to the foul poles.

"Right now, obviously, I want to put a net around the whole stadium. I don't know," he said.

MLB said Wednesday's incident was "extremely upsetting," and implied it would continue examining the issue of fan safety.

"Clubs have significantly expanded netting and their inventory of protected seats in recent years. With last night's event in mind, we will continue our efforts on this important issue," MLB said in a released statement Thursday.

Almora's wife, Krystal Almora, told CNN on Thursday that her husband texted her about his grief shortly after the foul ball, and after the game.

"Alberto wants to remain in this little girl's life forever," she said.

"I think if he was able to, he would have gone to the hospital to see her" that night, she said.

The Cubs flew to St. Louis early Thursday ahead of a weekend series against the Cardinals. "He was definitely a wreck when it happened. It was such a scary, awful thing to experience," she said.

The Almoras have two children -- one who is nearly 3, and an infant.

"You just know ... how frightening this could be," she said.

The girl in Houston apparently wasn't the only baseball fan hit by a batted ball Wednesday.

In Los Angeles, Dodgers outfielder Alex Verdugo hit a ball into the stands along the first-base line during the third inning of a game with the New York Mets on Wednesday night.

SportsNet New York footage shows the fan, a man, dabbing a red spot on his head with a napkin, remaining in his seat as he talked to people near him. "You can see the welt on that gentleman's head," announcer Gary Cohen told SNY viewers. "He's toughing it out."

Correction: This story has been updated to correct a quote attributed to Kris Bryant.