Fossil shows that dinosaurs got sick just like us 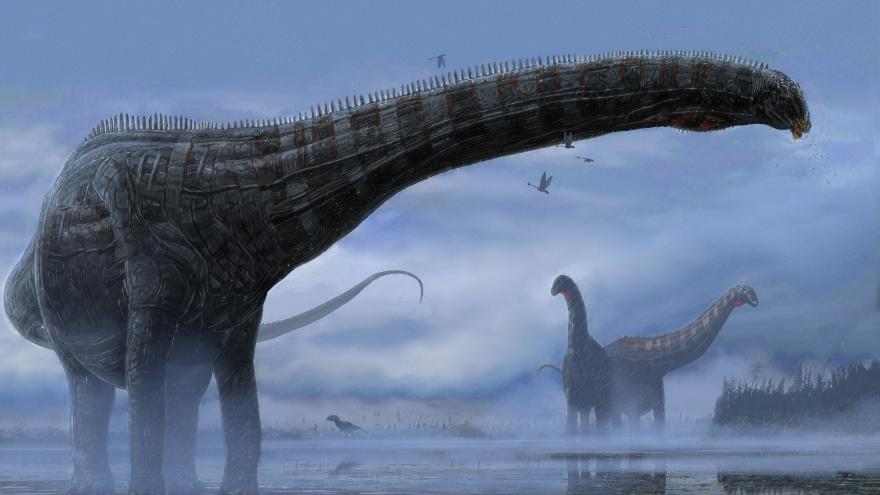 Those words are spoken by the fictional Dr. John Hammond in the trailer for "Jurassic World Dominion," serving as a nod to the upcoming film as it toys with an intriguing and terrifying "what if": Could long-extinct dinosaurs and humans ever coexist, or would it be an ecological disaster?

Fortunately, this is a reality we don't have to face -- and we still get to enjoy the unusual sight of snow-dusted hadrosaurs, thanks to Hollywood movie magic. Stunning glimpses of the film's dinosaurs look more scientifically accurate than ever before.

Particularly tantalizing teasers from the movie include a velociraptor sporting colorful feathers and its colossal reptilian cousin Quetzalcoatlus, a flying pterosaur, depictions we've only ever seen in research.

Dinosaurs can capture our imagination at any age, but much of what we once knew about these ancient creatures is being rewritten. And this week, we learned one of the ways in which dinosaurs weren't so different from us.

If you've ever struggled through flu-like symptoms, you'll feel for Dolly.

This young long-necked dinosaur, nicknamed for Dolly Parton, likely suffered through coughing, sneezing and a fever about 150 million years ago.

When scientists took a closer look at the fossil, found in southwest Montana, they noticed abnormal bony protrusions within Dolly's neck.

The diplodocid developed an infection that spread up its neck bones and may have caused its death, the researchers believe. It's the first evidence of a respiratory infection preserved in a dinosaur fossil -- and it shows that dinos got sick, just like we do.

The discovery of a child's tooth in a French cave is changing what we know about early humans.

The little molar was found along with hundreds of stone tools dated to about 54,000 years ago -- which means that Homo sapiens lived in Europe 10,000 years earlier than archaeologists thought.

The tooth was also found sandwiched between layers of Neanderthal remains, suggesting that these ancient ancestors coexisted with humans in western Europe.

This find challenges the idea that the arrival of early humans led to the downfall and extinction of Neanderthals, who lived across Europe and Asia for 300,000 years before disappearing from the planet.

A polar research expedition aboard the RV Polarstern stumbled upon sponges that have clustered on top of extinct underwater volcanoes.

Despite the lack of nutrients in this frigid water near the North Pole, the 300-year-old sponge communities are thriving on an unusual source: fossils.

The remains of extinct animals and fauna litter the sea floor, where they once relied on heat and nutrients provided by the volcanic activity thousands of years ago. Now, they serve as an energy source for the sponges.

But this newly discovered ecosystem may be at risk as the planet warms.

Venus has often been called Earth's twin because the two planets are similar in size, but one planet is hot enough to melt lead, while the other supports life.

Peering beneath the thick cloud cover on Venus is helping scientists learn why these worlds evolved differently.

The Parker Solar Probe, which is on a mission to study the sun, captured new images of Venus during a flyby. Beneath the hazy shroud of its atmosphere, our sister planet is practically aglow.

Venus is so scorching that one researcher compared the planet's thermal glow to the luminescence of "a piece of iron pulled from a forge."

When a mother chimpanzee named Suzee noticed that her son, Sia, had an injured foot, she plucked something out of the air and applied it to his wound.

Researchers at Loango National Park in Gabon took a closer look and realized she was capturing flying insects and using them as a form of medicine.

This was just one of many instances at the park of chimpanzees caught on video tending to their own wounds, as well as the wounds of others.

Scientists have never witnessed this kind of behavior before, and it may be a sign of helpful tendencies in chimpanzees similar to empathy in humans.

It's been a week for wild finds:

-- These big-brained birds may be able to adapt better to the climate crisis -- and scientists figured it out from avian collisions with Chicago skyscrapers.

-- The lightest exoplanet ever detected is one of three worlds found just 4 light-years away, orbiting the star closest to our sun.