Fortnite is now allowing users to watch the MLK 'I have a dream' speech in the game. But why? 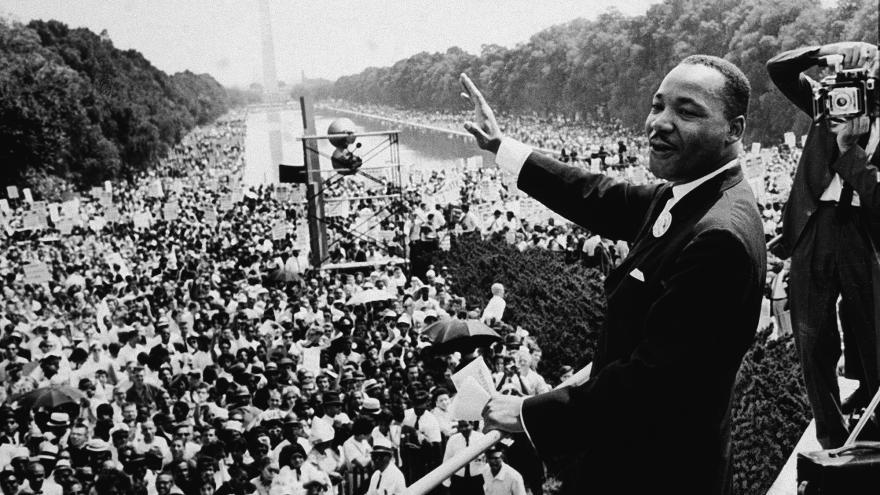 (CNN) -- Fortnite users have long had concerts to attend and movies to watch as they wander around the video game through their virtual avatars. Now, they have yet another option: reliving Martin Luther King Jr.'s iconic "I Have a Dream" speech.

The new virtual experience, which launched Thursday, is called "March Through Time" and is a collaboration between Fortnite and TIME Studios, the film and television division of Time magazine. It recreates the Lincoln Memorial and National Mall where King gave his famous speech in 1963, in a virtual world that Fortnite maker Epic Games describes as a "reimagined Washigton, DC" called D.C. 63.

"The experience extends with museum-inspired points of interest, and collaborative mini-game quests you complete with others," Epic Games said in a statement. "These activities progress players through the experience and bring to life important themes of Dr. King's speech: we move forward when we work together."

The announcement was initially greeted with skepticism and confusion, with several Twitter users questioning the video game's use of the late civil rights leader.

The Fortnite collaboration is based on Time's interactive project "The March," which launched in February last year at the DuSable Museum of African American History in Chicago, and was done with the support of King's estate.

"We continuously strive to move Dr. King from the history books and place his legacy directly into the lives of younger generations," Eric D. Tidwell, managing director and general counsel of the King Estate, said in a statement. "Presenting his most famous speech in such an interactive format helps us achieve that goal."

It's the latest example of Fortnite adding experiences beyond regular gameplay, as it tries to present itself as a metaverse rather than just a video game. Last year, it hosted musical performances by artists such as Marshmello and Travis Scott, as well as three movies by director Christopher Nolan.

The metaverse was originally conceived as the setting for dystopian science fiction novels, where virtual universes provide an escape from crumbling societies, but the tech industry has painted a far rosier picture of the concept in recent months. The idea is to create a space similar to the internet, but one that users (via digital avatars) can walk around inside of and where they can interact with one another in real time.

Epic Games CEO Tim Sweeney took great pains to present Fortnite as a metaverse and a "social experience" when he took the stand in his company's high-profile lawsuit against Apple earlier this year over the commissions the iPhone maker extracts from app developers. Sweeney's argument was an effort to bolster Epic's case that it is more than just a game and undercut Apple's assertion that it is not a monopoly because Fortnite users can choose to play it on devices other than iPhones and iPads.

Epic, on the other hand, sought to present itself as one of the millions of apps on Apple's App Store that are subject to the company's onerous restrictions and commissions on in-app purchases. (A verdict in the case is still pending.)

Fortnite isn't the only popular game to lean heavily on the concept of the metaverse.

One of the more notable examples is Roblox, which features games-within-a-game created by users and has also branched out into concerts and TV shows in recent months. Minecraft, owned by Microsoft, has also worked on expanding its own metaverse, with the organization Reporters Without Borders recently creating a virtual library within the game featuring articles that have been censored around the world.

Big Tech is also increasingly embracing the metaverse, with the word being mentioned nearly two dozen times on Facebook's most recent earnings call. The social media company has long been experimenting with virtual reality features and services — including in the workplace — as it looks to move beyond the world of two-dimensional video calls.

A full-fledged metaverse is still likely years away for several reasons, but the gaming industry is currently the one leading the charge.