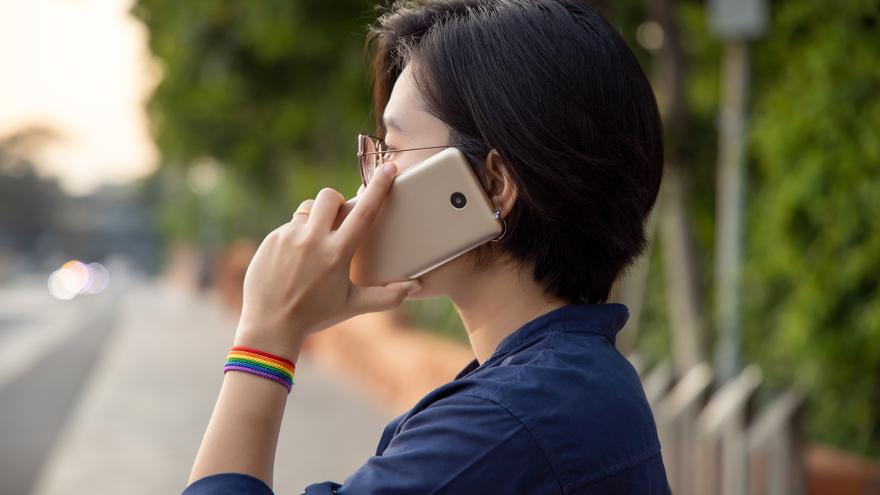 (CNN) -- The nonprofit that operates the National Suicide Prevention Lifeline plans to soon launch a pilot program for LGBTQ individuals to call.

The hope is that such a program could become a permanent subnetwork, similar to one that already exists for veterans, and add a more specialized crisis line for a community that is considered at higher risk for suicide and self-harm. The lifeline, which can currently be reached by dialing 1-800-273-8255, is in the process of transitioning to a shorter 988 number on July 16.

Vibrant, the nonprofit that is administering the lifeline on behalf of the US Substance Abuse and Mental Health Services Administration, an agency under the Department of Health and Human Services, plans to announce further details about the pilot program ahead of the 988 rollout later this month. Among the questions to be answered are how the program will be funded and staffed, as the 988 network itself is likely to not be at full capacity when it is made available nationwide.

"Establishing a service of such critical importance requires care and consideration," John Draper, the lifeline's executive director, said in a statement provided to CNN. "Our primary concern is ensuring we develop a pilot that will eliminate barriers and provide affirming support to LGBTQIA+ populations."

Several organizations, including the US Centers for Disease Control and Prevention and The Trevor Project, a suicide prevention group for LGBTQ young people, have found significantly higher risks of suicide attempts and thoughts, particularly for young people.

Some 45% of LGBTQ youth seriously considered attempting suicide over the past year, according to the Trevor Project's annual survey, which was released in May. But parents can make a difference: LGBTQ youth who felt high social support from their family said they attempted suicide at less than half the rate of those who felt low or moderate social support.

"Given that we know certain populations are at increased risk for suicide due to systemic issues such as homophobia, transphobia, racism, and historical traumas, to name a few, it's imperative that equity is at the forefront of efforts to build out the nationwide 988 infrastructure," Colleen Carr, the director for the National Action Alliance for Suicide Prevention at Education Development Center, the nation's public-private partnership for suicide prevention, said in a statement to CNN.

"Keeping this focus will ensure community crisis response services are reflective of, and meet the needs of, all communities in our country," she added.

Vibrant hopes to use this pilot program as a model for others and will also likely launch a pilot program this fall for a subnetwork for people who are deaf and hard of hearing, Draper had previously told CNN. Vibrant also has been in discussions with national tribal public health leaders about the best way to serve American Indian and Alaska Native populations. While there is presently no subnetwork planned for those communities at this time, the organization hopes to learn strategies from its separate subnetwork pilot programs to help reach and better serve marginalized populations.

"When you have a population like American Indian/Alaska Natives that has been historically excluded or underserved or misserved, it's so important to get it right," said Shelby Rowe, director of the Suicide Prevention Resource Center at the University of Oklahoma Health Science Center, who has been in discussions with Vibrant on the launch of 988.

Steps are underway to ramp up awareness around 988 and strengthen call centers on a local level, with an emphasis on making sure individual call centers know how to best collaborate with and serve their local tribal nations and communities -- and all who live in their communities, Rowe said. For instance, she said that the state of Washington has included tribal nations in its preparations for the national rollout of 988.

Rowe added that some tribes may have counselors or therapists available to help support 988 call centers on the local level, especially this summer as the new number launches nationwide.

Determining the best practices, strategies and resources for reaching various communities remains important, as many people who might call the 988 lifeline could identify with more than one group -- for instance, while they could identify as Native American, they may also be a veteran or a member of the LGBTQ community, said Jacque Gray, program director of the National Indigenous Elder Justice Initiative.

"There's a lot of intersections of those identities, and I think it's about allowing the option of which they would like to connect with," Gray told CNN.

And research psychologist Joseph P. Gone, Harvard professor and member of the Aaniiih-Gros Ventre tribal nation of Montana, wrote in an email to CNN that adding specialized subnetworks as part of the National Suicide Prevention Lifeline is "one more promising weapon in the arsenal" to combat suicide in the United States, including among Indigenous peoples.

Due to the long history of racism and discrimination against Indigenous people in the United States, they tend to exhibit an "understandable mistrust" of many mainstream health care institutions, Gone believes.

"Thus, specially trained counselors who are familiar with the particular needs and orientations of American Indian and Alaska Native people in distress can help to ensure that effective counseling and referrals are offered in response to pressing requests for help," Gone wrote in his email.