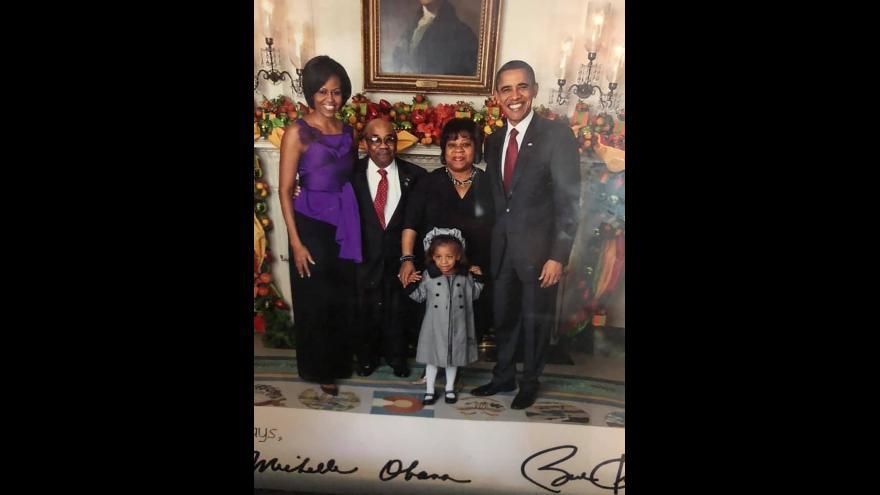 (CNN) -- Wilson Roosevelt Jerman, a former White House butler who worked under 11 US Presidents, has died after contracting coronavirus. He was 91 years old.

His granddaughter, Shanta Taylor Gay, told CNN on Thursday Jerman died on May 16.

"He was authentic. He was a quiet but stern man. Very giving, never fussed or complained. Always said he lived a blessed life," she said in an interview.

Gay said the family is "taking it day by day" in light of her grandfather's death.

The long-serving employee began working in the White House in 1957 under then-President Dwight D. Eisenhower as a cleaner. He was promoted to butler under former President John F. Kennedy, a move that was orchestrated by former first lady Jacqueline Kennedy Onassis, granddaughter Jamila Garrett told FOX 5.

"Jackie O actually promoted him to a butler because of the relationship," Garrett said. "She was instrumental in ensuring that that happened."

Gay told CNN that her grandfather suffered a stroke in 2011 and the Obamas assisted in making sure he was taken care of while in the hospital, even sending flowers. At the end of his career, Obama honored Jerman for his more than 50 years of service with a plaque and a coin to represent each President he served, Gay said.

A photo of Jerman standing in an elevator with Barack Obama and Michelle Obama was included in the former first lady's memoir, "Becoming."

Michelle Obama said in a statement to CNN on Thursday that the former first family was lucky to have known Jerman and that he had a generous spirit.

"With his kindness and care, Wilson Jerman helped make the White House a home for decades of First Families, including ours," the former first lady said. "His service to others -- his willingness to go above and beyond for the country he loved and all those whose lives he touched -- is a legacy worthy of his generous spirit. We were lucky to have known him. Barack and I send our sincerest love and prayers to his family."

"When growing up, he never discussed politics," Gay said. "And never judged by the Republican or Democrat. It was all about the person independently and learning a person."

Former first lady Hillary Clinton tweeted that she and former President Bill Clinton are saddened by his death.

"Jerman served as a White House butler across 11 presidencies and made generations of first families feel at home, including ours," Clinton wrote on Thursday. "Our warmest condolences to his loved ones."

Jenna Bush Hager, daughter of former President George W. Bush and former first lady Laura Bush and host of NBC's "Today with Hoda & Jenna," paid tribute to Jerman on Thursday at the beginning of the show. She said he was one of the reasons the White House felt like home.

"The reason why it felt like home was because of people like him," she said. "We loved him and he was beloved by my family, and he will be so missed."

She also shared a statement from her parents, who remembered Jerman as "a lovely man."

"He was the first person we saw the morning when we left the residence and each night when we returned," the Bushes said.

This story has been updated with reaction from former presidential families.

Lawrence 14 days ago
The man saw history up close.
RIP.
Like Reply Delete

Today 83° Times of sun and clouds