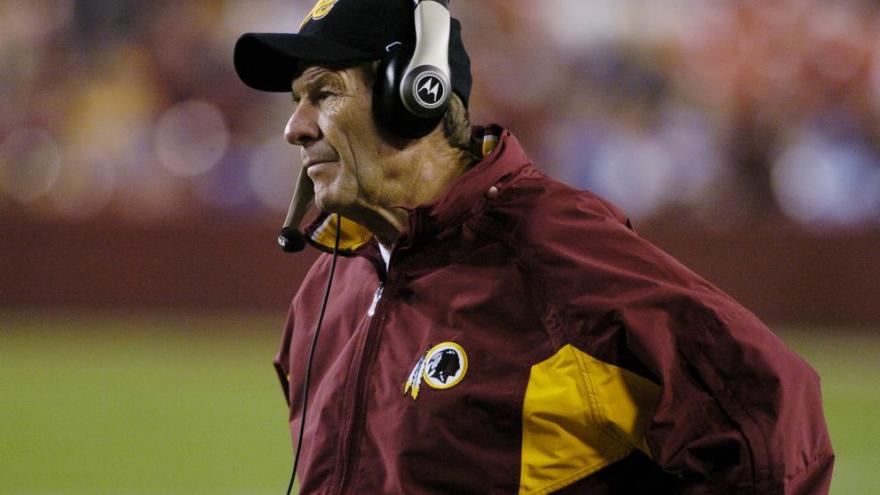 Joe Bugel watches the Redskins in 2004.

Bugel coached for 32 NFL seasons during his career and is known as being the architect of the "Hogs" offensive line, which led the Redskins to three Super Bowl victories.

The team said he was "regarded as one of the greatest offensive line coaches in NFL history."

"I am absolutely devastated by the news of Joe's passing," Redskins owner Dan Snyder said in the team's statement.

"Joe was a larger than life figure and a true legend of his profession. He exemplified what it meant to be a Redskin with his character and ability to connect with his players along with a work ethic that was unmatched," he said.

Synder said that he had shared a special bond with Bugel: "He was a man who not only gave me a better understanding of the game of football, but who also gave me perspective on what is truly important in life. I absolutely adored him and will miss him terribly."

"He came to work every day with such great excitement and his players had tremendous respect for him. The strength of our coaching staff on both sides of the ball was a key reason we had so much success.

"Bugel was such a big part of that and his impact was felt not only by those Redskins' teams, but truly across the entire League," Gibbs said in the Redskins' statement.

Bugel coached under Gibbs from 1981 until 1989 when he was hired by the then-Phoenix Cardinals as head coach in 1990, the statement says. After four seasons he joined the Oakland Raiders and then the San Diego Chargers, returning to the Redskins from 2004 until his retirement after the 2009 season.

According to the Redskins, Bugel came from Pittsburgh where he had been a two-way star in football at Munhall High School. He was inducted into the Pennsylvania Sports Hall of Fame (Western Chapter) in 2005.

He and his wife Brenda had three daughters: Angie, Jennifer and Holly.