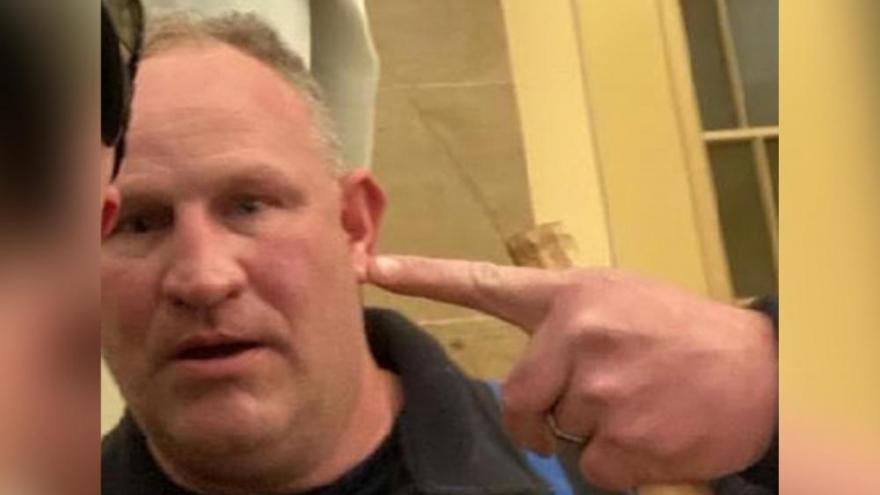 Thomas Robertson, a former sergeant of the Rocky Mount police in Virginia, faced charges including impeding law enforcement officers, obstructing an official proceeding, entering and remaining in restricted grounds and tampering with evidence.

(CNN) -- A jury in Washington, DC, on Monday found an ex-Virginia police officer guilty on all six charges he faced for his actions around the US Capitol attack on January 6, 2021.

Thomas Robertson, a former sergeant of the Rocky Mount police in Virginia, faced charges including impeding law enforcement officers, obstructing an official proceeding, entering and remaining in restricted grounds and tampering with evidence.

The jury heard from multiple witness during the trial last week, including Washington police officers who were there during the attack, federal agents and Robertson's former police colleague and co-defendant who testified as part of a plea deal with the government.

One juror told CNN that "there was debate on every charge" while the jury deliberated for around 13 hours.

"I was encouraged," the juror told CNN following the verdict. "Being a jury of Washingtonians in a January 6 case, it would be natural to wonder what bias is in the jury. And I really feel like it was so thorough, thoughtful and painstaking."

A sentencing date has not been set.

During the trial, a DC Metropolitan Police officer testified that a man carrying a stick, who prosecutors say was Robertson, hit him and another officer as they tried to pass through the mob of rioters during the attack. Prosecutors played several clips of the incident, including footage from police body cameras worn that day.

Prosecutors cited online posts Robertson allegedly wrote a month before the attack where he called for an "opened armed rebellion."

"The defendant made good on that promise," assistant US attorney Elizabeth Aloi told the jury during opening arguments, saying that Robertson used a large stick to impede officers who were called in as back up during the riot.

Robertson's former Rocky Mount police colleague Jacob Fracker testified that Robertson joined him inside the Capitol, took a photo with him and joined in chanting and cheering with the crowd inside. Fracker also testified that he had given Robertson his cell phone after the pair were told to turn themselves in, and that Robertson had put the phone in a container for ammunition and told him something to the effect of "problem solved."

According to the FBI agent Kathryn Camilleri, who investigated the two men, both Robertson and Fracker activated new phones in the days following the riot.

In closing arguments Friday, Robertson's attorneys argued that he had "no plans to go down and say 'I'm going to stop Congress from doing this vote'" and continued to suggest that the stick Robertson had with him was simply a walking stick.

Robertson has been awaiting his trial in jail since July, after investigators said they found a rifle and bomb-making material in his home and learned that he bought another 37 guns on the internet after his original arrest in January 2021.