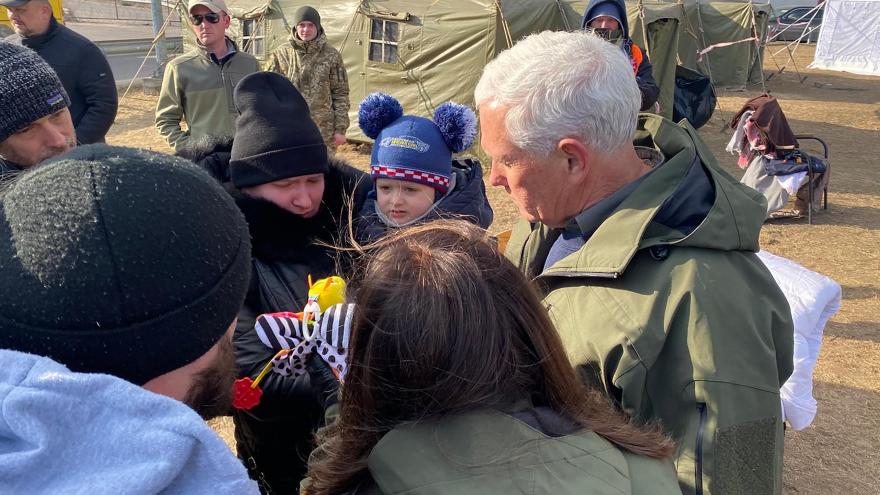 Pence was joined by his wife, Karen Pence, in a trip organized by minister Edward Graham and Samaritan's Purse, an American evangelical Christian relief charity.

"The impact of the Russian invasion on these families is heartbreaking and the need for support is great," Pence tweeted Thursday alongside photos of his meeting.

According to a person close to the Indiana Republican, Pence has over the years participated in several events with Samaritan's Purse, which is run by Franklin Graham, the son of the legendary Christian leader Billy Graham. (Edward Graham is the son of Franklin Graham.)

Pence, who made the stop in Ukraine following a visit to Israel this week, has spoken out in recent days against the Russian invasion. Last week, he condemned "apologists" for Russian President Vladimir Putin within his own party during a retreat with donors to the Republican National Committee.

"There is no room in this party for apologists for Putin. There is only room for champions of freedom," Pence said, according to a source in the room.

Pence's visit with the Ukrainian refugees comes as the Republican prepares for a potential White House run in 2024. His political activity through his advocacy group Advancing American Freedom has ramped up in recent months, including a recent $10 million ad buy targeting vulnerable House Democrats over Ukraine and US energy policy.

In addition to forging a different path from Trump on Ukraine, Pence has begun speaking out more directly against the former President, particularly around issues involving the 2020 election and what led to the riot at the US Capitol on January 6, 2021.

In a speech in Florida last month for conservative lawyers, he said Trump was "wrong" to suggest Pence could have done anything to change or delay the counting of the 2020 electoral votes. Pence condemned the idea as "un-American" and warned that Trump's position could be problematic for Republicans in the next presidential contest.

"Under the Constitution, I had no right to change the outcome of our election, and (Vice President) Kamala Harris will have no right to overturn the election when we beat them in 2024," Pence said.

CORRECTION: This story has been updated to reflect former Vice President Mike Pence's location during his visit Thursday to the Ukraine-Poland border. He was in Ukraine.