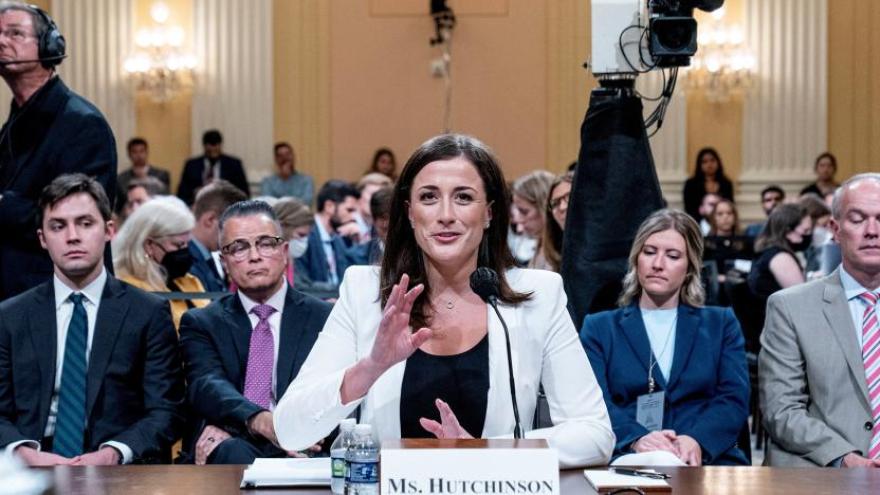 Former Trump White House aide Cassidy Hutchinson is cooperating with the Justice Department's criminal investigation into the plots to subvert the 2020 election, a source with knowledge of the discussions confirmed to CNN.

(CNN) -- Former Trump White House aide Cassidy Hutchinson is cooperating with the Justice Department's criminal investigation into the plots to subvert the 2020 election, a source with knowledge of the discussions confirmed to CNN.

The extent of that cooperation, first reported by ABC News, isn't clear.

The Justice Department declined to comment. An attorney for Hutchinson did not respond to a request for comment.

The criminal investigation into the US Capitol attack on January 6, 2021, and attempts to disrupt the transfer of power between the Trump and Biden administrations is the most wide-ranging in the Justice Department's history.

The agency has already brought two top aides to Pence in front of a federal grand jury, a move that signals its probe has reached inside former President Donald Trump's White House and that investigators are looking at conduct directly related to Trump and his closest allies' efforts to overturn the 2020 election.

Hutchinson has cooperated extensively with the House select committee's investigation into the attack on the US Capitol, having sat for four closed-door depositions. She revealed how Trump and his inner circle were warned about the potential for violence on January 6, and how Trump wanted to join the throngs of his supporters at the Capitol.

Her testimony bolstered the narrative that the committee has been driving toward: That Trump incited and supported the insurrection as part of a desperate power grab to steal a second term, and that many of his top advisers thought his schemes were illegal.

The Justice Department has also reached out to other Trump White House officials regarding the Capitol attack, said Alyssa Farah Griffin, a former White House communications director during the Trump administration.

Farah Griffin, now a CNN political commentator, told CNN's John Berman on Wednesday she had not been contacted by the Justice Department, but she was "aware of other White House officials who have been reached out to by DOJ and are planning to cooperate."

"I don't want to get ahead of their announcements, but I think you could piece it together based on who has testified before the January 6 committee. Again, these are not -- these are related but separate-track investigations and I think DOJ is keeping an eye on who is coming before January 6 and who may have helpful information," she said.