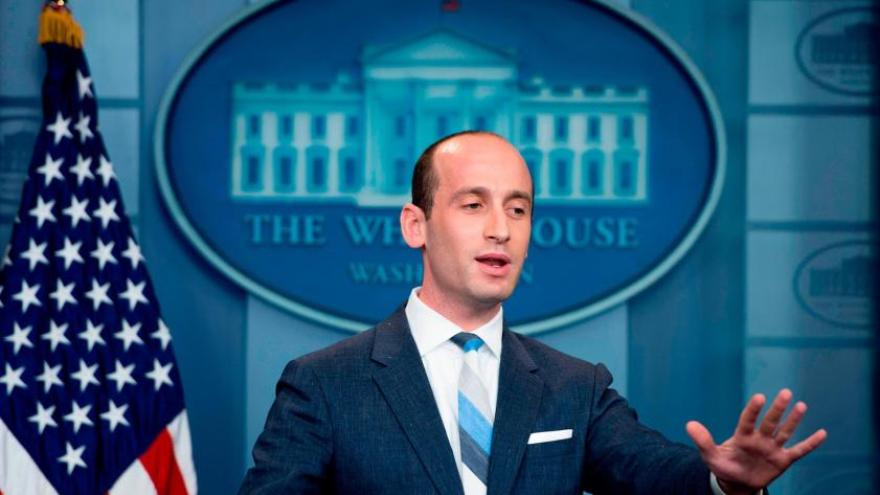 Former Trump senior adviser Stephen Miller, here speaking during the press briefing at the White House on August 2, 2017, has been subpoenaed by the Justice Department.

(CNN) -- Stephen Miller, a former White House speechwriter and senior adviser under President Donald Trump, has been subpoenaed by the Justice Department, a source tells CNN.

The department is seeking information about the Save America PAC, alleged "fake electors," and communications between Miller and a long list of people.

CNN has previously reported that a federal grand jury is examining the Save America leadership PAC, one of former President Donald Trump's main political and fundraising vehicles, in an expansion of the criminal investigation into the events surrounding the US Capitol attack on January 6, 2021.

There has been no evidence publicly that Miller has any involvement in the fake electors plot.

Miller's attorney did not immediately respond to a call for comment.

The New York Times was the first to report Miller had been subpoenaed.

According to multiple sources familiar with the subpoenas, which were issued by a grand jury in Washington, DC, the Justice Department is seeking information related to the formation, fundraising and expenditures of Save America, which has amassed more than $100 million in contributions since it was formed in November 2020.

William Russell, a senior adviser to Trump, was the recipient of one of the subpoenas on Wednesday. Brian Jack, a White House political director under Trump, was also subpoenaed this week, according to the Times.

According to one source familiar with the language in the subpoenas, investigators may be looking into whether people associated with the Save America PAC defrauded people out of money using claims they knew to be false about the 2020 election being stolen.

Some of the subpoenas also requested any information that recipients previously turned over to the House select committee investigating the January 6 Capitol riot and communications recipients may have had with a broad list of people who worked to overturn the 2020 election results -- including former Trump lawyers Rudy Giuliani and Victoria Toensing, and Boris Epshteyn, an adviser to Trump's 2020 campaign, among others.

That included communications with a list of people from various states, according to two subpoenas described to CNN.