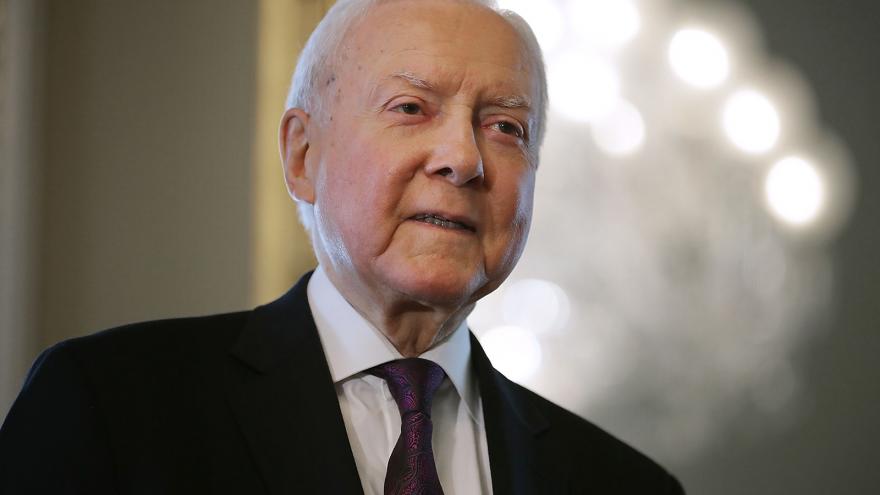 (CNN) -- Former Utah Sen. Orrin Hatch, the longest-serving Republican senator in US history, died in Salt Lake City on Saturday at the age of 88.

Hatch, the former Senate president pro tempore, served in the chamber for 42 years from 1977 to 2019. The Hatch Foundation confirmed his death in a release, which did not include a cause.

"A man of wisdom, kindness, character, and compassion, Orrin G. Hatch was everything a United States Senator should be," said A. Scott Anderson, chairman of the Hatch Foundation. "He exemplified a generation of lawmakers brought up on the principles of comity and compromise, and he embodied those principles better than anyone. In a nation divided, Orrin Hatch helped show us a better way by forging meaningful friendships on both sides of the aisle."

An ardent conservative, Hatch favored corporate tax cuts, limited government, deregulation and military spending during his time in office. He consistently voted against gay rights, abortion and stricter gun laws; he reached across the aisle on issues including AIDs education and stem cell research as well as the DREAM Act.

As the ranking Republican on the Senate finance committee, Hatch ushered in the 2017 Tax Cuts and Job Act during the Trump administration, which was lauded as the biggest tax code change in three decades and criticized for favoring corporations and the wealthy.

Hatch announced in January 2018 that he wouldn't seek re-election, shortly after his local newspaper The Salt Lake Tribune called for him to step down. His retirement cleared the way for Mitt Romney, a Utah Republican and 2012 presidential candidate, to return to elected office by running for and winning his seat. Romney was and remains a critic of Trump.

Ahead of the Hatch's retirement announcement, then-President Trump urged him to stay in Washington. During a 2017 event in Utah, Trump called Hatch "a true fighter" and said he hoped the Republican would continue to serve "in the Senate for a very long time to come."

Hatch spoke at the time about growing partisanship in Congress.

"My heart is heavy because it aches for the times when we actually lived up to our reputation as the world's greatest deliberative body. It longs for the days in which Democrats and Republicans would meet on middle ground rather than retreat to partisan trenches," Hatch said in a farewell speech on the Senate floor in December 2018.

Hatch served through the administrations of seven US Presidents and worked with nine Senate majority leaders. During his time in office, he served as chairman of the Senate Labor and Human Resources Committee, Senate Judiciary Committee and the Senate Finance Committee. In 2000, Hatch made a bid for the Republican presidential nomination but lost to former President George W. Bush.

He authored and co-authored several pieces of historic legislation such as the Religious Freedom Restoration Act, the Drug Price Competition and Patent Term Restoration Act, the State Children's Health Insurance Program and the Americans with Disabilities Act, his foundation's release said.

President Joe Biden, who served with Hatch in the Senate for 32 years, recalled his late colleague as a "fighter" who "never humored a bully, or shied from a challenge" but was also a "man of deep faith; a gentle soul."

"This was the Orrin who looked out for the people who often didn't have a voice in our laws and our country. I saw this in his efforts to pass the Americans with Disabilities Act and the Children's Health Insurance Program," the President said in a statement Sunday.

Hatch's tenure on the Judiciary Committee coincided with the confirmation of Justice Clarence Thomas in 1991. During Thomas' Senate confirmation hearings, Hatch suggested that Anita Hill, who had testified that Thomas sexually harassed her when he was her boss, had concocted some of her claims. (Biden was chair of the Judiciary Committee at the time.) Hatch was also supportive of Trump's high court nominees Neil Gorsuch in 2017 and Brett Kavanaugh in 2018.

The late senator was also the chairman emeritus of the Hatch Foundation, which focuses on civic engagement and political discourse and is home to his legislative records.

"Born the son of a carpenter and plaster lather, he overcame the poverty of his youth to become a United States Senator. With the hardships of his upbringing always fresh in his mind, he made it his life's mission to expand freedom and opportunity for others—and the results speak for themselves. From tax and trade to religious liberty and healthcare, few legislators have had a greater impact on American life than Orrin Hatch," Sandgren said.

Trump remembered Hatch as "a true warrior for our Country, for liberty, and for his beloved state of Utah," in a statement posted to Twitter by his spokesperson Liz Harrington.

Romney on Twitter recognized Hatch as "a man of vision and unparalleled legislative accomplishment."

"Our judiciary, our economy and our national character are more elevated and more secure thanks to his years of leadership," he said.

Utah GOP Sen. Mike Lee called Hatch "a giant of the Senate and a pillar" in their state.

"Orrin was a friend, a mentor, and an example to me and countless others. I saw countless times how his brilliant mind, quick wit, and care for his nation, his state, and his colleagues turned pernicious problems into clear paths forward," Lee said on Twitter. "His example of dedicated, principled statesmanship and consistent collegiality is missed but will never be forgotten."

Sen. Amy Klobuchar, a Minnesota Democrat, said on Twitter that Hatch "was kind to me and we worked together well. There were a lot of differences including party, height, age...you name it...but somehow we always looked for common ground."

"This breaks my heart," Utah Gov. Spencer Cox, a Republican, said in a tweet. "Abby and I are so grateful for the opportunities we had to spend time with this incredible public servant. He was always so kind and generous with his time and wisdom. Utah mourns with the Hatch family."

Hatch was born in 1934 and grew up in a poor mill town outside of Pittsburgh. He had spoken of how the loss at an early age of his brother Jesse, who died during World War II, affected him. A devout Mormon, Hatch was a prolific writer of religious music. In the late '60s, Hatch moved to Utah where he practiced law and raised a family.

Hatch is survived by his wife, Elaine, and their six children.