Former Sen. Johnny Isakson dies at the age of 76 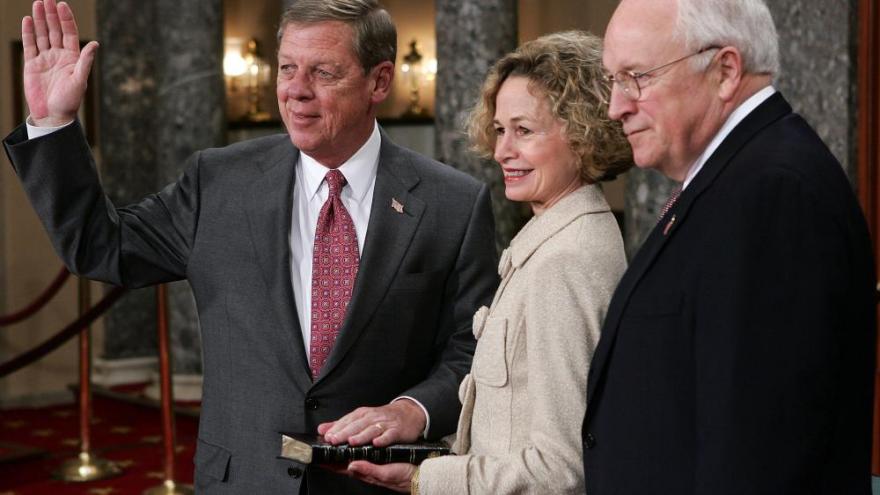 Former Sen. Johnny Isakson dies at the age of 76. Isakson poses for photographers with his wife, Dianne, and Vice President Dick Cheney on Capitol Hill on January 4, 2005, in Washington, DC.

(CNN) -- Former Georgia Sen. Johnny Isakson, a Republican who held a long career in politics, has died at the age of 76.

Georgia Gov. Brian Kemp said in a statement Sunday the Peach state "lost a giant" and remembered Isakson as "one of its greatest statesmen, and a servant leader dedicated to making his state and country better than he found it."

"Johnny Isakson personified what it means to be a Georgian. Johnny was also a dear friend to Marty, the girls, and me - as he was to so many," Kemp said in a statement.

Isakson died just days ahead of his 77th birthday, according to the official Biographical Directory of the United States Congress.

He served as senator for nearly 15 years until he resigned from office in 2019 citing health concerns. He had surgery to remove a growth on his kidney at the time of his announcement and was recovering from a fall that fractured four ribs, all while his Parkinson's disease continued to progress.

"I am leaving a job I love because my health challenges are taking their toll on me, my family and my staff," Isakson said at the time. "With the mounting health challenges I am facing, I have concluded that I will not be able to do the job over the long term in the manner the citizens of Georgia deserve. It goes against every fiber of my being to leave in the middle of my Senate term, but I know it's the right thing to do on behalf of my state."

Born in Fulton County, Georgia, he began his official political career as a member of the state's general assembly in 1976. He launched an unsuccessful bid to be governor of Georgia in 1990 and was elected to the state Senate in 1992. Isakson also ran for US Senate in 1996 and was chair of Georgia's Board of Education before he won a seat in the US House, where he served in the chamber from 1999 to 2004.

President Joe Biden mourned the death of Isakson, calling him "a patriot and a gentleman," in a statement Sunday.

"Johnny was a proud Republican, but he put country before party, and valued building consensus over political combat. I always loved Johnny's description of the only division he saw as between 'friends and future friends,'" Biden wrote. "In Johnny's memory, let us heed the wisdom he offered upon retiring from the Senate, where he urged everyone to devote less energy to describing problems and more effort to working together to provide answers."

Atlanta Mayor Keisha Lance Bottoms on Sunday called the former senator "a friend," adding Isakson was "a true statesman with a servant's heart, he was always attentive to the needs of our communities."

Former Republican Sen. David Perdue, who was in the Senate with Isakson from 2015 until Isakson retired, also remembered his fellow Georgian in a statement Sunday morning.

"Johnny was an effective colleague, a mentor I looked up to, and a friend whom I deeply cherished," Perdue wrote. "The last few years have not been easy for Johnny, but he responded to every obstacle with stalwart resilience. His dry wit and kind heart will be missed by everyone who knew him."