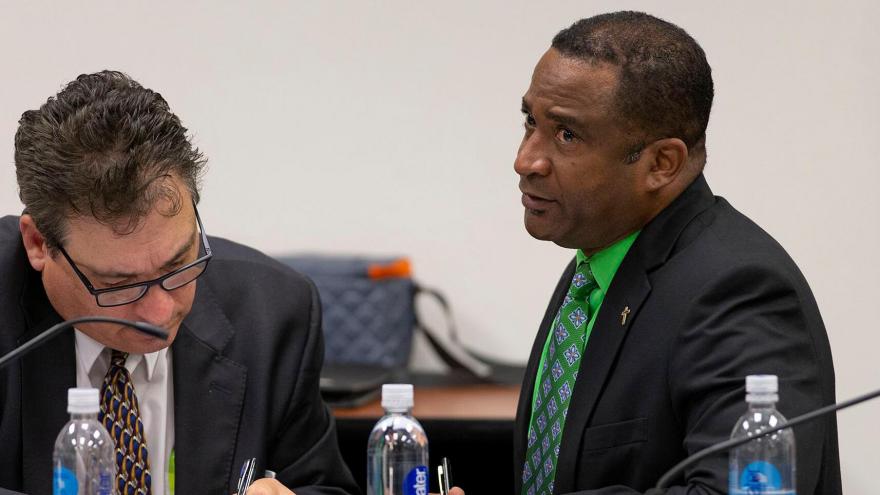 Former principal William Latson, right, and his attorney confer at a court hearing in West Palm Beach, Florida, on February 4.

(CNN) -- A former high school principal in Florida, who was fired last year after appearing to cast doubt on the historical truth of the Holocaust, has been rehired in a new position.

It's unclear what his new position will be, though a school board member said at the meeting that staff had assured her he would not be over Spanish River or another high school.

The board's decision came after an administrative law judge recommended in August that the board rescind Latson's termination and award him back pay, stating that the records fail to show that he "engaged in misconduct in office, incompetence, or gross insubordination."

The school district declined to answer specific questions about his rehiring.

A parent asked in 2018 how the school teaches the Holocaust

In April 2018, a parent reached out to Latson with a question about how the school handles the Holocaust in its curriculum and later asked him to clarify his initial response.

"... Not everyone believes the Holocaust happened and you have your thoughts, but we are a public school and not all of our parents have the same beliefs," Latson replied, according to the judge's order.

He continued, "I can't say the Holocaust is a factual, historical event because I am not in a position to do so as a school district employee."

The exchange received wider attention after The Palm Beach Post published excerpts from the emails in July 2019.

Shortly after the exchanges were published, the school district reassigned Latson to another post within the district, before deciding to fire him in October of that year.

Latson did not return a phone call requesting comment on Friday afternoon.

Not everyone agreed with the decision

The school board was divided over whether to reinstate Latson.

"I just think that if we rehire Dr. Latson it is going to be a stain on this school district that will never go away," said board member Karen Brill said at the meeting, who voted against rehiring him. "And it's not just a local stain in Palm Beach County, it's a national stain."

But others argued that while Latson's comments about the Holocaust were a serious cause for concern, they didn't rise to the level of termination.

"It's bad stuff that happened with him saying this and back and forth," board member Marcia Andrews said, who voted to reinstate Latson. "But we have to train our people to help them to know that they must be better."

Another said that though it appeared Latson was trying to "bend over backwards to accommodate somebody," she didn't believe that he was genuinely a Holocaust denier.

"I'm not defending his stupid statements, trust me," said board member Debra Robinson. "They actually disgust me. But I don't think his statements represent the body of his work."

Latson did not attend the meeting.

The district affirmed that the Holocaust occurred

After the news of the email exchanges broke last year, Latson told the Palm Beach Post that he regretted his words.

"I regret that the verbiage that I used when responding to an email message from a parent, one year ago, did not accurately reflect my professional and personal commitment to educating all students about the atrocities of the Holocaust," he said in a statement to the newspaper in July 2019.

The district said last year that Latson had been counseled about his choices and had traveled to Washington, DC, to visit the US Holocaust Museum and learn more about the mass genocide perpetrated by the Nazi regime that took the lives of 6 million Jews in Europe.

The district also affirmed that the Holocaust took place, and said it had previously asked Latson to expand his school's Holocaust curriculum.

"Every generation must recognize, and learn from, the atrocities of the Holocaust's incomprehensible suffering and the enduring stain that it left on humankind," Palm Beach County school board Chairman Frank Barbieri Jr. said in a statement in July 2019.