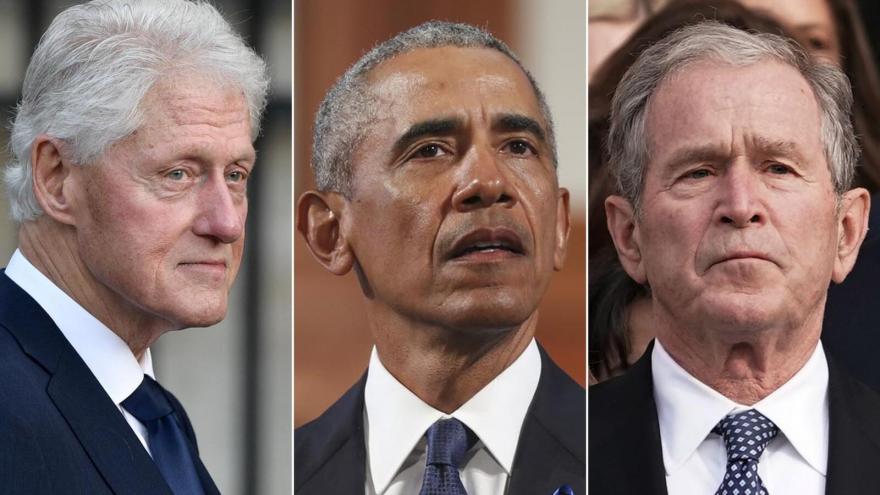 Appearing side-by-side in a video message recorded as part of the "Celebrating America" inauguration concert, the trio each wished Biden well as he stepped into the White House. Their message stood in stark contrast to former President Donald Trump, who didn't attend Biden's inauguration and ignored nearly every element of a peaceful handoff of presidential power.

"I think the fact that the three of us are standing here talking about a peaceful transfer of power speaks to the institutional integrity of our country," Bush, a Republican, said in the video. "America's a generous country, people of great hearts. All three of us were lucky to be the president of this country."

Bush added that he was pulling for Biden's success, stating, "Your success is our country's success. God bless you."

"One of my fondest memories of the inauguration, was the grace and generosity that President Bush showed me, and Laura Bush showed Michelle," he said.

That was a reminder, Obama said, "that we can have a fierce disagreements and yet recognize each other's common humanity and that, as Americans, we have more in common than what separates us."

Clinton, meanwhile, said the US was "ready to march" with Biden and called it an "exciting time" for America despite the immediate challenges Biden's administration now faces.

"I'm glad you're there. And I wish you well," Clinton, a Democrat, said. "You have spoken for us today. Now you will lead for us."

Biden had said earlier Wednesday that Trump left him a "very generous letter" but would not immediately reveal the contents of the letter.

In his farewell address on Wednesday, Trump did not name Biden, but said he wished the "new administration great luck and great success."

The comment came after Trump spent months lying about the presidential election being rigged against him and spreading baseless conspiracy theories about voter fraud. He was impeached after the House passed a charge of incitement of insurrection for his actions before a violent mob stormed the US Capitol, which left five people dead including a Capitol Police officer. There will be a trial in the US Senate that is expected to begin soon.