'A great lion with a big heart': Former presidents and dignitaries pay tribute to Powell 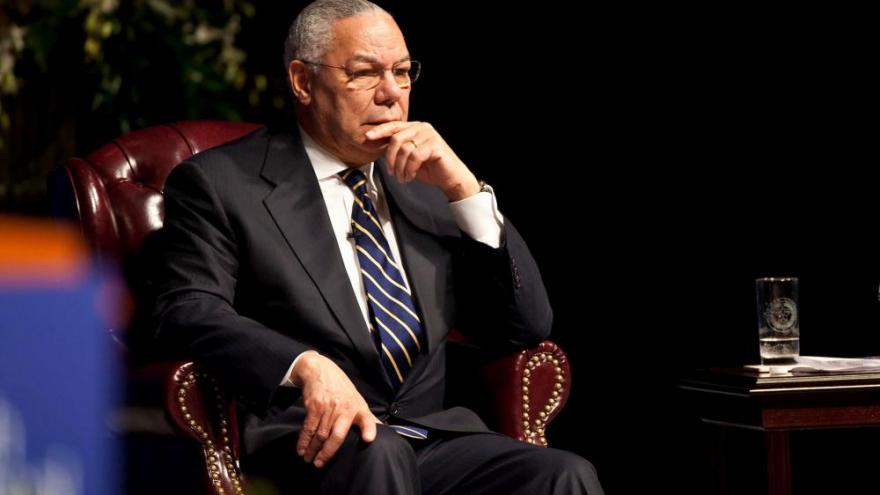 Colin Powell is shown here in this file photo attending an event honoring the 20th anniversary of the Persian Gulf War on January 20, 2011 in College Station Texas. The Washington National Cathedral on Friday will host a funeral for the late Secretary of State.

(CNN) -- Gen. Colin Powell was remembered Friday as a patriotic statesman who served his country in peace and war at a funeral service that was marked not only by its reverence for the former secretary of state but by a bipartisan attendance of former presidents and dignitaries who paid tribute to the late giant of Washington.

While much was made of his leadership and life of public service in tributes to Powell, friends and family shared personal anecdotes and mourned him as a family man and "a great lion with a big heart." Powell died on October 18 from complications from Covid-19 at the age of 84.

"The example of Colin Powell does not call on us to emulate his resume, which is too formidable for mere mortals. It is to emulate his character and his example as a human being. We can strive to do that. We can choose to be good," former FCC chair Michael Powell, Powell's son, said in a moving tribute to his father.

"My father made a monumental difference. He lived, he lived well. I've heard it asked, 'Are we still making his kind?' I believe the answer to that question is up to us. To honor his legacy, I hope we do more than consign him to the history books. I hope we recommit ourselves to being a nation where we are still making his kind," he said.

At one point, Michael Powell spoke of how he held his father's hand in the ICU the night before he died and how he "felt my father's love in that hand.

"That hand that took my mother's hand in matrimony, that hand that held me as baby, that hand that signed report cards, tossed baseballs and fixed old cars, that hand that signed treaties and war orders, saluted service members and gestured joyfully while telling a story," Powell said, his voice quivering with emotion. "That hand is still now, but it left a deep imprint on the lives of family and dear friends, soldiers and sailors, presidents and prime ministers, and a generation of aspiring young people."

Richard Armitage, who shared a 40-year friendship with Powell and served for a time as Powell's deputy secretary of state, recalled Powell's "sense of humor, his insatiable curiosity and his comfort in his own skin."

Madeleine Albright, Powell's predecessor at the State Department, noted that despite their differences in background, she and Powell became close friends.

"The reason is that, beneath that glossy exterior of warrior statesman, was one of the gentlest and most decent people any of us will ever meet," Albright said.

The solemn service, which was closed to the public but broadcast on television, brought together leaders from both parties at Washington National Cathedral.

President Joe Biden and first lady Jill Biden were seated in the front pew, along with former Presidents George W. Bush and Barack Obama and former first ladies Laura Bush and Michelle Obama. Former Secretaries of State Hillary Clinton and Condoleezza Rice and current Secretary of State Antony Blinken were there, along with current Joint Chiefs of Staff Chairman Mark Milley. Former Presidents Bill Clinton, who was recently hospitalized with an infection, and Donald Trump were not in attendance.

The musical selections for the funeral's organ and brass prelude were a mix of patriotic songs, religious hymns and popular music, including Bob Marley's "Three Little Birds," a nod to his Jamaican heritage, and ABBA's "Dancing Queen," as Powell was a noted fan of the Swedish pop group.

Armitage also spoke of Powell's love of music and of the church, and how nothing made him happier than to "sneak away" from his security detail when he was working at State.

Michael Powell said his father's "zest for life derived from his endless passion for people."

"He was genuinely interested in everyone he met. He loved the hot dog vendor, a bank teller, a janitor and a student as much as any world leader," he said of his father.

Michael Powell added that while his father was famous for his "13 rules," "our family life was unregimented" and their home was "warm and joyous and loving."

Powell's daughter, Annemarie Powell Lyons, also delivered a reading from the Bible during the service.

Considered a "favorite" of presidents, Powell served in several top roles in Republican administrations, most famously in the younger Bush's administration.

Powell was also national security adviser to former President Ronald Reagan and chairman of the Joint Chiefs of Staff for former President George H. W. Bush. He was the first African American man in US history to fill those roles.

He again broke barriers when President George W. Bush selected him to be the 65th secretary of state. When he was sworn-in in 2001, Powell became the first Black US secretary of state and the highest-ranking Black public official to date in the country, standing fourth in the presidential line of succession.

Powell's legacy would be defined by two US wars against Iraq. He was viewed as a hero in the 1991 Gulf War, overseeing Operations Desert Shield and Desert Storm.

His record, however, was marred by his 2003 speech before the United Nations, in which he pushed faulty US intelligence about weapons of mass destruction to advocate for the US to go to war with Iraq. Powell left public office in January 2005.

Despite spending majority of his public service career in Republican administrations, Powell would later support Democratic presidential candidates and told CNN after the January 6 attack at the US Capitol that he no longer considered himself a Republican.

He broke with his party to support Obama's 2008 campaign and endorsed him again in 2012. Powell voted for Hillary Clinton in 2016 over Trump, whom he called a "national disgrace and an international pariah," and supported Biden over Trump's bid for a second term in 2020.

Powell also had a storied military career, serving two tours of duty in South Vietnam in the 1960s.

He is survived by his wife, Alma Vivian (Johnson) Powell, whom he married in 1962, as well as three children.