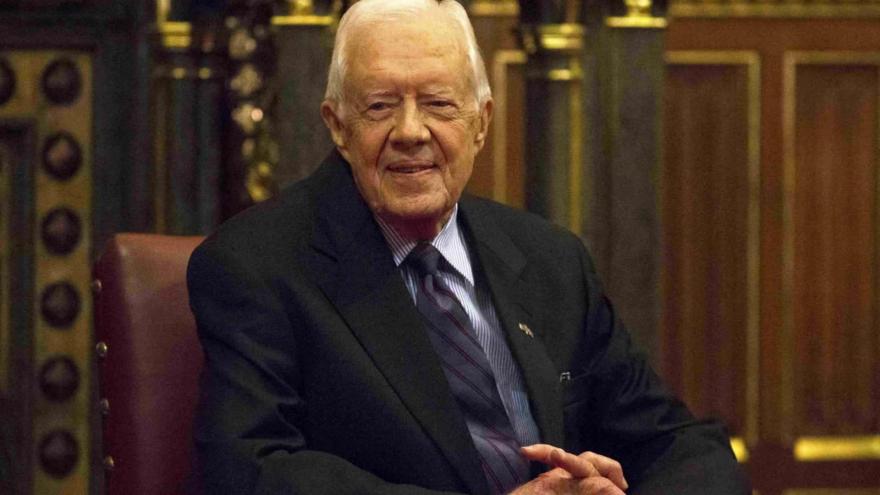 Former President Jimmy Carter will receive the coronavirus vaccine 'when it is available to him.'

"After consulting with his doctors, President Carter is looking forward to receiving the COVID-19 vaccine when it is available to him," the center said in a short statement Thursday night posted on Twitter. Carter is 96 years old.

The news comes after fellow former Presidents Barack Obama, George W. Bush and Bill Clinton said earlier this month that they would get Covid-19 vaccines publicly to prove it's safe.

At the time of the trio's announcement, The Carter Center emphasized Carter's and his wife's support for vaccine efforts.

"Former U.S. President Jimmy Carter and his wife, Rosalynn, said today that they are in full support of COVID-19 vaccine efforts and encourage everyone who is eligible to get immunized as soon as it becomes available in their communities," the Carter Center said in a statement on Twitter at the time.

Carter joins a growing group of presidents and vice presidents past, present and future who are willing and expected to get vaccinated.

Vice President Mike Pence, second lady Karen Pence and US Surgeon General Dr. Jerome Adams are all scheduled to be publicly inoculated on Friday as part of a campaign to combat vaccine hesitancy in the United States. President Donald Trump, who was recently treated for Covid-19 with a monoclonal antibody cocktail, will not be vaccinated until it is recommended by the White House medical team, a White House official told CNN earlier this week.

The President-elect and vice president-elect are also planning on getting vaccinated when possible. President-elect Joe Biden is expected to get his first Covid-19 vaccination shot early next week, CNN has learned, and plans to get it in public, as he told CNN's Jake Tapper during an interview earlier this month that he would "be happy to" do.

Vice President-elect Kamala Harris will also receive the vaccine in a public setting, transition officials told CNN on Wednesday, though the timing and logistical details remain up in the air.

Some government officials have already been inoculated. Acting Secretary of Defense Christopher Miller received his vaccine Monday afternoon at Walter Reed National Military Medical Center. The Navy's top admiral, Chief of Naval Operations Mike Gilday, encouraged sailors on Tuesday to get the vaccine, adding that he plans to receive it "shortly."