Spokesman: George HW Bush is eager to get well, go to Maine 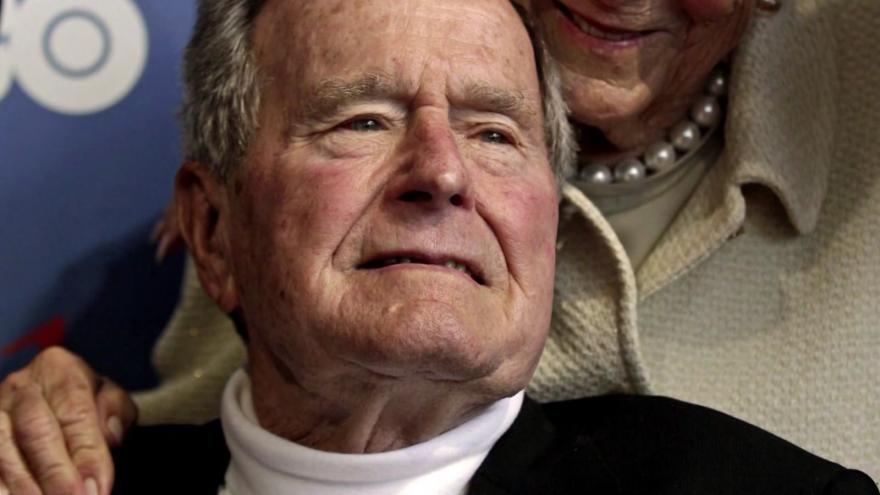 HOUSTON (AP) — Former President George H.W. Bush has been hospitalized in Houston with an infection, just after attending the funeral of his wife, Barbara, a spokesman said.

Jim McGrath said Monday on Twitter that the 93-year-old Bush is "responding to treatments and appears to be recovering." He was admitted Sunday morning to Houston Methodist Hospital after an infection spread to his blood, McGrath said.

Barbara Bush was laid to rest Saturday in a ceremony attended by her husband and former presidents Bill Clinton, Barack Obama, George W. Bush and their wives, along with current first lady Melania Trump. Mrs. Bush was 92, and she and her husband had been married 73 years — the longest presidential marriage in U.S. history.

George H.W. Bush uses a wheelchair and an electric scooter for mobility after developing a form of Parkinson's disease, and he has needed hospital treatment several times in recent years for respiratory problems.
He attended the funeral wearing a pair of knitted socks decorated in blue, red and yellow books — a tribute to his late wife's work promoting literacy.

McGrath wouldn't elaborate Monday night on the specifics of Bush's condition, saying additional updates would be issued "as events warrant." But he said the 41st president was eager to get well so he can get to his summer home in Kennebunkport, Maine.
"He's the most goal-oriented person on this planet," McGrath said.

Former Florida Gov. Jeb Bush indicated during his eulogy Saturday that his father had been hospitalized recently at the same time Barbara Bush was in the hospital for the last time. Those hospitalizations were not publicly disclosed at the time.
"I think Dad got sick on purpose so that he could be with her," Jeb Bush said.

On Friday, during the public viewing of Barbara Bush's casket, George H.W. Bush offered his hand to many of the around 2,500 people who walked through the church to pay their respects.

The elder Bush was hospitalized for 16 days in January 2017 for pneumonia. During that hospital stay, which included time in intensive care, doctors inserted a breathing tube and connected him to a ventilator.

He also was hospitalized in 2015 in Maine after falling at home and breaking a bone in his neck, and in December 2014 for about a week for shortness of breath. He spent Christmas 2012 in intensive care for a bronchitis-related cough and other issues.

People in their 90s with Parkinson's disease are often at higher risk of pneumonia and other infections because their swallowing process can be compromised, said Dr. David Reuben, professor of geriatric medicine at the UCLA medical school in Los Angeles.
"And the stress of losing a loved one can weaken the immune system," he said.

Bacterial infections are treated with antibiotics, he said, while viral infections require other treatments. Infections that spread to the blood usually are not viral, however, he said.

The prognosis for such a case would depend on a number of factors, including heart rate, blood pressure and oxygenation, Reuben said.
"The more of these parameters are abnormal, the more serious the case is," he said.

(CBS 58) -- Former President George H.W. Bush is in intensive care, according to a report by CNN.

"President Bush was admitted to the Houston Methodist Hospital yesterday morning after contracting an infection that spread to his blood. He is responding to treatments and appears to be recovering. We will issue additional updates as events warrant," spokesman Jim McGrath said in a statement.

His wife, former first lady Barbara Bush, died Tuesday at the age of 92 and was buried Saturday.

This story is a developing story. Stay tuned for updates on air and online.