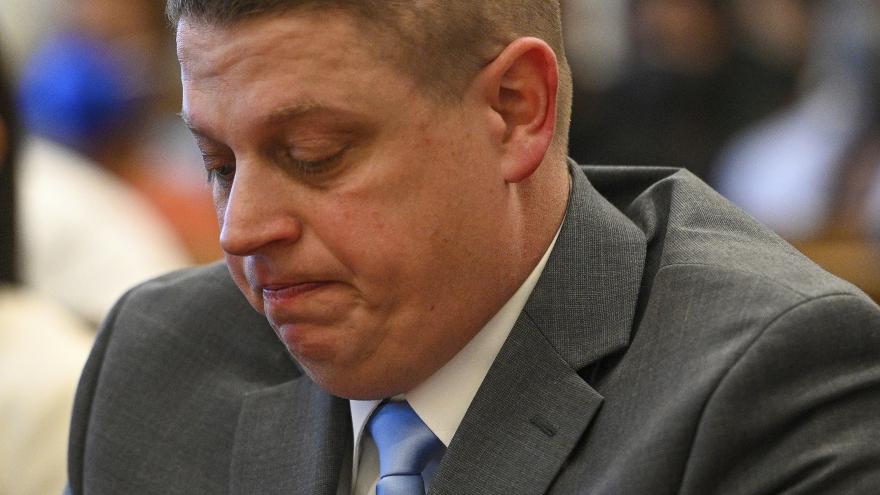 Originally Published: 05 MAR 22 08:00 ETBy Andy Rose and Aya Elamroussi,(CNN) -- A former Kansas City police officer convicted in the killing in 2019 of a Black man who was backing a pickup truck into his garage was sentenced Friday to six years in prison and will remain free on bond while his conviction is appealed.

Eric DeValkenaere, who's White, was sentenced to three years for the involuntary manslaughter of Cameron Lamb and six years for armed criminal actions, Valerie Hartman, a spokesperson for the 16th Judicial Circuit Court, told CNN.

"The mental pain that I deal with -- that's not going to go away," Bey said.

Defense attorneys had requested DeValkenaere remain free following his sentencing as they appeal his November conviction, according to CNN affiliate KSHB.

Last month, Judge Youngs granted that request, saying he did not believe incarceration was necessary during the appeals process.

"He's known that since November and yet here he is," Youngs said. "If he was a flight risk, I don't know that I would have waited if I were Mr. DeValkenaere to fly to Panama. I think I probably would have done it ... after I rendered my verdict in the case," Youngs said, reports CNN affiliate KSHB.

The affiliate said it was the first time the judge had granted such an appeal bond in his 13 years on the bench.

The fatal shooting happened on December 3, 2019, when DeValkenaere and his partner responded to a traffic incident involving a red pickup truck in Kansas City, according to the indictment.

A police helicopter had observed a red pickup truck driving, and entering a driveway at the back of a home. The officers, dressed in plain clothes and wearing police department vests, arrived at the home and entered the backyard without a legal warrant and with their guns drawn, the indictment states.

Lamb was "slowly backing" the pickup truck down a ramp into the basement garage, and DeValkenaere's partner was on Lamb's side of the truck and could see him when he arrived. The officers attempted to tell Lamb to stop, but it's unclear whether he heard them, the indictment says.

DeValkenaere fired four times at Lamb, claiming he saw Lamb's left hand reach for a gun and point it at his partner.

"I remember thinking, 'No, this can't happen. I can't let this happen," DeValkenaere said, on the witness stand during the trial, reports KSHB.

"Right," DeValkenaere said before grabbing a Kleenex to dab tears from his eyes.

But according to his partner, Lamb had his left hand on the steering wheel, with his fingers spread apart, and Lamb also held up his left hand with no gun in it, the indictment states. Two of the bullets struck Lamb, it says.

Investigators identified a gun on the ground beneath Lamb's left hand where the truck finally came to rest, the indictment said.

Lamb was right-handed, and medical records later showed that he did not have full use of his left hand due to an injury before the shooting, it said.