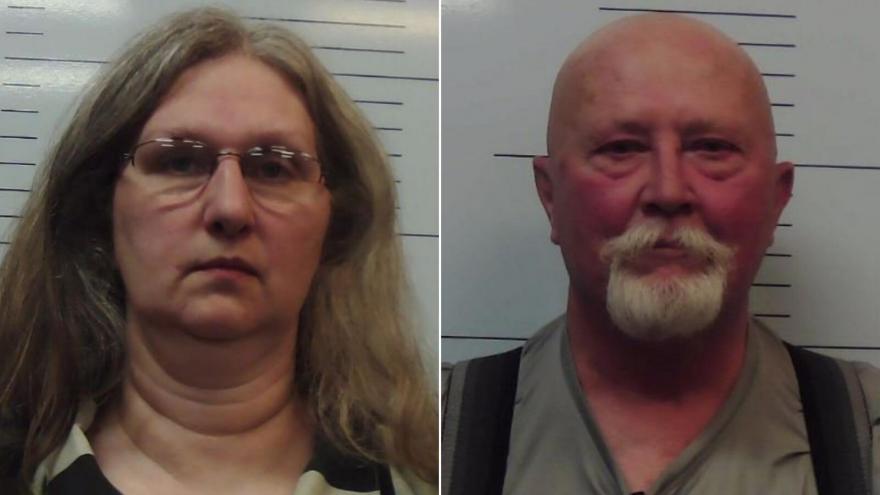 Stephanie (left) and Boyd Householder have been charged with more than 100 felonies regarding allegations of abuse at their boarding school in Missouri.

(CNN) -- The former owners of a girls' boarding school in Missouri are facing more than 100 felony charges between them related to the abuse of 16 victims at the school, according to charging documents.

Missouri Attorney General Eric Schmitt announced charges against Boyd and Stephanie Householder, the former owners and operators of the Circle of Hope Girls Ranch and Boarding School, in a press release Wednesday.

The charging documents allege physical abuse including the use of restraints by Boyd Householder as he pushed his knee into the backs of several victims, forcing victims to hold the push-up position, slamming the victims' bodies or heads against the wall, and slapping or hitting victims with his hands or belt or other things.

Boyd Householder is also accused of shoving a victim's face into horse manure and pouring hot sauce down another victim's throat, the court documents show.

"Today, my Office has filed a total of 102 criminal charges against Boyd and Stephanie Householder, proprietors of the now-defunct Circle of Hope Girls Ranch and Boarding School. The charging documents allege extensive, and horrific, sexual, physical, and mental abuse perpetrated by the Householders," Schmitt said in the release. "My Office has worked tirelessly to investigate this case and will continue to work around the clock to ensure that justice is obtained in this case."

Schmitt's office says that investigators used forensic interviews, statements and extensive documentation that was seized from the Circle of Hope property to "piece together the extent and degree of abuse" that allegedly happened there.

CNN affiliate KY3 reported in August that state investigators removed around two dozen girls from the facility in mid-August.

Both Householders plead not guilty at their initial appearance on Wednesday. Their next hearing is scheduled for March 17, court records show.

CNN has not been able to determine if the Householders have legal representation. Both the Missouri Public Defenders office and an attorney previously hired for them said they were not representing them.

CNN has reached out to the AG's office for more information on their legal representation and an affidavit.

The Householders have previously told the Kansas City Star that they denied ever abusing a student.

"They're angry and they're bitter, and they want to blame somebody," Stephanie Householder told The Star in September about the students. "They feel like they're victims, and they just want to take their anger out on somebody."

Schmitt's office is still looking to identify and contact victims.