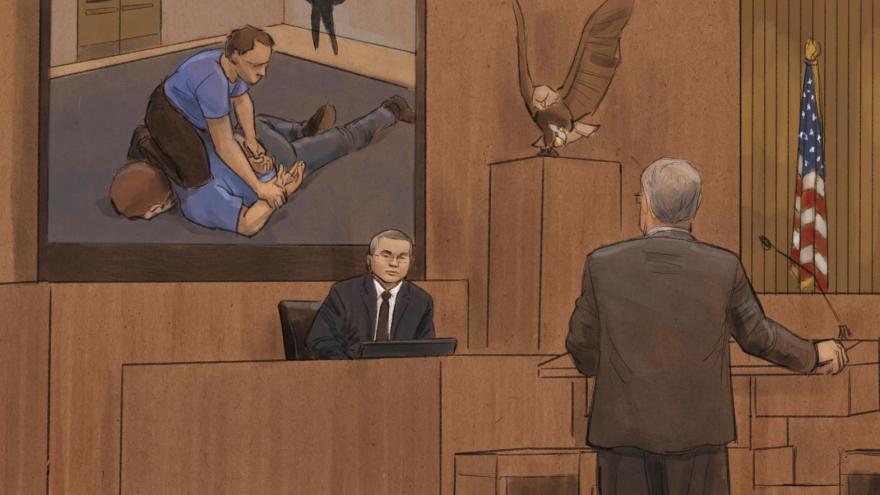 Former Minneapolis police officer Tou Thao is pictured in a courtroom sketch testifying at his trial in the killing of George Floyd on Tuesday, February 15.

(CNN) -- Cross-examination of Tou Thao got tense Wednesday as the ex-officer snapped at the prosecutor for asking why he didn't tell Derek Chauvin to get off George Floyd's neck and back during the 9 minutes and 29 seconds.

"I think I would trust a 19-year veteran to figure it out," Thao said on the stand.

Thao is one of three officers -- including J. Alexander Kueng and Thomas Lane -- standing trial in federal court for violating Floyd's civil rights.

All three are each charged with deprivation of rights under color of law as Chauvin restrained Floyd. Thao and Kueng are also charged with willfully failing to intervene in Chauvin's use of unreasonable force, resulting in Floyd's death.

The three have pleaded not guilty to the federal charges and are being tried together. Chauvin admitted guilt in December as part of a plea deal.

All three former officers will face a state trial later this year on charges of aiding and abetting in Floyd's murder.

Kueng and Thao told US District Judge Paul Magnuson on Monday they planned to testify in their own defense.

Lane, the rookie officer who held down Floyd's legs during the fatal restraint, told the judge Tuesday that he also planned to take the stand. His attorney Earl Gray had told Magnuson a day earlier he wanted to speak with Lane about it before giving a final decision.

Kueng is expected to take the stand after Thao.

Assistant US Attorney LeeAnn Bell had been pressing Thao on his reasoning for not interfering in Chauvin's handling of Floyd, how often Thao faced toward his fellow officers during the restraint that lead to Floyd's death and whether Thao took any action to assess Floyd's medical condition, including when he was asked to do so by a bystander.

"Did you communicate to your partners what you were being told by the bystanders," Bell asked.

Bell also asked Thao if he knew when Floyd stopped breathing, but defense attorney Robert Paule objected to the question. It was one of a dozen objections during Wednesday morning's cross-examination. Bell seemingly became frustrated at the number of times she had to pause and rephrase her questions due to the number of objections.

"Did you hear him talking during the fifth minute or not?" Bell pressed.

"It's a possibility," Thao said. When asked if he could confirm if he noticed Floyd's eyes were closed, Thao said he couldn't tell.

Bell continued asking Thao about his knowledge of Floyd's medical condition, of which Paule continued to vehemently object.

During redirect, Paule asked Thao why he thought it was necessary to restrain Floyd.

Thao said that one of the purposes for restraining Floyd was to protect him from potentially getting up and injuring himself or bystanders, adding the measure was partly done "to save his life."

"Were your intentions in any way to cause Mr. Floyd harm?" Paule asked.

Defense attorneys also called Thao's wife, Sheng Yang, to testify later Wednesday morning. Yang told the jury her husband "had never gotten into trouble before with the law," and that Thao had never even received a parking ticket.

After Bell objected to the relevance of the questioning, Judge Magnuson instructed Paule to move on saying "we aren't going into speeding tickets. I assure you of that."

Thao said using a knee was commonplace in MPD

During his testimony Tuesday, Thao testified that an officer using their knee to restrain a suspect was taught at the police academy. He also said he assumed other officers were "taking care" of Floyd while he was helping control the crowd.

Paule showed the jury several photographs from Thao's time in the police academy that pictured instructors using their knees to subdue and arrest subjects during training exercises.

Calling one such photo a "handcuffing drill," Thao said it was common practice to be taught how to subdue people in a prone position while using a knee to control the person.

"Do you see if those two officers are using their knees?" Paule asked Thao.

"They are," Thao responded.

One photo showed a use-of-force instructor smiling while his knee is on the neck of the subject in the exercise.

"Is this something that was typically taught at the academy while you were there?" Paule continued.

When asked why a knee would be used in the exercises, Thao said it was "to prevent them from rolling around or get up."

During the incident that led to Floyd's death, Thao testified that even though he had been waived off from responding to the scene after other officers had arrived, he decided to continue assisting.

"From my experience, Cup Foods is hostile to police," he told the jury. "It's a well-known Bloods gang hangout."

Thao said he thought "it was obvious" Floyd was under the influence of drugs or alcohol, partly because he was "very sweaty."

As the scene grew more tense and chaotic, Thao testified his role shifted to becoming a "human traffic cone," ensuring that cars would not hit the officers and the ambulance that had been called could easily spot them.

"I knew the crowd was starting to gather up and cause issues," Thao said. "At that point, I have a different role, which is to do crowd control to allow them to attend to Mr. Floyd."

Juror dismissed due to stomach flu

A juror was dismissed Wednesday because they contracted the stomach flu or had eaten something and as a result is ill," Judge Magnuson said.

The juror was one of the five alternates, court spokeswoman Rebeccah Parks confirmed to CNN.

The 12 juror panel is still comprised of five men and seven women. There are now four alternates, one man and three women.

This is the second juror to be dismissed in the case. Last week a juror was released after disclosing that his son is dealing with a serious mental health issue.