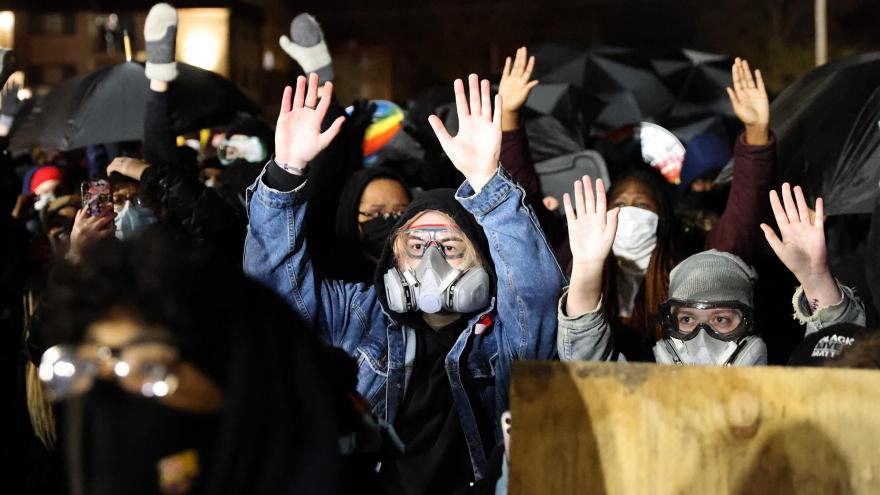 Demonstrators hold their hands up as they protest outside of the Brooklyn Center police station on April 14 in Brooklyn Center, Minnesota. This is the fourth day of protests in the suburban Minneapolis city following the fatal shooting of 20-year-old Daunte Wright by police officer Kimberly Potter.

(CNN) -- The family of Daunte Wright -- the Black motorist shot and killed by a Minnesota police officer during an arrest attempt last weekend -- sees a manslaughter charge filed against the officer as a "good initial step" toward justice, a lawyer for the relatives said Thursday.

Wright's mother Katie, however, later questioned whether even justice would be enough.

"Unfortunately there's never going to be justice for us," she told reporters Thursday.

Would justice "bring our son home to us, knocking on the door with his big smile coming in the house, sitting down eating dinner with us, going out to lunch, playing with his one-year-old, almost-two-year-old son, giving them a kiss before he walks out the door," she added. "So justice isn't even a word to me."

Wearing a plaid button-down shirt, Potter appeared remotely from the office of her attorney. She spoke only once, saying "Yes I am" when the judge asked if she was present. Her attorney, Earl Gray, waived the reading of the criminal complaint. Her preliminary hearing will be on May 17.

Wright's relatives "believe that this charge is obviously a good initial step toward trying to get justice, but there ultimately is no such thing as whole justice in this case, because the family can't have their loved one back," Storms said.

Hours later, members of Wright's family held a news conference with their lawyers.

Katie Wright said she wants accountability -- "If that even happens" -- but she still has to bury her son.

"We're still never going to be able to see our baby boy that we're never going to have again," she said. "So when people say justice, I just shake my head."

Civil rights attorney Ben Crump said Wright's mother will see her son's body at a funeral home Thursday for the first time since the shooting.

Wright's death on Sunday has roiled a Minneapolis metropolitan area scarred by other police-involved deaths, spurring days of protests and reigniting national conversations about policing and the use of force.

Authorities said Potter and another officer initially pulled Wright over for a traffic stop in the Minneapolis suburb of Brooklyn Center, then tried to arrest him after they learned he had a warrant for a gross misdemeanor weapons charge.

But prosecutors say Potter, 48, is nevertheless responsible and accountable.

"We ... intend to prove that Officer Potter abrogated her responsibility to protect the public when she used her firearm rather than her Taser," said Imran Ali, an assistant prosecutor in Washington County. Washington County prosecutors are taking the case, rather those in nearby Hennepin County -- where the shooting happened -- to avoid appearances of conflict of interest, officials have said.

At Thursday's news conference, Wright's aunt, Naisha, held up a picture of a Glock and one of a Taser.

Someone convicted of this would face a sentence of up to 10 years in prison and/or a fine of up to $20,000. CNN has sought comment from Potter's attorney, Earl Gray.

Potter, who resigned as a Brooklyn Center police officer this week, posted bail and was released from custody Wednesday, online records show.

"We are thankful tonight; the tension and anxiety and the stress seemed to be lowered," Col. Matt Langer, chief of the Minnesota State Patrol, said at a late-night news conference.

"About 24 arrests" were made, he said, which was significantly lower than the previous nights. Most of those arrested in Brooklyn Center were not residents of the city, Hennepin County Sheriff David Hutchinson said.

And for the second night in a row, no reports of looting or fires set in Brooklyn Center were made, Minnesota Public Safety Commissioner John Harrington said.

Wright's family had called for charges against Potter and, with trial of a former officer in Floyd's death taking place just 10 miles away, hundreds gathered for four consecutive days to protest Wright's death.

"My message to all who are demanding justice for (Daunte Wright) and for his family is this: Your voices have been heard, now the eyes of the world are watching Brooklyn Center and I urge you to protest peacefully and without violence," Brooklyn Center Mayor Mike Elliott said Wednesday.

What body camera footage and a court document show

According to a criminal complaint filed against Potter, she and an officer who she was training pulled Wright over Sunday in Brooklyn Center.

Police initially told reporters that the traffic stop was for an expired tag. The criminal complaint does not say why the stop was made.

During the stop, the officers learned Wright had a warrant for his arrest for a gross misdemeanor weapons charge, and Potter's trainee asked Wright to exit the car, and told him he was under arrest, the complaint reads.

Police body camera footage of the encounter was released Monday, the day after Wright's death.

The footage shows Wright standing outside his vehicle with his arms behind his back and an officer directly behind him, trying to handcuff him. An officer tells Wright "don't," before Wright twists away and gets back into the driver's seat of the car.

Potter "pulled her Glock 9mm handgun with her right hand and pointed it at Wright," the office of Washington County Attorney Pete Orput said in a news release Wednesday.

The officer whose camera footage was released is heard warning the man she's going to use her Taser on him, before repeatedly shouting, "Taser! Taser! Taser!" It's at this point, Orput's office says, that Potter "pulled the trigger on her handgun" and fired one round into Wright's left side.

"Wright immediately said, "Ah, he shot me," and the car sped away for a short distance before crashing into another vehicle and stopping," the news release reads.

An ambulance was called, and Wright was pronounced dead at the scene, Orput's release reads.

The Minnesota Bureau of Criminal Apprehension examined Potter's duty belt and found her handgun is holstered on the right side of her belt, while the Taser is on the left side, according to Orput's news release.

The Taser is yellow with a black grip and is set in a straight-draw position, "meaning Potter would have to use her left hand to pull the Taser out of its holster," reads the release, citing the criminal complaint.

Though Potter has submitted a resignation letter, Mayor Elliott said Tuesday he has not accepted it, adding, "We're doing our internal process to make sure that we are being accountable to the steps that we need to take." Earlier, he told CBS he thought Potter should be fired.

Potter is still entitled to benefits following her resignation, though it is not clear what those benefits are, acting City Manager Reggie Edwards said.

Reacting to the manslaughter charge, another Wright family attorney, Benjamin Crump, released a statement saying, "While we appreciate that the district attorney is pursuing justice for Daunte, no conviction can give the Wright family their loved one back."

"This (shooting) was no accident. This was an intentional, deliberate and unlawful use of force," Crump's statement reads.