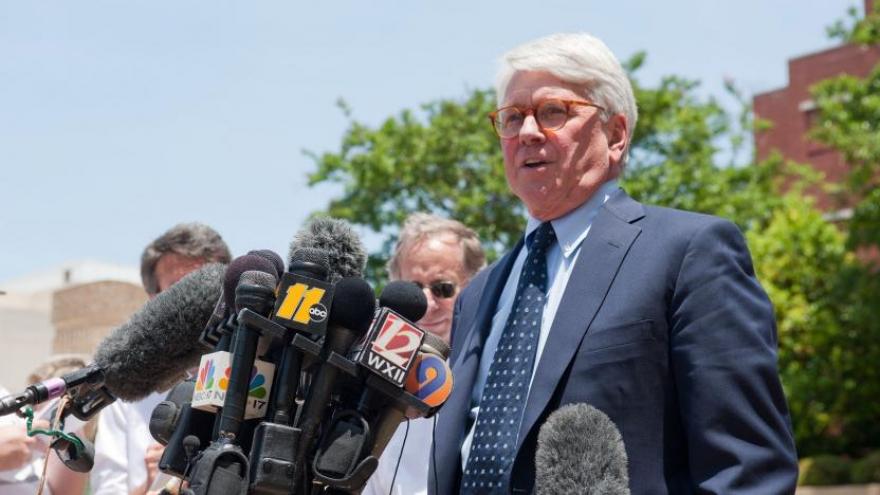 Attorneys for Greg Craig, a prominent Democratic lawyer and former White House counsel in the Obama administration, said that they expect him to be indicted by federal prosecutors in a case that stems from special counsel Robert Mueller's investigation.

(CNN) -- A federal grand jury on Thursday indicted Greg Craig, a prominent Democratic attorney who worked for two presidents, charging him with making false statements and concealing material information in connection with work he performed for Ukraine in a case stemming from special counsel Robert Mueller's investigation.

Craig, 74, is the highest-profile Democrat to be indicted in a matter connected to Mueller's work, which resulted in charges against numerous Republicans tied to President Donald Trump.

Craig was originally investigated for an alleged FARA violation, though he was charged with other crimes after the statute of limitations on FARA expired in his case.

He is scheduled to enter a plea in federal court Friday afternoon.

"This indictment accuses Mr. Craig of misleading the FARA Unit of the Department of Justice in order to avoid registration. It is itself unfair and misleading. It ignores uncontroverted evidence to the contrary," the lawyers wrote. "Mr. Craig had no interest in misleading the FARA Unit because he had not done anything that required his registration. That is what this trial will be all about."

"I am confident that both the judge and the jury will agree with me," he added.

The charges against Craig, who was White House counsel during the Obama administration, concern work he performed for Ukraine in 2012 while he was a partner at top law firm Skadden, Arps, Slate, Meagher & Flom LLP. The Justice Department has said it was Paul Manafort, who later became Trump's campaign manager, who arranged to hire Skadden to work for Ukraine, although Craig said Thursday it was Democratic political operative Doug Schoen "who first introduced the project to me."

Schoen did not immediately respond to a request for comment.

Skadden's client, the Ukrainian Ministry of Justice, hired it to write a report on the trial of Yulia Tymoshenko, a former prime minister of Ukraine, a project on which Craig was the lead attorney.

According to the indictment, from the start of the work on the report, Craig didn't want to register as an agent for Ukraine "at least in part because he believed doing so could prevent him or others at [Skadden] from taking positions in the federal government in the future."

The indictment also alleges that Craig was deterred from registering out of his desire to hide that a third party -- a private individual -- paid the firm more than $4 million for the report and that the firm had a "parallel engagement with Ukraine to assist in the prosecution of Tymoshenko on additional charges."

Craig said in his video statement that the third party was Victor Pinchuk, a Ukranian oligarch whom Craig described as "pro-Western." Pinchuk did not immediately respond to a CNN request for comment.

In late 2012, Craig had contact with several newspaper reporters at the time of the public release of the report -- a step prosecutors said in the indictment required him to register as an agent of Ukraine. But it was what came next that caused prosecutors to bring charges, according to the indictment.

After DOJ's FARA unit inquired with the firm about whether it should register as a result of its work, Craig allegedly withheld information about his contacts with reporters from attorneys at his firm and "omitted material facts regarding his acts in furtherance of Ukraine's media plan" from DOJ's FARA unit, according to the indictment.

In early 2013, when FARA unit officials asked Craig about his work for Ukraine, he gave them a letter containing "material false and misleading statements and omissions," including that he provided only "brief clarifying statements" to one of the reporters and that he had been in contact with the other reporters after the document's public release, the indictment says.

After the FARA unit then concluded that the firm needed to register as an agent of Ukraine, Craig and other Skadden attorneys met with members of the FARA unit in October 2013, and Craig "made false and misleading statements," particularly that "his media contacts were solely reactive and for the purpose of correcting misinformation." A letter he sent FARA officials two days later contained similar claims.

In 2014, "having been misled by Craig," the indictment says, the unit reversed its decision, determining that neither Skadden nor Craig needed to register as foreign agents.

The indictment says Craig repeated the problematic statements to the special counsel's office during an interview in October 2017.

In his video statement, Craig said, "I did not participate in a scheme to mislead the government or conceal material facts. I was always honest about the reason for my contacts with the media."

Craig's indictment had been expected for several weeks, with Craig's own lawyers saying Wednesday they anticipated such an outcome. It appeared likely even earlier this year, after the Justice Department's national security division settled with Skadden in January over FARA violations in an agreement that foreshadowed a possible charges against Craig.

The agreement forced the firm to turn over $4.6 million it had earned for its work for Ukraine and to retroactively register as a foreign agent. The language of the settlement appeared to pin nearly all of the blame on an unnamed partner who matched Craig's description, saying he repeatedly gave "false and misleading" statements to Justice Department officials.

It was transferred out of SDNY because, after examining Craig's case, federal prosecutors in New York concluded they had insufficient evidence to bring charges against him, CNN has reported.

Craig's attorneys met with Justice Department prosecutors in recent days in a bid to avoid charges against him, CNN has reported.

And they have fought the case for months, having made a private presentation to prosecutors in New York last year in which they made the case that when Craig spoke to reporters, in particular to a New York Times reporter who wrote an initial story on the report, it was for the purpose of preventing what he believed would be a mischaracterization of the document, and didn't coordinate his outreach with Ukraine's Ministry of Justice.

They also raised concerns that Craig's political affiliation had made him a target, and that he was being examined to compensate for an investigative emphasis on Trump-connected Republicans as a result of Mueller's probe.

Craig, who left Skadden in early 2018, is the second attorney from the firm to face charges connected to the report. Last year, Alex van der Zwaan pleaded guilty to lying to the special counsel's office, admitting that he misled investigators about his discussions related to Skadden's work in preparing the report.

The Skadden and Craig matters have prompted the Justice Department to escalate its pursuit of foreign influence operations. Last month, the head of the national security division said it had appointed a prosecutor who worked on Mueller's team to lead a revamped unit that will crack down on unregistered foreign agents.

In making the announcement, the official, John Demers, pointed to the Skadden settlement -- and alluded to the Craig case -- as having triggered the department's decision to escalate its enforcement in that area.