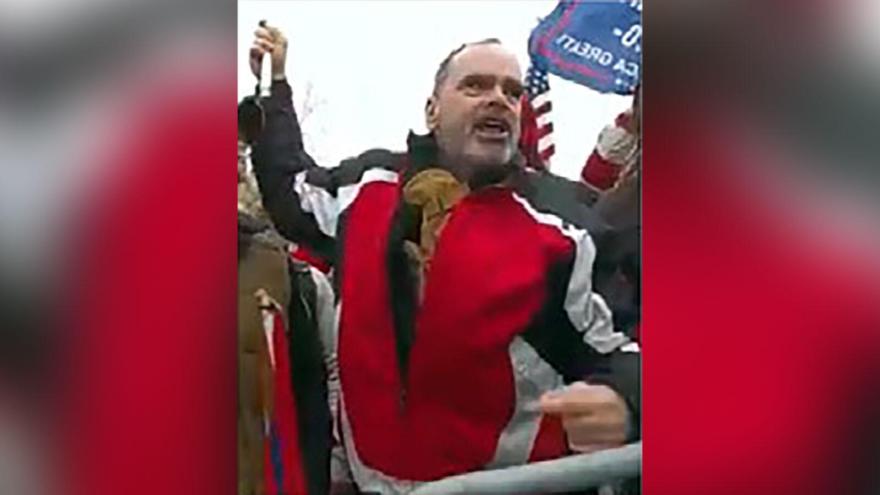 An image of Thomas Webster during the January 6th riot used in court documents by the Department of Justice.

(CNN) -- Former New York Police Department officer Thomas Webster, who unsuccessfully tried to convince a Washington, DC, jury that he was merely acting in self-defense against a police officer who he assaulted on January 6, 2021, was sentenced to 10 years in prison Thursday.

This is the longest sentence of any January 6 defendant so far.

In videos played during his trial, the 56-year-old former Marine can be seen swinging a metal flagpole at DC officer Noah Rathbun before crossing police barriers at the US Capitol and tackling Rathbun, choking him with the officer's chinstrap. In May, Webster was found guilty of all six charges he faced, five of which were felonies.

"It is not until you arrived, Mr. Webster, that all hell broke loose," Judge Amit Mehta said of the police line which Webster broke.

"I still remained shocked every time I see it," Mehta said of the video. "Nobody pushed you forward, you ran," the judge added, noting several times how the video completely contradicted Webster's own testimony of the assault.

"You constructed an alternative truth," Mehta said of Webster's testimony on the stand in May, adding that his claims of self-defense were "just not credible" and calling his testimony "utterly fanciful."

Webster, who spoke through tears before his sentence was handed down, asked Mehta for "mercy," saying that he "failed to have the courage to contain" himself that day.

"I can never look at my kids the same way again," Webster said. "The way they look at me, it's different now. ... I was their hero until January 6."

Officer Rathbun, dressed in his police uniform, attended the hearing, sitting in the back of the courtroom.

Turning to Rathbun, Webster apologized to the officer, simply saying he was sorry.

During the sentencing, prosecutors noted that Webster brought a firearm to Washington, DC, -- which he left behind on January 6 -- and wore his police-issued body armor to the Capitol.

Webster's attorney, James Monroe, wrote in a court filing that Webster's actions -- which he previously argued were in self-defense and justified -- were now "unmistakably violent and reprehensible," calling them, "unspeakable" acts.

Monroe told judge Mehta that Webster should be sentenced to time served for what he called "seconds of stupidity."