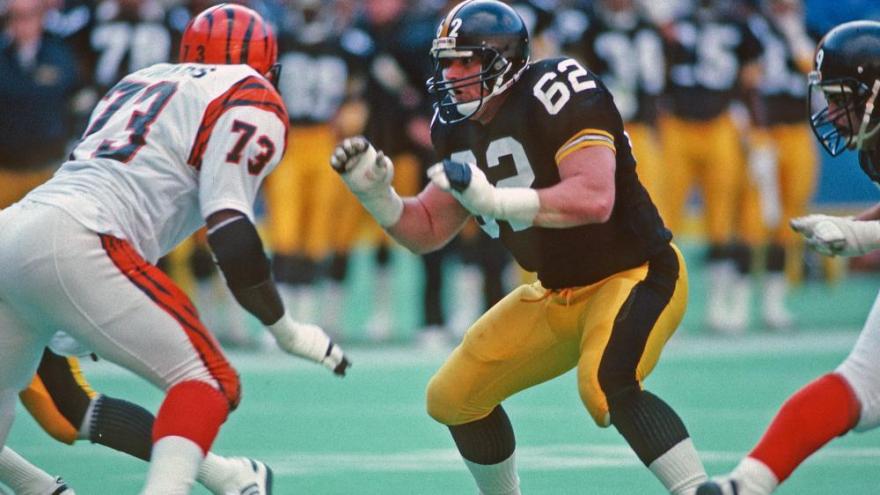 (CNN) -- Former Pittsburgh Steelers lineman Tunch Ilkin has died, according to a statement from Steelers President Art Rooney II. He was 63.

"His passion for the game of football was evident in his everyday life," Rooney said. "As a player, he fought his way through tough times of being cut and injured but continued to make an impact as a leader of our offensive line and made two Pro Bowls."

Born in Istanbul before emigrating two years later to the United States with his parents, Ilkin became the first person born in Turkey to play in the NFL, according to a statement from the Steelers.

He played for the team for 13 years and then one season with the Green Bay Packers in 1993, according to the statement. Between 1989 and 1994, Ilkin served as vice president of the NFL Players Association.

"Voted to the Pittsburgh Steelers All-Time Team in 2007 as part of the franchise's 75th Season celebration, and to the Steelers Hall of Honor as part of the Class of 2021, Mr. Ilkin loved football and played it with distinction starting in high school, then in college, and then as a professional," the statement said.

Ilkin was for decades involved with charitable work, was a devout Christian and served as a pastor in a non-denominational church since 2005, the team's statement said.

He went on to become a sports reporter on Pittsburgh broadacasts and in 1998 was added to the Steelers radio team.

Ilkin was diagnosed with Lou Gehrig's disease in September 2020. In June 2021, he announced his retirement from broadcasting to focus on treatment, the team said.

"I have had 37 years in the NFL, with 14 as a player and the last 23 in broadcasting as the color analyst on the Pittsburgh Steelers Football Network, and I've decided to retire," he had said back then, according to the team's statement. "I want to spend this time focusing on my treatment and fighting this disease."

The disease, also known as amyotrophic lateral sclerosis -- or more commonly ALS -- is a progressive, neurodegenerative disease that affects the nerve cells in the brain and spinal cord that make the muscles of both the upper and lower body work. Those nerve cells lose their ability to initiate and control muscle movement, which leads to paralysis and death.

People with the condition lose control of muscle movement, eventually losing their ability to eat, speak, walk and, ultimately, breathe.

ALS is called Lou Gehrig's disease after the famous baseball player who retired in 1939 because of the condition. Famed physicist Stephen Hawking also suffered from the disease.

"After his playing career, Tunch continued to make an impact in our community in so many ways," Rooney said. "His efforts and dedication to to the Light of Life (Rescue Mission) was unparalleled, and his desire to always help others made everyone appreciate him."