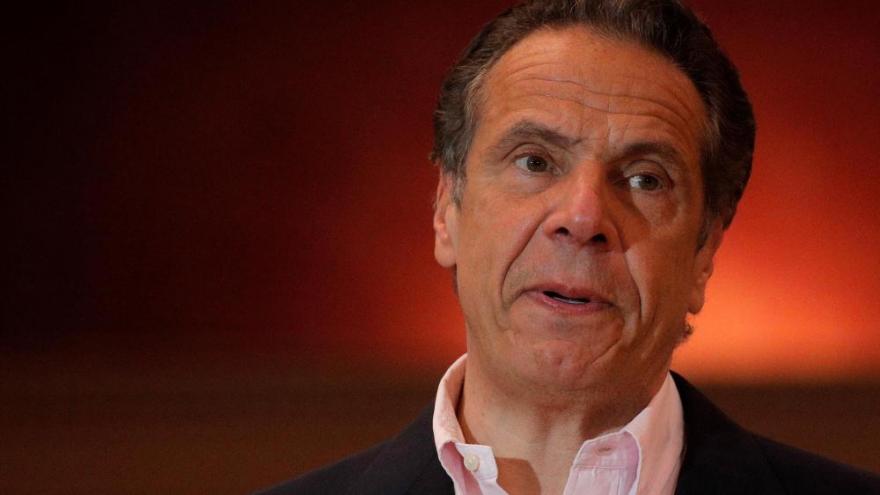 Cuomo, 64, faced impeachment and removal from office when he stepped down in August 2021, following a series of allegations of sexual harassment, which were detailed in a report by the state attorney general.

(CNN) -- Former New York Gov. Andrew Cuomo is seriously considering a political comeback as early as this year, two sources close to his inner circle told CNN, adding to a series of recent reports hinting at the Democrat's desire to resurrect his career after resigning in disgrace last summer.

Cuomo, 64, faced impeachment and removal from office when he stepped down in August 2021, following a series of allegations of sexual harassment, which were detailed in a report by the state attorney general, and growing criticism over his handling of the pandemic, including his administration's release of misleading information about the death toll in nursing homes.

One source with ties to members of Cuomo's political operation said the former governor's close allies have called to solicit opinions about his prospects should he decide to challenge New York Attorney General Letitia James in a Democratic primary this year.

With more than $16 million in campaign funds to his name and the decisions by local prosecutors not to pursue charges against him in connection to the harassment allegations, Cuomo has been emboldened and sources now say the former governor is eying a return to the political arena.

James oversaw a months-long investigation, sanctioned by Cuomo, that found he sexually harassed 11 women. Cuomo vigorously contested its findings and his lawyer has held a series of briefings in recent months accusing James of conducting a biased probe. James has fiercely denied those claims and accused Cuomo of trying to distract from the findings of her report. She is running for re-election as attorney general after abandoning a brief gubernatorial campaign.

Another New York political strategist familiar with the Cuomo team's thinking confirmed that there have been discussions around a potential "comeback" and that recent reports speculating about his next move were not a "trial balloon."

There is no timeline currently in place and the specifics of how he might reemerge after months out of the spotlight are still unclear, the source said, adding that individuals close to the former governor have been "cagier" about the particular path forward than his desire to reenter the fray. A run for attorney general has been at the center of most conversations about his political future, the source added, but a more modest step, like seeking the state Democratic Party chair, has also been discussed.

In a statement to CNN, Cuomo spokesman Rich Azzopardi said the former governor is "laser focused" on getting the "truth" about James' report and, once again, accused the attorney general of ignoring or suppressing "testimony favorable to the governor" in furtherance of her own "political ambitions."

A spokesperson for James' office dismissed Azzopardi's claims as a smear in line with past attempts by Cuomo's team to shift the focus away from the damning details in the report.

"No one, including Andrew Cuomo, can dispute the fact that multiple investigations found allegations of sexual harassment against him to be credible. Only he is to blame for inappropriately touching his own staff and then quitting so he didn't have to face impeachment," James' spokesperson said. "His baseless attacks won't change the reality -- Andrew Cuomo is a serial sexual harasser."

Azzopardi was dismissive when asked about rumors that the former governor might run again for attorney general, the position Cuomo held before first being elected governor in 2010.

"Ha! If that's true then I'm running for Governor myself!" Azzopardi said. "Listen, there are a lot of silly rumors running around this town and we can't help it if some people are still fixated on us."

But Cuomo and his team have hardly sought to avoid the spotlight. Instead, they have actively pursued it.

Though Cuomo has been mostly mum, lawyer Rita Glavin has emerged as the public face of his campaign to discredit the James report and a number of the accusers who testified about his behavior -- holding a series of long presentations and question-and-answer sessions with reporters -- as part of a broader effort to change the narrative around his resignation.

And as the rumor mill churned last week, Cuomo also sat down for dinner with New York Mayor Eric Adams, who has not revealed details from their discussion except to say that he sought Cuomo's advice on "governance, not politics," with the state budgetary process looming.

Then, in an interview with Bloomberg published Monday morning, the former governor said he regretted leaving office and claimed that he has been "vindicated" in the subsequent months.

"I never resigned because I said I did something wrong," Cuomo said. "I said, I'm resigning because I don't want to be a distraction."

Cuomo, who has also claimed he would have survived impeachment by state lawmakers, was facing near certain removal from office. Democrats in the state Assembly and Senate, which would have conducted a trial and vote to remove, were poised to act before he shocked the state by announcing plans to resign in early August.

The impeachment process was halted by Assembly leaders after his departure -- a decision that could loom large now, because his potential conviction and removal from office would have barred Cuomo from running again, limiting his options and severely diminishing his political capital.

Instead, Cuomo has maintained his operation, albeit slimmed down from his years as governor and iron-fisted state party leader. According to his most recent financial disclosure, Cuomo has spent more than $2 million since July 2021, the vast majority of it in attorneys' fees following his resignation.

Glavin alone has received nearly $900,000 over that period. His political team, including Azzopardi's firm, has been paid more than $90,000.