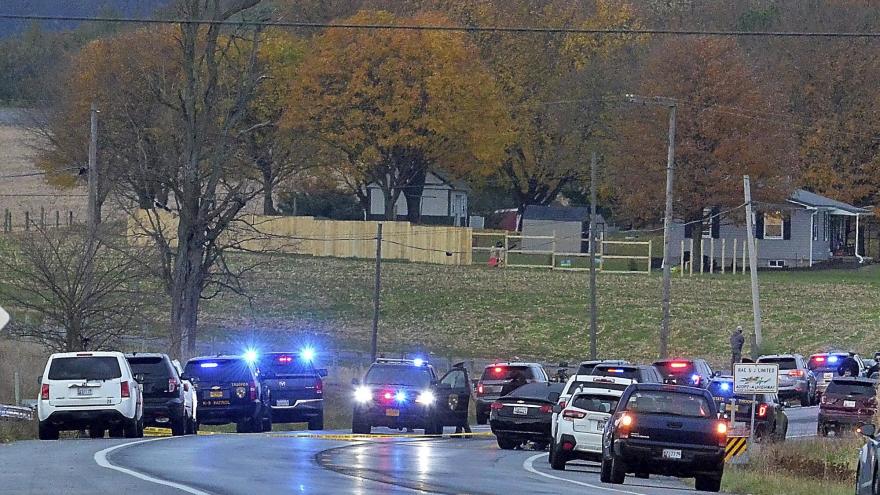 Authorities work at the scene where four people were found dead in a vehicle -- in what police say was a murder-suicide incident -- on Thursday outside Ringgold, Maryland.

(CNN) -- A former Baltimore County police officer and two children believed to be his daughters he allegedly kidnapped are dead -- along with a suspended police sergeant allegedly on the run with him -- in an apparent "murder and suicide," Maryland State Police said Thursday.

Former officer Robert Vicosa, 41; suspended Baltimore County police Sgt. Tia Bynum, 35; and children believed to be Vicosa's 6- and 7-year-old daughters were found shot in a vehicle in western Maryland near the Pennsylvania state line, shortly after police tried to pull them over, authorities said.

Vicosa was accused of abducting his daughters at gunpoint Monday from the home of his estranged wife in Pennsylvania's Windsor Township, as well as assaulting the wife and stealing her vehicle, police in that state had said.

On Thursday afternoon, Pennsylvania State Police spotted a vehicle wanted in the case in southern Pennsylvania near Waynesboro, heading to the Maryland state line, and tried to stop it, authorities said.

A California couple vanished after stealing millions in Covid-19 relief funds. They left a goodbye note for their three kids

Shortly after the attempted traffic stop, and after the vehicle crossed into Maryland, the vehicle veered off the road and struck a fence line, Maryland State Police spokesperson Elena Russo said.

Officers surrounded the vehicle and tried to communicate with the occupants, but couldn't see inside because of "window tinting and interior fogging," Maryland State Police said in a news release.

After getting no response, officers broke open a passenger-side window and found Bynum in the driver's seat and Vicosa and two girls in the back seat, all of whom appeared to have been shot, police said.

Vicosa, Bynum and one girl were pronounced dead there. The other girl was flown to a hospital for treatment, but was later pronounced dead, Russo said.

Police did not say who is believed to have killed whom.

An assault rifle and other firearms were found in the vehicle, Maryland State Police said in the release.

The alleged abduction at gunpoint

On Monday afternoon, police responded to a home-invasion robbery in southern Pennsylvania's Windsor Township, where Vicosa allegedly assaulted his estranged wife, took their two daughters at gunpoint, stole her vehicle and fled the area, police said at a news conference Wednesday.

Vicosa's estranged wife told police he had broken into the home, held her captive for more than 24 hours, had firearms and used drugs at the home. Police found corroborating evidence of the assault, break-in and drug activity at the scene, but didn't find the two daughters, York Area Regional Police Lt. Ken Schollenberger said.

Police pinged Vicosa's phone, which led them to the southern Pennsylvania home of Tia Bynum, a "close friend" of Vicosa, according to police. Bynum "was less than forthcoming" and didn't allow them to search her home, Schollenberger said.

Bynum's home is in the Pennsylvania city of York, according to Baltimore County police. York is a roughly 50-mile drive north of Baltimore.

Vicosa had abandoned his estranged wife's car and had taken an Acura that allegedly belonged to Bynum, according to Schollenberger. Police believe that the Acura turned into a waterway while he was driving it, forcing him and the girls to abandon the car.

Police received a call on Tuesday from a woman who said she was held hostage by a male at gunpoint, according to Schollenberger. The woman reported to police that she went on a walk on her property, found the car overturned in the canal, and then discovered Vicosa in her camper. Vicosa then stole her car and phone, police said.

Police pinged the stolen phone, which again led them to Bynum's home, they said. When they searched the home, police didn't find Bynum, Vicosa or the children. Another one of Bynum's cars were also missing, police said.

Vicosa and Bynum's history at the Baltimore County Police Department

Vicosa was employed by the Baltimore County Police Department from 2004 until he was terminated in August of 2021, BCPD spokeswoman Joy Stewart said.

According to a report shared with CNN by the BCPD, Vicosa was demoted from sergeant to officer and eventually terminated after being investigated over four allegations, including three where he was allegedly inappropriate with female officers by viewing inappropriate videos in their presence and making remarks of a sexual nature.

Bynum was recently suspended from her role as sergeant at the BCPD due to her being accused of being on the run with Vicosa, Stewart told CNN.