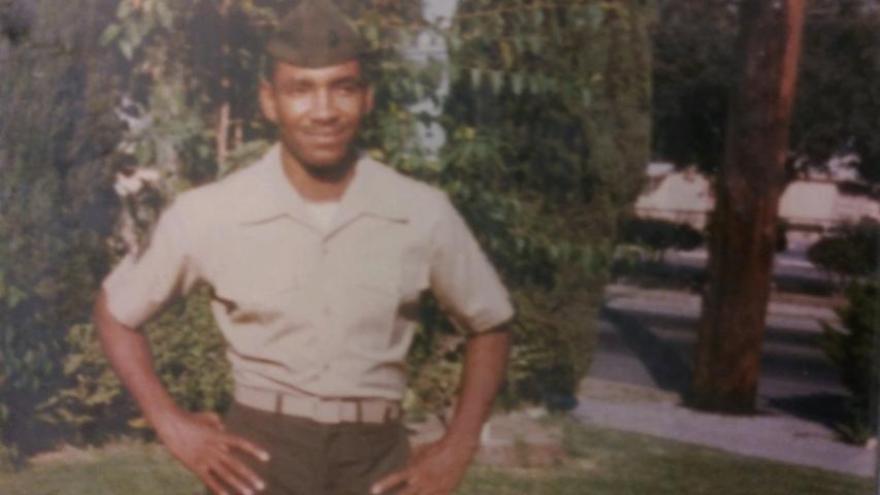 Robert Johnson, 58, is a former Marine. He said he feels it's his duty to lift the spirits of the people around him and to remind these frontline workers of the difference they are making.

"Sometimes we have up to, like, 10 to sometimes 18 nurses walk out and we just kind of wait for each other," said Kelly Wilson, a registered nurse who works in the neonatal intensive care unit at Kaiser Permanente Downey. "It's like a cheer squad."

But the "cheer squad" wouldn't exist without its unofficial leader, the person who greets them outside every day after their shift: Security officer Robert Johnson.

For the nurses, Johnson, a 58-year-old former Marine, is the human embodiment of a pep rally, greeting them with enthusiasm and positivity after a long night of treating people in the fight for their lives against a relentless virus.

"We have a lot of things thrown at us all the time where we work on high stress levels all the time," Wilson said, acknowledging that some days are harder than others. "Maybe some people feel defeated leaving work, and he (Johnson) just gives that extra energy to be positive."

Johnson said he feels it's his duty to lift the spirits of the people around him and to remind these frontline workers of the difference they are making.

"These are individuals who are taking time away from their life, coming here, putting a majority of their time to work here," he said. "And I show a lot of appreciation for that. That's why I try to bring out a smile. Look what you have done!"

Nurses can't wait to see him

When the pandemic hit Southern California, the hospital adjusted its protocols and brought in Johnson to work security overnight.

The cheering ritual began when Johnson decided to change up the standard Covid-19 screening question he asks nurses before they enter the hospital. He tried it on one nurse first.

"I said, 'Are you feeling great today?' And the first nurse said, 'no,'" Johnson said."She realized what I said 'cause she was expecting something else. She said, 'yeah!'"

Then, after seeing that nurse smile brightly, Johnson started asking everyone that same question.

"I think it was a month into it, it was being consistent, and we were having conversations about it in our unit," Wilson said. "The co-workers were like, 'Oh, man! I can't wait to get off work and see that guy!' One of the nurses described him. She was like, 'He's my cup of coffee on my ride home for work.'"

Now, Johnson describes his interactions with the nurses as a "party."

"I'm telling you right now, when they come out, you'd think we're throwing a party. It's a celebration!" Johnson said. "Another nurse may give me a bump this way and I'll bump that way. One doctor did a little dance and the bump. Everyone is coming out with a different way of greeting."

"If I look back into my life, I cannot name one day that I've been depressed. Not one. I've always had a positive attitude," Johnson said. "The Marine Corps taught me that there are no problems in life. You only have challenges that you will overcome."

He keeps this positive outlook, despite not getting a lot of sleep.

He's at the hospital from midnight until 8 a.m. Then he heads to his second job working with disabled adults into the afternoon. On Fridays, after his shift at the hospital, he works at the group home until 11 p.m. Sunday night. That gives him just enough time to get back to the hospital at midnight on Mondays, where he's in place to lift the spirits of those frontline workers with his infectious energy.

"The only negative effect I could see is that I went from one gray hair to about maybe four now," Johnson said with a chuckle.

On weekdays, he heads home after work to spend some time with his wife of 36 years.

"We're still on our honeymoon," he said, smiling broadly, noting that he sleeps anywhere from two to six hours a day. "When I love what I do, I'm not working."

The nurses appreciate Johnson so much, that they awarded him with a BEE Award, an acronym for "being extraordinary every day."

"It's amazing how little sleep he gets and stays positive," Wilson said.

But Johnson believes appreciation is a two-way street.