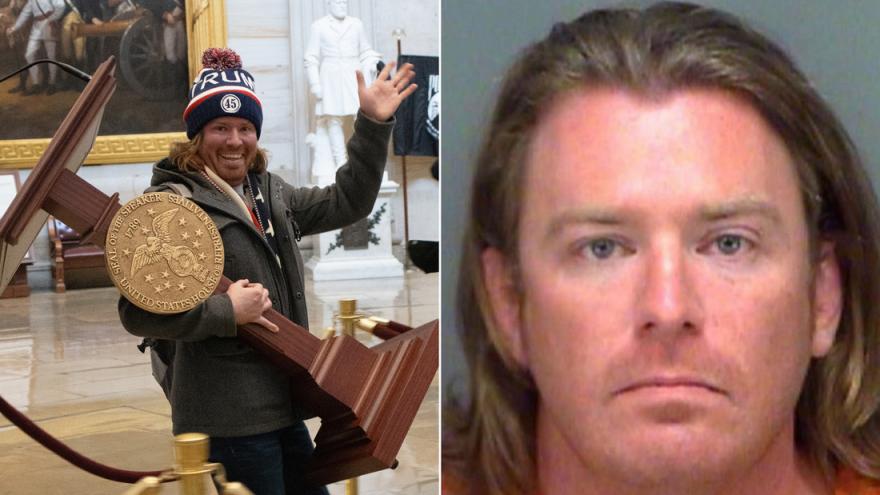 (CNN) -- A former US Marine charged with assaulting officers during the Capitol riot told FBI investigators that he got "caught up in the moment."

The charges against him include aiding and abetting, civil disorder, forcibly assaulting, resisting, opposing, impeding or interfering with any federal officer or employee and violent entry into restricted grounds or any Capitol building, according to a criminal complaint. He has not yet entered a plea.

Court filings that were unsealed Tuesday include an FBI bulletin with photos of people seen at the riot, and prosecutors said the FBI received a tip that one of the men pictured was Shively.

Shively contacted local law enforcement to "admit that he was at the US Capitol" during the insurrection and said he wanted to self-surrender, according to a court filing.

During an interview with the FBI in Pennsyvlvannia, Shively said he "got caught up in the moment," and grabbed a police officer by the jacket, according to the filing.

Prosecutors also shared a screenshot of Shively appearing to shove a Capitol Police officer -- and Assistant US Attorney Scott Ford said at a hearing Tuesday that Shively "laid his hands" on officers.

"His charges are different than the majority of the people that were down in DC. He didn't just enter the Capitol unlawfully, he actually laid hands on police officers on three separate occasions," said Ford.

Defense attorney Thomas Thornton said he doesn't believe there's evidence that Shively was in the Capitol itself, but said that he was on the grounds and was trampled by the crowd.

"Mr. Shively was a person who got a little bit carried away obviously during this situation, and was only on the grounds for a little bit over 10 minutes and then he left," Thornton said at the hearing.

Ford said the FBI contacted Shively on Tuesday to tell him that an arrest warrant had been filed, asked him to come in and bring his cell phone with him.

"(Shively) stated, 'No, not only will I not bring it, but additionally I've already deleted everything off of that cell phone,'" Ford told the hearing

Thornton told CNN on Wednesday that Shively had turned his phone over to authorities on Tuesday, that the items that were deleted from it were "videos he found on the internet," adding that Shively did not take any videos or pictures at the Capitol.

"He has cooperated fully after turning himself in," Thornton told CNN.

Prosecutors noted that Shively, described in a court filing as a former US Marine, was interviewed by CNN near the Capitol on January 6.

"I'll tell you what happened, we broke down the barriers and we rushed 'em, we charged 'em," Shively told CNN's Elle Reeve.

Reeve asked Shively what the group's end game was.

"What are we supposed to do? Supreme Court's not helping us. No one's helping us. Only us can help us. Only we can do it," Shively said in the interview.

CNN has asked prosecutors if they plan to appeal that decision.