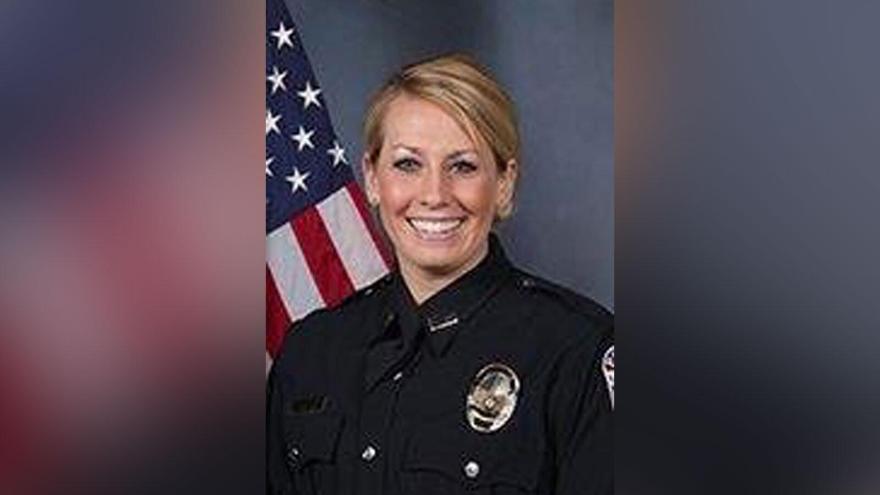 Kelly Goodlett, shown in a police department photo, pleaded guilty before US District Judge Rebecca Grady to falsifying an affidavit for the search of Taylor's apartment that resulted in the 26-year-old's death in Louisville, during a botched March 2020 raid.

(CNN) -- A former Louisville detective pleaded guilty in federal court Tuesday to conspiring to falsify an affidavit for a warrant to search Breonna Taylor's home -- which ultimately led to the woman's death -- and to cover up the false document by lying to investigators, the US Justice Department says.

Kelly Hannah Goodlett, 35, pleaded guilty before US District Judge Rebecca Grady in Kentucky. The botched March 2020 raid ended with the fatal shooting of the 26-year-old woman.

"First, Goodlett admitted that she knew that the affidavit in support of the warrant to search Taylor's home was false, misleading and stale," the DOJ said in a statement.

"Second, Goodlett admitted that she and the other detective conspired to obstruct justice by providing false information to investigators after Taylor was shot and killed."

Goodlett was charged, along with three other officers, earlier this month with submitting a false affidavit to search Taylor's home without probable cause before the Louisville Metropolitan Police Department's raid, and then creating a "false cover story in an attempt to escape responsibility for their roles in preparing the warrant affidavit that contained false information," according to court documents.

Goodlett is scheduled to be sentenced on November 22, according to court records. She could face up to five years in prison and a fine of up to $250,000.

In her plea agreement, Goodlett said she was aware that the affidavit in support of the warrant falsely claimed that the target of the warrant, Taylor's ex-boyfriend, was receiving packages from the US Postal Service at Taylor's home, according to the DOJ. She also said officers knew the suspect was not living at Taylor's home and hadn't visited for weeks, the department said.

The former officer also admitted to providing false information to investigators after Taylor's death in an effort to cover up the misleading information in the warrant, the DOJ said.

A trial for Jaynes and Meany is scheduled for October 11, 2022, court records show. Hankison's trial is set for October 13.

The charges filed earlier this month were the first federal counts against any of the officers involved in the raid. In addition to civil rights offenses, federal authorities charged the defendant with unlawful conspiracies, unconstitutional use of force and obstruction, according to Attorney General Merrick Garland.

Taylor, an emergency room technician, was shot and killed in her apartment during a flawed forced-entry raid in the early hours of March 13, 2020.

Her death, along with that of other Black people at the hands of law enforcement -- including George Floyd in Minnesota and Ahmaud Arbery in Georgia -- sparked a summer of protests calling for police reform.

State prosecutors charged only Hankison in connection with the shooting. The LMPD fired Hankison in June 2020, and in September 2020, a grand jury charged Hankison with three counts of felony wanton endangerment for blindly firing 10 shots into Taylor's home.

A jury acquitted Hankison on all charges in March.

Hankison is alleged to have "willfully used unconstitutionally excessive force ... when he fired his service weapon into Taylor's apartment through a covered window and covered glass door." He is charged federally with depriving Taylor and a guest in her home "of their constitutional rights by firing shots through a bedroom window that was covered with blinds and a blackout curtain," according to the US Department of Justice.

The 46-year-old detective also faces charges of depriving three of Taylor's neighbors of their constitutional rights as, according to the indictment, the bullets he fired traveled through a wall in Taylor's home and into an adjacent apartment.