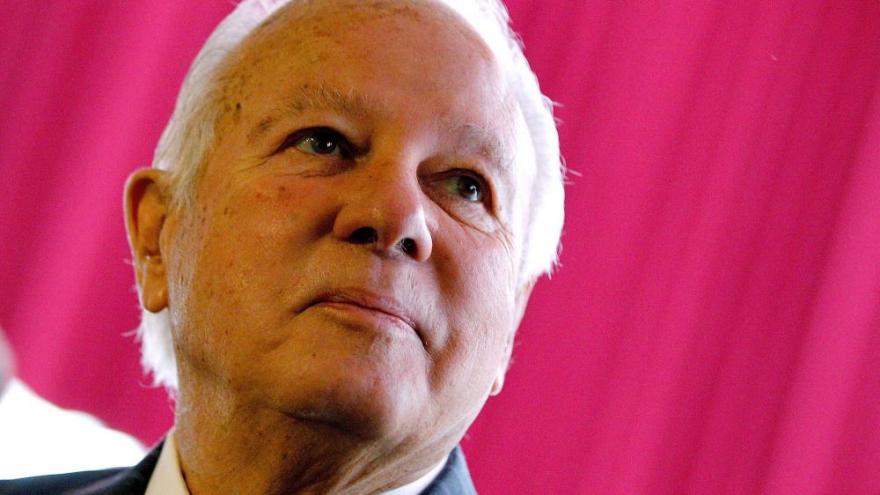 Former Louisiana Gov. Edwin Edwards died at the age of 93. He served four terms as governor.

(CNN) -- Former Louisiana Gov. Edwin Edwards, a Democrat who served four terms as governor and nearly 10 years in federal prison for extortion, conspiracy and racketeering, has died at age 93.

Edwards died peacefully Monday morning surround by his family and friends, Leo Honeycutt, a family spokesperson, told CNN in a statement. Last week, Edwards placed himself in hospice care following an examination at the hospital after complaining of "pain in his right lung," according to the statement.

"I have lived a good life, had better breaks than most, had some bad breaks, too, but that's all part of it. I tried to help as many people as I could and I hope I did that, and I hope, if I did, that they will help others, too. I love Louisiana and I always will," Edwards said, according to the release.

Trina Scott Edwards remembered her late husband as being "optimistic all the time."

"Nothing bothered him except bothering other people. It's heartbreaking for me because I know he so wanted to make Eli's 8th birthday party August 1," she said in a statement released Monday, referencing the couple's son.

Born August 7, 1927 in Marksville, Louisiana, Edwards served two consecutive terms as governor from 1972 to 1980. He was elected to a third term in 1983 and a final term in 1991, when he beat Ku Klux Klansman David Duke. A former US Navy aviation cadet and lawyer, he began his career as a city councilman and state representative before being elected to Congress, and then governor.

In 2001, Edwards was sentenced to 10 years in prison and fined $250,000 for extorting payoffs from people who had applied for riverboat casino licenses. He requested a pardon from then-President George W. Bush but never got one and was released from prison in 2011.

In an effort to make a political comeback in 2014, he announced a bid for Louisiana's 6th Congressional District but lost to Republican Garret Graves in a runoff election.

After leaving federal prison in 2011, Edwards married his third wife, Trina, who is roughly 50 years his junior. They starred in a short-lived reality TV show "The Governor's Wife" on A&E, chronicling Edwards' post-prison life.

In an interview with CNN in 2014, Edwards and his wife spoke about his run for Congress. The former governor said he never took money from taxpayers.

"In all this claptrap about how crooked I am and what I stole, nobody's ever charged me, or accused me, of taking money from the taxpayers," he told CNN. "It had nothin' to do with my career as a public official. Nothin'."

His relationship with Trina began as ?pen pals while he was in prison, which led to love at first sight when she visited him. "I was expecting him to be angry or bitter, and he just wasn't," she told CNN back then.

And while Edwards was looking forward to re-entering politics, his wife told CNN she did not particularly want him to run.

"I would naturally support him in whatever he chose to do," Trina Edwards said then. "But it's not really my thing."

Louisiana Gov. John Bel Edwards on Monday called Edwards as "a larger than life figure known for his wit and charm," adding that but he will be remembered as "a compassionate leader who cared for the plight of all Louisianans."

"Our state has lost a giant, and we will miss him dearly. Donna and I send our deepest condolences to his wife, Trina, family and all who were blessed to call him a friend and ask everyone to join us in praying for God to comfort them during this difficult time," the Democrat said in a statement.