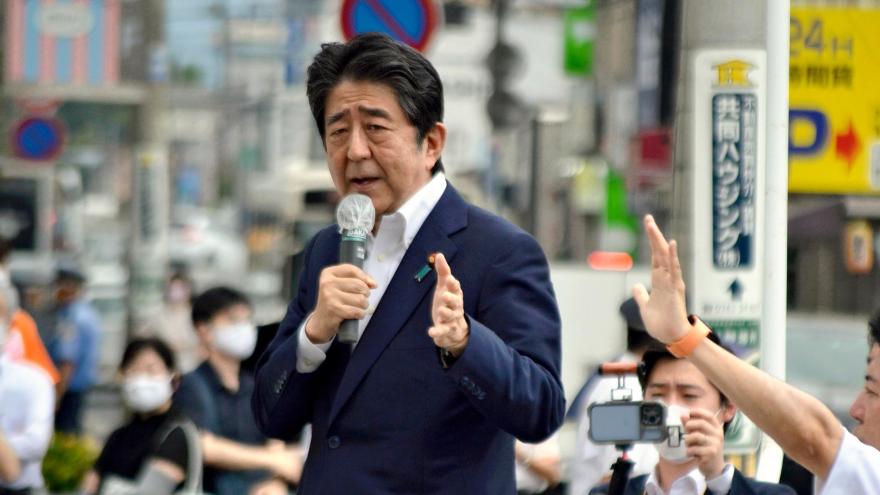 (CNN) -- Former Japanese Prime Minister Shinzo Abe died on Friday after being shot while giving a campaign speech on a street in central Japan, according to public broadcaster NHK.

The assassination of the former world leader in broad daylight has shocked a nation not used to gun violence and prompted an outpouring of support and condolences from the international community.

Abe died from excessive bleeding and was pronounced dead at 5:03 p.m. local time, doctors at the Nara Medical University hospital said during a press conference on Friday. The doctors said the bullet that killed the former Japanese leader was "deep enough to reach his heart" and a team of 20 medical professionals were unable to stop the bleeding.

Abe went into cardiopulmonary arrest at the site of the shooting and was rushed to hospital in a state of cardiac arrest at 12:20 p.m. local time, doctors said. During surgery, doctors discovered a bullet wound to his neck and a large wound on his heart.

Abe, 67, was the former Liberal Democratic Party leader and Japan's longest-serving prime minister, holding office from 2006 to 2007 and again from 2012 to 2020, before resigning due to health reasons. Since stepping down, he remained in the public eye and regularly appeared in the media to discuss current affairs.

At the time of the shooting, Abe was delivering a speech in support of LDP candidates in Nara city ahead of the upcoming Upper House elections scheduled for Sunday.

Video aired by the public broadcaster captured the moments before the shooting, showing Abe speaking to a small crowd in front of Yamatosaidaiji railway station. In subsequent videos, two shots can be heard and smoke can be seen in the air.

Photos of the scene show people gathered around the former leader as he lay in the street, with what appeared to be blood stains on his white shirt.

He was rushed to hospital via helicopter, where medics began frantic efforts to keep him alive. He was believed to have been shot twice, in the chest and neck, NHK reported, citing police.

An official from the Nara City Fire Department told CNN earlier on Friday that Abe was in a state of cardiopulmonary arrest, a term used to describe the sudden loss of heart function and breathing.

A suspect, identified as Tetsuya Yamagami, a local man in his 40s, was arrested and charged with attempted murder, according to NHK. It appears the suspect used a homemade weapon in the attack, though the motive remains unclear. On Friday he was held for questioning at Nara Nishi police station, NHK reported.

Japanese Prime Minister Fumio Kishida paid his "deepest condolences" to former leader Abe, saying he "was a personal friend, with whom (he) spent a lot of time."

Kishida said he had a "great respect for the legacy (Abe) left behind" and would continue election campaigning on Saturday, adding that a free and fair election must be defended at all costs.

"I mourn with his family, his friends and all the people of Japan. This brutal and cowardly murder of Shinzo Abe shocks the whole world," she said.

Abe's assassination has shocked Japan, which has one of the lowest rates of gun crime in the world due to its extremely strict gun control laws.

In 2018, Japan reported nine deaths from firearms, compared with 39,740 that year in the United States.

Under Japan's firearms laws, the only guns permitted for sale are shotguns and air rifles -- handguns are outlawed. But getting them is a long and complicated process.

"It's not only rare, but it's really culturally unfathomable," Snow said. "The Japanese people can't imagine having a gun culture like we have in the United States. This is a speechless moment. I really feel at a loss for words. I pray for the best for the former prime minister."