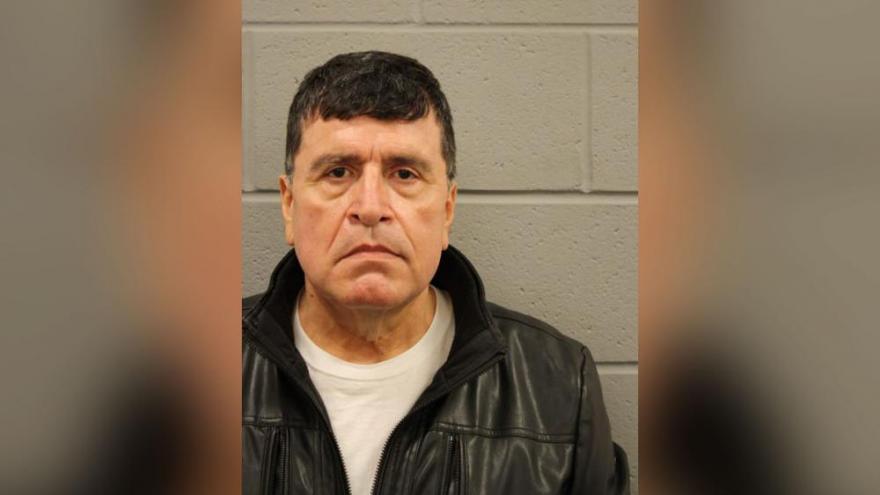 A former police captain who was part of a private citizens group investigating still unsubstantiated 2020 election fraud claims was charged Tuesday with running a man off the road and pointing a gun to his head two weeks before the election, the Harris County district attorney said in a statement.

(CNN) -- A former Houston police captain was charged Tuesday with running a man off the road and pointing a gun to his head two weeks before the election as part of a baseless voter fraud conspiracy theory, the Harris County district attorney said in a statement.

On October 16, Aguirre asked a lieutenant with the Texas Attorney General's Office to conduct a traffic stop to help with his investigation, according to a Houston police affidavit obtained by CNN. When the idea was rejected, Aguirre said he would do it himself and "make a citizen's arrest," the affidavit says.

Three days later, Aguirre allegedly ran his SUV into the back of a man's truck, and when the man got out, Aguirre pointed a gun at him, forced him to the ground and put his knee on the man's back -- an image captured by police body camera when officers arrived, according to prosecutors.

Aguirre told authorities he had conducted surveillance on the man for four days, according to the district attorney's news release. Aguirre said he suspected there were 750,000 fraudulent ballots inside the truck and that the man was "the mastermind of a giant (voter) fraud," the release states.

CNN affiliate KPRC spoke with Lopez-Zuniga, who says he tried to assist Aguirre after they pulled off the side of the road following the initial collision.

"He said, 'Help me, help me' with a hand inside his coat," Lopez-Zuniga said in an interview. "Then when I tried to help him, he pulls out a gun."

KPRC reports Lopez-Zuniga felt he was about to be killed.

"Very, very close, because when I saw him unlock the safety I thought, 'He is going to shoot me,'" Lopez-Zuniga said.

After an investigation, Houston police said they found the allegations of election fraud "unfounded" and referred the case to the district attorney's office.

Aguirre was arrested Tuesday and is charged with aggravated assault with a deadly weapon, a second-degree felony punishable by up to 20 years in prison, prosecutors said. He posted $30,000 bond on Tuesday afternoon and is out of jail, according to Harris County court records.

'He crossed the line'

The incident is one of the most serious consequences of the conspiracy theories around systemic voter fraud, which have been repeatedly debunked. President Donald Trump has continued to claim that widespread voter fraud occurred during the election, but election officials have rejected the claim and his team of attorneys have produced no evidence in court to support it.

"He crossed the line from dirty politics to commission of a violent crime and we are lucky no one was killed," Harris County District Attorney Kim Ogg said in a statement. "His alleged investigation was backward from the start -- first alleging a crime had occurred and then trying to prove it happened."

"He was working and investigating voter fraud, there was an accident," Yates said. "A member of the car got out and rushed toward him and that's where the confrontation took place. It's very different than what you're citing in the affidavit."

Prosecutors say Aguirre was paid more than $260,000 by a private group called "Liberty Center for God and Country" to investigate alleged ballot schemes in the Houston area. He received about $211,400 the day following the incident.

Jared Woodfill, the center's president, told CNN the group and Republican activist Steve Hotze hired a private firm that included "Aguirre, a former FBI investigator and about 20 investigators that investigated reports of voter fraud," reports that were sent to Hotze.

The Republican activist was also one of the plaintiffs who filed a petition prior to Election Day seeking to invalidate 127,000 ballots cast in drive-thru early voting. A federal judge rejected that request.

According to the Houston police affidavit, Aguirre told police at the scene he was "investigating a voter fraud ballot harvesting conspiracy" that he claimed the victim, identified in the affidavit as DL, was operating out of his home. Aguirre said that DL had approximately 750,000 fraudulent mail ballots and accused him of "using Hispanic children to sign the ballots" because their fingerprints wouldn't be in any databases.

CNN has reached out to Lopez-Zuniga but has not been able to speak with him.

According to DL's statement to police, while he was on the ground being held by Aguirre, two other cars pulled up and Aguirre instructed one of those drivers to search DL's truck. After telling Aguirre that the truck was clear, DL's truck was driven away from the scene. Police found his truck abandoned a short time later a few blocks away, the affidavit states.

Aguirre told the police at the scene that he had been surveilling DL's home for four days. Police searched DL's home with his permission, the affidavit states, and did not find any evidence of voter fraud or ballot harvesting.

Aguirre also told the officers at the scene that they "can be a hero or part of the problem," the affidavit states.

"I just hope you are a patriot," Aguirre told police according the affidavit.