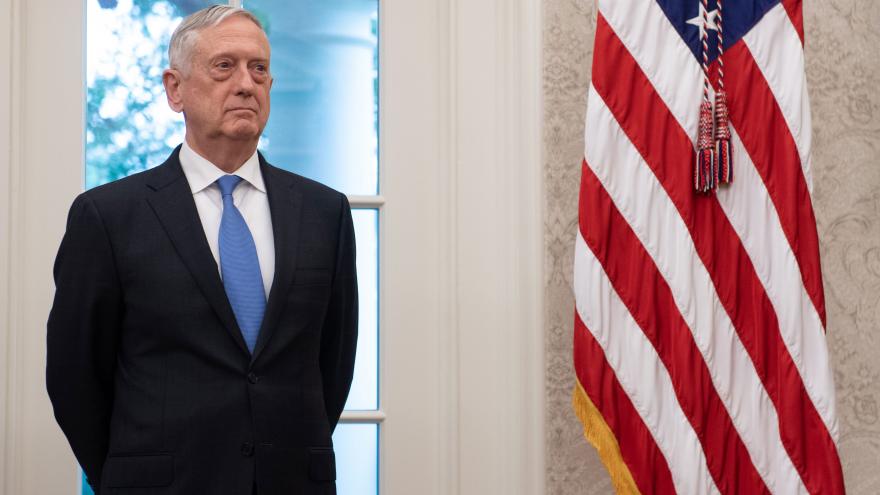 (CNN) -- James Mattis, the former US Secretary of Defense and onetime Theranos board member, recounted how he lost confidence in the failed blood-testing startup during his testimony Wednesday in the criminal trial of the company's founder and former CEO Elizabeth Holmes.

Mattis, in a San Jose federal courtroom over the course of nearly four hours, described believing so much in the promise of the company's mission to test for a range of conditions with just a few drops of blood that he invested $85,000 in the startup. But he testified that at a certain point, following growing scrutiny of the company's testing capabilities, "I didn't know what to believe about Theranos anymore."

"I couldn't see why we were being surprised by such fundamental issues," Mattis said during questioning by federal prosecutor John Bostic.

Holmes, who founded Theranos in 2003 at age 19 in pursuit of revolutionizing blood testing,surrounded herself with a remarkable roster of high-profile men during her tenure as CEO, including media mogul Rupert Murdoch, once reportedly the company's largest investor; David Boies, the prominent attorney who was an investor, board member and legal defense for Holmes and Theranos for a time; as well as former Secretary of State Henry Kissinger. All have been listed as witnesses the government may call.

Mattis, who served on the board of the blood-testing startup from 2013 to 2016, is the first of her well-known associates and the seventh overall witness to testify. Mattis, during the cross examination, testified that he personally helped Holmes with security by recommending his former chief bodyguard in response to security concerns about her growing public profile raised by another powerful Holmes ally, former Secretary of State George Shultz.

In his early interactions with Holmes, Mattis sometimes referred to her as "young Elizabeth," according to emails displayed in the courtroom. In his testimony, he said she struck him as "sharp, articulate, committed." He acknowledged that he was impressed by her but "that didn't take the place for having the device prove itself."

Mattis testified that he was mainly interested in the device for military application because of his belief that a single, relatively small device could perform all the tests the company claimed it could. "I would not have been interested in it were it not," he said. Mattis also said he joined the board because he found Holmes' mission to be "breathtaking" and "a very worthy project," if it reduced the cost of healthcare.

During the cross examination of Mattis, Holmes was sitting still in the courtroom with a blue mask covering her face, blinking frequently.

Mattis' testimony comes as the government continues to mount its case against Holmes in an effort to convince jurors that she intended to mislead investors, patients, and doctors about the capabilities of her company and its proprietary blood testing technology in order to take their money.

Holmes faces a dozen counts of federal fraud and conspiracy charges, and up to 20 years in prison. She has pleaded not guilty.

The defense, for its part, has argued that Holmes was a young, ambitious CEO whose company failed but that failure is not a crime.

Once hailed as the next Steve Jobs, Holmes catapulted her startup to a $9 billion valuation on the promise that its technology could efficiently test for conditions like cancer and diabetes with just a few drops of blood taken by finger stick. Lending star power to her company was a board stacked with military and intelligence professionals.

Holmes secured key retail partners such as Walgreens and Safeway, and was lauded on magazine covers as the richest self-made woman. Then things came crashing down after a Wall Street Journal investigation into Theranos' technology and testing methods prompted broader scrutiny.

Putting his reputation on the line

Mattis, a four star general,first met Holmes in 2011 at a Marine Memorial event before he retired from Marine Corpsin 2013. At a subsequent event where Mattis was giving a speech in San Francisco, Holmes pricked his finger backstage. "I believe that's when I first saw the machine, a box-like device sitting on a bench right there, and [she] explained about the speed and what it could do," he testified. He eventually threw his weight behind the startup's attempt to get its technology used on battlefields.

Under cross examination by Holmes' defense attorney, Kevin Downey, about his knowledge that Theranos' technology could only run a limited number of tests when he joined the board, Mattis indicated he thought it was further along. He indicated he believed that it could be deployed in the field and run "more than a handful of tests." He noted that otherwise it "would have been useless to us."

During subsequent redirect questioning by Bostic, Mattis stressed his desire to have the Theranos devices tested in the field as part of a side-by-side comparison project to see if they performed before he joined the company's board.

"What I wanted to do is before I put my reputation on the line... I wanted to know it worked," Mattis said. "I needed to have the data, and the best way to do it is to put [the technology] alongside what we were doing and have it stand and deliver faster and more accurate results."

Mattis said that did not happen before he retired from the military and then joined the board of Theranos at the invitation of Holmes. He said he did ask Holmes why he was being picked for the board. "I was not a medical person." He said he was told he could help with "how to build elite teams, how to get commitment out of people."

Mattis testified that he was under the impression Theranos had 2,000 tests available, which he believed were tests performed on Theranos' proprietary blood analyzers but he later learned the company was largely using machines from other companies.

Slides from an 89-page PowerPoint presentation from a board meeting -- Mattis' first as a member of the board -- were shown in the courtroom. One slide, titled "Validation of Theranos," claimed its lab infrastructure had been validated under FDA and the World Health Organization Guidelines, for example, and included a quote from John Hopkins Medicine that its technology "is novel and sound."

"So, it wasn't just Elizabeth talking about it. It was third parties, respected third parties," he said, later noting that he took Holmes' claims about the technology's efficacy at face value.

"We were in the room with her, but I took as good faith that what we were being told was accurate, and I assumed that when we say these are the Theranos results, it was from the Theranos machine," he said. "Looking back, that probably was not accurate."

According to the indictment, Holmes and chief operating officer Ramesh "Sunny" Balwani, who faces a separate trial on the same charges and has also pleaded not guilty, allegedly represented to investors that Theranos had a profitable and revenue-generating business relationship with the United States Department of Defense and that its technology had been deployed to the battlefield. "In truth, Theranos had limited revenue from military contracts and its technology was not deployed in the battlefield," the indictment stated.

Mattis resigned from the board of Theranos in 2016, before joining former President Donald Trump's cabinet. "Secretary Mattis was struck by the promise of technology and was looking for any technology solution to save lives on the battlefield," Pentagon spokesperson Dave Eastburn told CNN Business in 2018. "He resigned his position on the Theranos board on Dec. 16th prior to his confirmation."

The trial, which kicked off two weeks ago with opening statements, is set to resume Friday.