Dayton shooter had an obsession with violence and mass shootings, police say 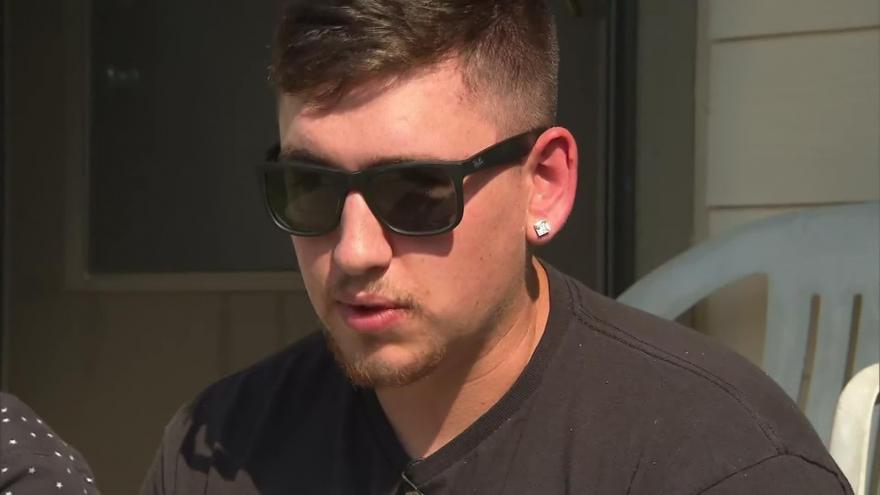 Spencer Brickler said a counselor at Bellbrook High School told him that he and his sister were on Connor Betts' hit list. Brickler said he was riding on a school bus when he saw Betts getting escorted off by officers who were investigating the threats.

(CNN) -- The gunman who opened fire in Dayton, Ohio, this weekend had an obsession with violence and mass shootings and had expressed a desire to commit a mass shooting, Dayton Police Chief Richard Biehl said Tuesday.

Unlike the El Paso shooting, which the alleged gunman appears to have described as part of an anti-immigrant crusade, authorities still do not know what motivated Connor Betts to open fire early Sunday morning in a popular nightlife district in Dayton.

But comments from authorities, memories from former classmates and posts on his apparent Twitter account show that the gunman took a deep interest in violence -- and, as in many American shootings, had easy access to powerful firearms.

Armed with a .223-caliber high-capacity rifle with 100-round drum magazines, Betts fired 41 shots in less than 30 seconds, killing his sister as well as eight seemingly random bystanders in the area, police said Monday. He was killed by police officers on patrol 30 seconds after he opened fire.

In a statement, the Betts family said they were "shocked and devastated" by what happened. They are cooperating with law enforcement and asked for privacy while they mourn the loss of their daughter and son.

Former high school classmates said that he had a "hit list" of people he wanted to kill or rape. He was in a "pornogrind" band with extremely graphic, violent lyrics. And authorities searching his family home found writings that expressed an interest in killing people, two law enforcement sources told CNN.

But the writings did not indicate any racial or political motive, sources said.

In addition, a Twitter account that appears to belong to Betts retweeted extreme left-wing and anti-police posts, as well as tweets supporting Antifa, or anti-fascist, protesters.

The most recent tweet on the @iamthespookster account was on August 3, the day of the shooting, when he retweeted a post saying, "Millenials have a message for the Joe Biden generation: hurry up and die."

A friend of Betts and his sister said Betts was comfortable around guns and would teach people how to shoot safely.

"He enjoyed shooting," the friend told CNN. "He seemed to have an interest in guns, how do they work, that sort of thing."

Another person, who asked not to be named for privacy reasons, said some of the names on the hit list were female students who, like her, turned him down for dates.

She said Betts often simulated shooting other students and threatened to kill himself and others on several occasions.

"He loved to look at you and pretend to shoot with guns, guns with his hands," she said.

Bellbrook Police said Betts had been arrested for operating a vehicle under the influence of alcohol in 2016.

In the hours before the Dayton shooting, the Twitter account "liked" several tweets about a shooting in El Paso that left 22 dead, including one supporting gun control and others that called the El Paso shooting suspect a "terrorist," and a "white supremacist."

The account retweeted messages supporting Sens. Bernie Sanders and Elizabeth Warren, as well as posts against ICE agents, including one that said, "these people are monsters," and multiple posts condemning police, and supporting Antifa protesters, who often use violent tactics.

There were also many tweets of selfies, photos with a friend and ordinary memes and nonpolitical content.

As a high school student, the gunman had a "hit list" of classmates he wanted to "kill" or "rape," said former students who said they were told by school officials they were on the list.

Spencer Brickler said a counselor at Bellbrook High School in Ohio told him he and his sister were on Connor Betts' hit list. Brickler recalled sitting on a school bus about nine years ago when he saw Betts getting escorted away by officers investigating the threats.

"He was kind of dark and depressive in high school," said Brickler, who was a freshman when the school counselor told him about the hit list. He said he had no idea what prompted Betts, then a sophomore, to put him or his sister on the list.

Several of Betts' former classmates told CNN that they recalled Betts being removed from the school for at least a year, but that he later returned to Bellbrook High.

The shooter later attended Sinclair Community College in Dayton but was not enrolled in the summer term, the school's president Steve Johnson said.

A former high school classmate said he and another classmate called police years ago to warn them that Betts had a "kill list."

David Partridge said a friend had showed him text messages she received from Betts referencing his "kill list," and that one of Partridge's relatives was on it. Partridge told his friend he was going to call police and said he convinced her to do the same.

"I said, 'Hey, I don't want to drag you into this, but we have to go to the police. This guy could go to the school, he could kill people, he could hurt my family, he could hurt you,'" Partridge recalled telling his friend.

Partridge said he believed the incident occurred about 10 years ago, when he was a sophomore at Bellbrook High School. He said police took his friend's cell phone as part of their investigation.

After calling police, Partridge said he confronted Betts over the phone.

"(I) said, 'Hey ... I hear there is this hit list, and you've got my family on there. What is this about? Why have you written these things?' He was really avoidant about me confronting him about this, denying it, and not angry, but just shocked that someone had gone up to him and said, 'What is this, Connor?'" Partridge recalled.

Partridge said he witnessed Betts being detained by police at school the following day.

CNN has repeatedly requested records pertaining to Betts from the Bellbrook-Sugarcreek school district.

Bellbrook-Sugarcreek Schools Superintendent Douglas A. Cozad confirmed that Betts was a student who graduated in 2013. In a statement, the superintendent said they need to get approval from their legal counsel or a court before releasing records. Although Betts is deceased, Ohio law offers broader protections for students' records and "we have no official documentation of the student's death at this time," the statement said.

CNN requested records from the Sugarcreek Police Department, and they responded with a file on Betts that showed "sealed records" had been expunged.

Another former high school classmate, who asked not to be identified out of concerns for his privacy, also recalled being summoned to a school administrator's office and being told he was "number one" on the list of students Betts wanted to kill.

Another source, who also asked not to be named for privacy reasons, told CNN that Betts sent messages about the list to one of his classmates, who told her mother. Her mother then notified the police, who came to the school and interviewed people on the list individually in the school's office.

"Personally, it freaked me out," said the classmate who was told she was on the list. "I started having panic attacks in the school building."

Another former classmate, who was not on the list, said whenever they hung out, Betts would talk about violence and use harsh language about women, like calling them "sluts."

Not everyone remembered Betts as a troubled teen. Betts' friend Brad Howard described the gunman as "a really nice kid" who was quiet and kept to himself.

Howard said he grew up with Betts and knew him for over 20 years. He said news of Betts' final act was "a kick in the teeth" to the community.

A longtime friend of Betts said the gunman practiced firing weapons at a local shooting range.

The friend, who requested anonymity for privacy reasons, said he had known Betts for more than 10 years and occasionally went to the Shoot Point Blank range with Betts. The last time was a few months ago. He said Betts owned three or four guns, including an AR-15 pistol, and another pistol.

The friend said he had no reason to believe Betts would ever do anything violent with the weapons.

"We would play basketball, go to the gym, drink together, smoke weed together," he said. "The Connor I knew was a funny guy, he was charming, he was fun to be around. He had a dry sense of humor but he was funny."

Betts belonged to a 'pornogrind band'

Betts was in a band called the Menstrual Munchies, recalled Zach Walton, a musician who booked the band for two shows in 2018.

Walton described those shows as all-day events that featured bands, including those who perform in a genre Walton called "pornogrind," in Missouri.

Pornogrind is an offshoot of goregrind and grindcore music; the lyrics discuss -- oftentimes in extremely graphic and violent ways -- pornographic and sexual themes, Walton said.

CNN reached out to some people who describe themselves as fans of the genre. For some of those listeners, the music is described as an "outlet," or a "coping mechanism" that they say helps them channel anger and stress.