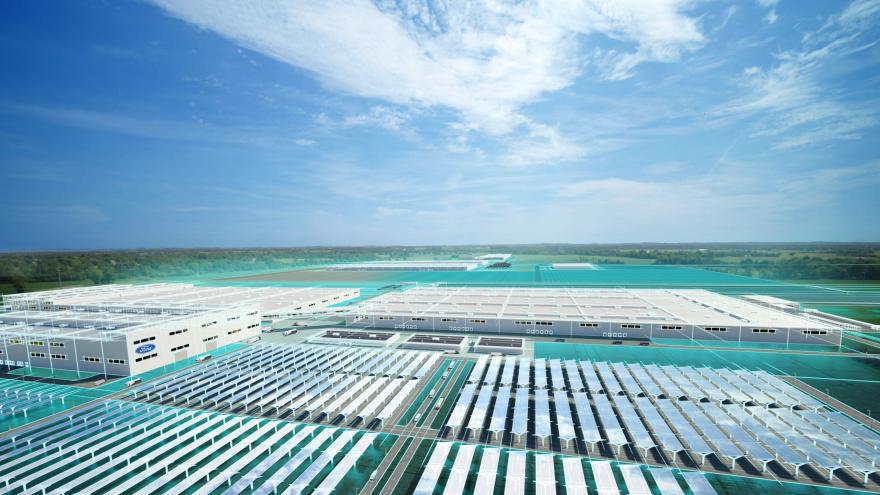 Ford's share of the investment will be $7 billion, Ford executives said. Ford previously announced it will spend $30 billion by 2025 on its shift to building more electric vehicles and that it expects 40% of its sales, worldwide, to be fully electric vehicles by 2030.

Ford chief executive Jim Farley called on the federal government to do more to support a transition to electric vehicles in an interview with CNN International. Long-term success for the company will require infrastructure and supply chain investments, along with subsidies for people to buy electric cars. Without all that, the American economy stands to get left behind by the rest of the world, Farley said.

"Essentially, we need support to help customers make this transition financially," he said in an interview with CNN International. "These are expensive vehicles. We seen in Europe, Germany, the Netherlands, Norway and China, the governments where they put the foot on the economics for the customers switch to these vehicles. We need that support."

The two sites, one in Kentucky and one in Tennessee, will employ a total of a total of about 11,000 people, and between them, the sites will include three electric vehicle battery manufacturing plants and a factory to build electric pickup trucks.

The Tennessee site, to be called Blue Oval City -- a reference to Ford's logo -- will cover 3,600 acres, three times the size of Ford's famous RiverRouge Complex in Dearborn, Michigan. It will employ 5,800 people and will include a battery manufacturing plant, battery materials recycling facilities, areas for various parts suppliers and an assembly plant for building electric F-series trucks.

The trucks to be built at the new location will not be F-150 Lightnings, Ford Chief Operating Officer Lisa Drake explained, but future electric F-series truck models. Ford is building the F-150 Lightning in Dearborn, and the company plans to put it on sale next year.

"The EV future is going to transform over the next few decades, and we want to be able to grow the capacity as the EV market expands," she said.

Including space for suppliers inside the facility was important, Drake said, as Ford tries to take more control of its parts supply chain. Ford and other automakers have had to halt or slow production of some models over recent months because of restrictions of supplies of computer chips and other critical parts. Ford wants to avoid that sort of problem with its supply of electric vehicle batteries, Drake said.

The smaller facility, to be built in Kentucky, will be called BlueOvalSK Battery Park. SK Innovations is working with Ford on battery manufacturing, and the Kentucky site will employ another 5,000 people. It will produce lithium-ion batteries in two identical battery factories situated next to one another. These two plants will be identical in size and layout to the third battery factory in Tennessee. All three battery factories were designed to be exactly the same, Drake said, to simplify their construction.

The factories will begin production of batteries and trucks in 2025, Ford executives said.

The manufacturing facilities at Blue Oval City are designed to be carbon neutral, Ford said. In other words, they will not add to the amount of carbon dioxide in the atmosphere. The companies also plan for the factories there not to send any waste materials to landfills, the automaker said.

Blue Oval City, the large Tennessee site, will include a battery materials recycling facility that will recycle waste material from battery manufacturing so that it can be fed back into the battery plants. The recycling facility will be operated by Redwood Materials, a company started by former Tesla senior executive JB Straubel.Ford recently announced a $50 million investment in Redwood to help the battery recycling startup to expand its operations. Redwood has said it can recover more than 95% of elements such as cobalt, lithium, copper and nickel from batteries.

Workers at the facility will be able to vote on whether or not they want to be represented by the United Auto Workers union that represents employees at other Ford factories, Drake said. Ford executives would not comment on specifically what sorts of incentives the company received from the respective states beyond grants for training potential employees.

Ford also announced it is investing a total of $525 million across the United States over the next five years to train electric vehicle repair technicians.