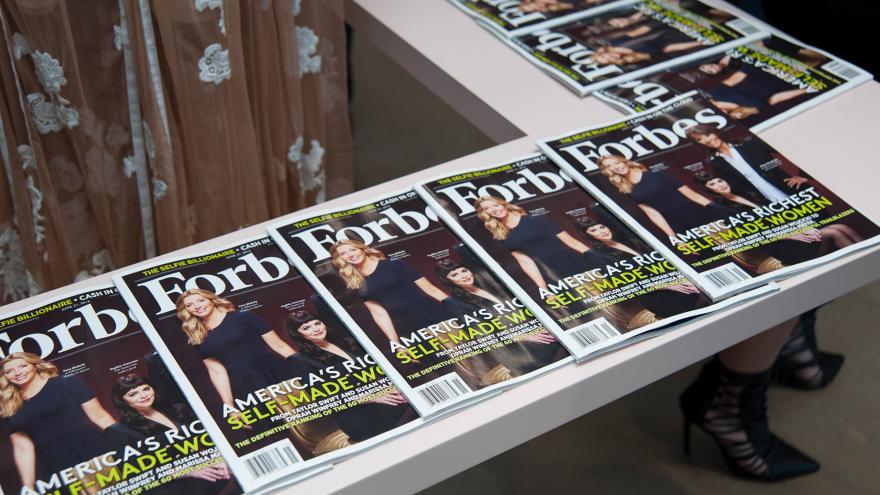 (CNN) -- At Forbes, a publication known for its coverage of the rich and powerful, its employees are fighting for something rather less glamorous: fair pay and job security.

On Tuesday, staffers at the 103-year-old magazine brand announced their plans to form a union.

The union would encompass about 105 employees who work in Forbes' editorial departments, including reporters, editors, designers, photographers, videographers and social media editors. More than 80% of those staffers have signed union cards with the NewsGuild of New York, which also represents the unions of The New York Times, Time magazine, NBC News Digital and others.

In a mission statement shared with CNN Business, Forbes staffers said they are unionizing for better workplace policies and protections including job security, pay equity and clear editorial independence, along with more efforts to improve newsroom diversity.

"Our current top-down structure restricts our ability to be inclusive and allows exploitative labor practices," the union wrote. "We want a better balance of power and, most importantly, we want our passion for journalism to drive us instead of the fear of losing our jobs. The unhealthy work culture takes labor for granted, shows a clear lack of interest in retaining talent—from ambitious, entry-level journalists to more experienced veterans—and perpetuates a lack of diversity in the newsroom."

Forbes joins the massive wave of unionization that has occurred throughout the media industry. Last year, more than 1,800 journalists unionized with the NewsGuild and the Writers Guild of America, up from about 1,500 the prior year, according to research conducted by Axios. Recent efforts include digital-native newsroom Insider and the tech workers at The New York Times.

Sarah Hansen, a breaking news reporter at Forbes who also serves on the organizing committee, told CNN Business that the conversations among Forbes staffers on the decision to unionize began last summer.

"It's fair to say the [pandemic] played a role," Hansen said. "A lot of the goals that we have were thrown into a clearer light once we were working from home and everybody's work-life balance got destroyed."

Some specific issues Forbes union hopes to address include a lack of overtime pay, abrupt changes in job requirements and more transparent pathways to promotions. The union also hopes to secure just cause — a labor protection that requires an employer to build a case for why an employee should be fired — in its contract. Staffers in The New Yorker's union had advocated for just cause since announcing their intention to unionize in 2018 and reached an agreement with their management last year.

"We're looking to put into practice things that have become standard at other media organizations," Ariel Shapiro, a media and entertainment reporter at Forbes and a member of the union's organizing committee, told CNN Business.

The union wrote in its organizing letter that it plans "to address diversity within our newsroom without fear of retaliation. Forbes needs a measurable action plan to help improve newsroom diversity for all position levels and a committee that holds management accountable."

Forbes made several commitments to diversity initiatives last year such as appointing an assistant managing editor to focus on diversifying the company's recruiting and hiring and creating a fellowship for students from historically Black colleges and universities. But the union claimed in its letter that about a dozen people of color had left the editorial staff since 2017.

The union effort comes amid reports that Forbes is being sold. Reuters reported last month that Forbes has received multiple bids, several of which would keep it a privately held company and one that could involve a merger with a special purpose acquisition company. The magazine was primarily owned by the Forbes family until 2014 when Integrated Whale Media Investments, a Hong Kong-based investor group, purchased a majority stake. (Disclosure: This writer interned at Forbes for three months in 2014.)

"If it's not this deal that's being reported in various outlets, it could be any other deal," Shapiro said. "The point is to have an understanding with management that transcends any new acquisition."

The union is seeking voluntarily recognition from Forbes management. Forbes did not respond to a request for comment.

"We're prepared to come to the table in good faith and have a lot of productive discussions and we hope that Forbes does too," Hansen said. "There's been a lot of change, and we're joining thousands and thousands of our peers in the same goal to make things more collaborative, more inclusive, more transparent across the board."