For veterans in Congress, the mission to help people escape from Afghanistan is personal 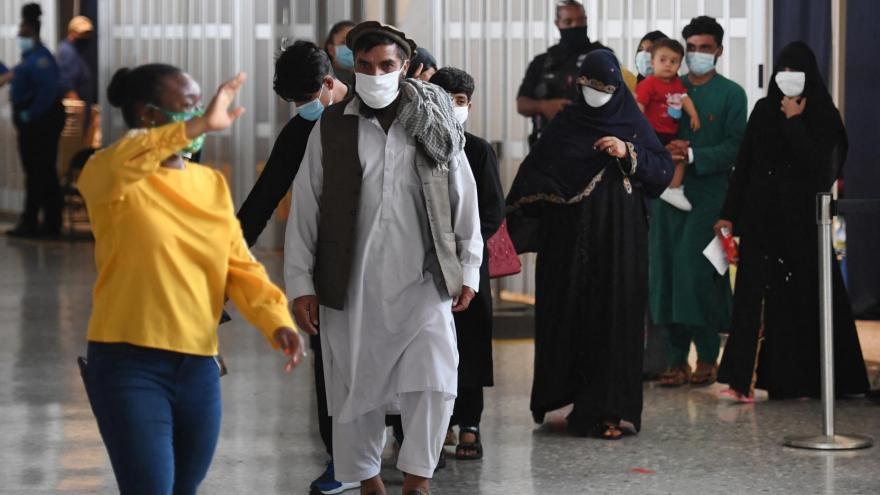 Afghan refugees arrive at Dulles International Airport on August 27 in Dulles, Virginia, after being evacuated from Kabul following the Taliban takeover of Afghanistan.

(CNN) -- The requests for help evacuating Americans and Afghans have come from every direction for the military veterans serving in Congress: from friends, from former platoonmates, from constituents and from Afghans they served alongside on the front lines.

Congressional offices this month turned into around-the-clock operations to help get people out of Afghanistan amid the chaos and frantic scramble to evacuate Americans, Afghan interpreters and other vulnerable Afghans ahead of an August 31 deadline for the US military to complete its withdrawal.

The State Department told lawmakers to stop their efforts after the ISIS-K attack on Thursday outside the Kabul airport, which killed 13 US military personnel. But for veterans and others who served in Afghanistan, the overall effort this week particularly hit home as they looked to any contact they might have with a line into the country to help.

"Everything there is done through personal connections," said Rep. Michael Waltz, a Florida Republican and former Green Beret. "Our congressional offices are turned into operation centers, helping people on the ground, because it wasn't being done."

RELATED: 4 of 5 San Diego-area families stuck in Afghanistan are secure, in process to return to US

Waltz and other lawmakers have been inundated with requests, and they expressed frustration that they've had limited help from the State Department, beyond being given an avenue to submit names to get cleared for evacuation. Many say they've had to go around the State Department to work to help get people past Taliban checkpoints and out of the country.

"We're having to fight through our own government's bureaucracy to save American citizens," Waltz said.

Rep. Mark Green, an Army veteran who served in Iraq and Afghanistan, has been on the phone with the State Department at odd hours and helped "probably 200" evacuees get out of the country. "They're overwhelmed right now," he said, "so we're calling at night" when the phone lines will be less busy.

"I still had about a 25-minute wait time to get to somebody at 2 a.m.," said Green, a Tennessee Republican.

Following Thursday's attack, the State Department has told Capitol Hill offices not to direct evacuees to the airport gates on their own. "We are hearing reports of congressional staff continuing to direct individuals to HKIA," read the message, referring to Hamid Karzai International Airport in Kabul. "All staff engaging in this type of uncoordinated messaging to people on the ground must cease due to the security situation."

The Commander of the US Central Command, Gen. Frank McKenzie, told reporters Thursday afternoon that the Department of Defense is still using buses to bring some Americans to the airport, but only as long as it is secure. "We will coordinate very carefully to make sure that it's safe for American citizens to come to the airfield," said McKenzie. "If it's not, we'll tell them to hold, and then we'll work other ways to try to get them to the airfield."

But one senior Democratic Hill staffer said they haven't heard more from the administration.

"The lack of communication, transparency, and coordination is f--king absurd," the staffer said. "Our caseworkers are overwhelmed."

Rep. Andy Kim, a New Jersey Democrat and former diplomat who served as an adviser to Generals David Petraeus and John Allen in Afghanistan, said he's had more than 6,000 requests come through his office, including from other districts.

"I literally started with people that I knew out in Afghanistan, calling, texting, emailing," Kim said. "Some of them we're able to get out, and those are some of the good news stories that help kind of propel us to keep pushing."

Rep. Ruben Gallego, a Marine veteran who served in Iraq, recalled one case his office took on when he was contacted by a Marine in his battalion seeking help to get out an interpreter and his family, along with an American citizen and his family. Gallego said he was on his honeymoon when he went to work to get the interpreter and the others out of the country, finding names and then calling contacts on the ground.

"It was just a consistent hunting down," said Gallego, an Arizona Democrat. "I heard of names and then I'd call the colonel I heard was in charge and text them. I texted one guy who said, 'I'm back in country but here's the person,' and then I'd call them, my staff would email them."

Rep. Jason Crow, a Colorado Democrat who served in Afghanistan and Iraq and was an Army Ranger, explained how offices send the names of Americans and Afghans on to the State Department to facilitate their evacuation. "We receive a request," he said, "and it's coming from every angle. It's texts that I receive, emails that I receive, messages on Signal that I then pass along to my team."

"We try to get folks to fill out a form that we've created, and then we submit it to the State Department," Crow told CNN. "That element of the process is less clear. I mean once we submit names, what happens after that is not something that, that I have clarity on right now." Crow added that his office has processed over 1,200 requests from those seeking to evacuate.

Kim acknowledged on Wednesday the State Department contact only goes so far when lawmakers are trying to help Afghans navigate the treacherous path to the airport.

"I would be on the phone with them, and I can hear the chaos in the background outside the airport gate," said Kim. "People saying, 'I can't get through.' Like, 'what can we do?'"