For the first time ever, the US reported more than 4,000 Covid-19 deaths in one day 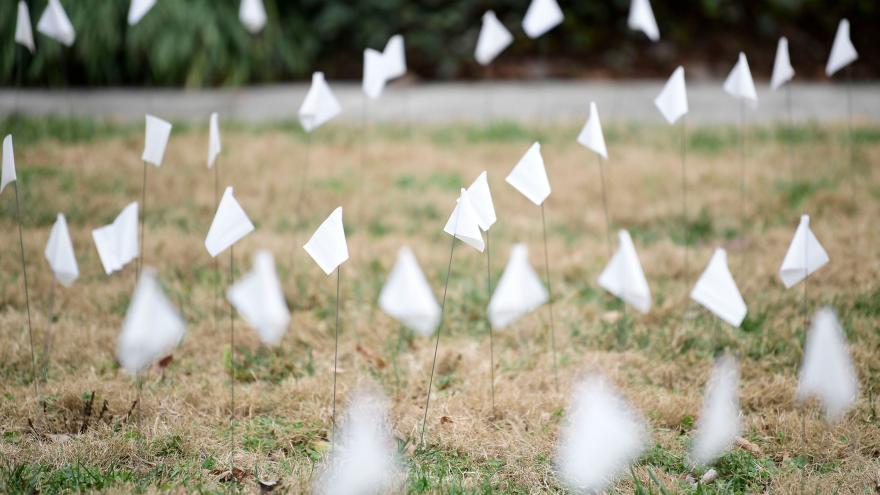 (CNN) -- The US reported more than 4,000 Covid-19 deaths Thursday -- the most virus-related deaths the country has reported in one day since the pandemic's start.

It's the third day in a row of record daily deaths from the disease, according to data from Johns Hopkins University, while the number of people who have been infected topped more than 21.56 million.

The Centers for Disease Control and Prevention's most recent forecast projected there will be between 405,000 and 438,000 deaths by the end of the month. The previous forecast, published December 30, projected up to 424,000 deaths by January 23.

The ongoing spread of the virus and climbing number of deaths come even as the US is working to distribute vital Covid-19 vaccines -- a process that has been criticized for being too slow.

US Surgeon General Jerome Adams said Thursday that states able to vaccinate beyond phase 1a recommendations -- which include health care workers and residents of long-term care facilities -- should do so.

"States not only can, but SHOULD aggressively expand vaccinations to other phases if current supply exceeds demand in phase 1a," the surgeon general said on Twitter.

The guidance by the CDC's Advisory Committee on Immunization Practices that identifies prioritized groups for vaccination, Adams said, are "recommendations -- not mandates." He shared a picture of other groups identified phases 1b and 1c, including frontline essential workers, people age 75 and older and those with high-risk conditions, among others.

Adams' comments were echoed by Kentucky Health Commissioner Dr. Steven Stack, who said Thursday that sticking to guidelines of who should be prioritized for the vaccine "should not stand in the way of" facilities using all the doses they receive.

"Sometimes, more than 30% of eligible people decline to receive the vaccine when offered," Stack said. "There's a need to be flexible or else we don't administer the vaccine."

"A shot in a willing arm is ultimately a higher priority than a shot in only certain arms," he added. "We're prioritizing, but focusing on not letting vaccines sit in a freezer, where it helps no one, for extended periods of time."

In an interview with NPR, Dr. Anthony Fauci said the vaccine rollout still needs a couple weeks to catch up to earlier projections. But if that doesn't happen, he said, "then we really need to make some changes about what we're doing."

Nearly 6 million people have received their first dose of coronavirus vaccines, the CDC said, and another 21.4 million doses have been distributed.

That's far short of what was promised: Officials with the federal government's Operation Warp Speed had previously promised 40 million doses would be distributed by the end of December, and 20 million would be vaccinated.

"We overpromised and underdelivered as a nation," Dr. Stack said in a briefing, adding his state received just a third of what they expected.

"Had we just projected realistic quantities, the public wouldn't have seen this as a shortcoming -- we would have recognized it for the incredible accomplishment it was to have even this much vaccine this fast."

Pennsylvania Secretary of Health Dr. Rachel Levine described finding out "a week or two in advance" how many vaccine doses the state would receive.

"But then the actual amount that is going to be transported often ends up being somewhat different depending upon the variables that Operation Warp Speed has to deal with in terms of manufacturing and how much they get."

"I think it's important not to set unrealistic expectations that then disappoint the public," she added. "It could make (the public) become disillusioned with the program."

Meantime, hospitals are being flooded with coronavirus patients, with a record 132,476 patients in US hospitals on Wednesday, and 132,370, the second highest number, on Thursday, according to the Covid Tracking Project.

At the epicenter of the virus is California, a state that has been among several to report record hospitalizations, surging deaths and health care systems struggling to meet the demand.

There were 459 new coronavirus deaths Wednesday and a record high of 22,820 patients being treated in hospitals for the virus, California's Department of Public Health reported.

More than 8,000 of those are hospitalized in Los Angeles County, where the emergency medical system is under a huge strain, the health department said.

"This is a health crisis of epic proportions. I am more troubled than ever before, and in part, my concern is rooted in the reality that it will take so much more for us to slow the spread given the high rate of community spread," Los Angeles County Department of Public Health Director Barbara Ferrer said in a statement.

As of Thursday, a person was dying of Covid-19 in the county every 8 minutes.

In an interview with CNN's Wolf Blitzer, Los Angeles Mayor Eric Garcetti said more vaccinations and funding were needed to help get the virus under control. But it's also "on us as individuals," he said.

Kentucky saw two highs Wednesday: 5,743 new cases reported in one day and a positivity rate of 11.7%, the highest rate in the state since May.

"Today's numbers show how critically important a centralized effort and response is to defeating this virus," Gov. Andy Beshear said.

In Louisiana, the spike in cases and hospitalizations has led to tighter coronavirus restrictions in New Orleans. As of Friday morning, gatherings and special events are not allowed except for people living together in a single household, and outdoor tables at bars and restaurants will be limited to six people of the same household, according to a statement from the mayor's office.

"These next few weeks will be a defining moment in the history of our response to this pandemic," Mayor LaToya Cantrell said. "These restrictions are for the short term, but they are in place for a reason. "

At least 56 cases of a coronavirus variant first discovered in the UK have been identified in the United States, after health officials in Texas and Connecticut announced cases in their states.

The patient identified in Harris County, Texas, which includes Houston, was a male between the ages of 30 and 40 with no travel history, officials said -- the implication being that the variant is circulating locally.

Connecticut Gov. Ned Lamont said health officials in his state identified two cases in people between 15 and 25 who live in New Haven County. Both recently traveled -- one to Ireland and one to New York state.

Cases of the variant have been found in other states including California, Florida, Colorado, Georgia, New York and Pennsylvania. And health experts warn it could become a problem if the US doesn't get control of coronavirus' spread.

"We're playing a very dangerous game with this virus right now," Maria Van Kerkhove, the WHO's technical lead for the coronavirus response, told CNN Senior Medical Correspondent Elizabeth Cohen. "What worries us is that the longer this spreads the more opportunities it has to change."

Van Kerkhove pointed out that many mutations won't have much of an impact on the virus, but if a virus changes its genetics in just the right way, tests might not be able to detect it as easily, and vaccines might not work as well against it.

The virus has more chances to mutate in countries like the United States, which is seeing unprecedented and uncontrolled spread.

She pointed out that some countries, such as Australia and New Zealand, have done a better job controlling the pandemic.

"It's completely up to us to be able to bring the virus under control," she said. "The virus is controllable, including these variants."