For many tribal nations, the pandemic also brought an increase in population 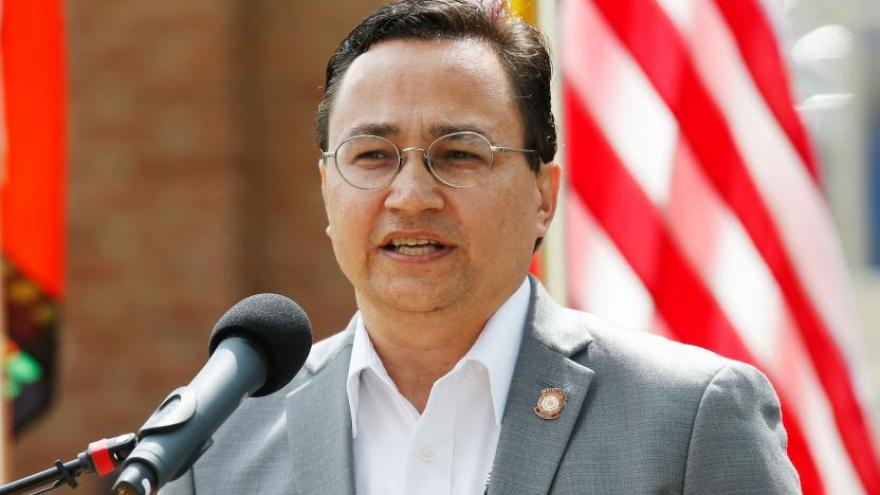 (CNN) -- Soon after the coronavirus began spreading in the United States, it became clear that the pandemic would hit parts of Indian Country hard.

But as they emerge from the worst of the crisis, several tribal nations have seen one positive trend unfold: An increase in population.

The Navajo Nation saw its numbers of enrolled citizens climb from about 306,000 to nearly 400,000 in the last year -- a 30% jump that recently put it ahead of the Cherokee Nation as the most populous tribe in the US.

Other tribes noticed upticks, too, albeit less dramatic: The Cherokee and Choctaw Nations also reported enrollment increases beyond usual levels.

That people who weren't previously enrolled with a tribe would see the benefits of doing so at this moment isn't particularly surprising, said Desi Small-Rodriguez, an assistant professor of sociology and American Indian studies at the University of California, Los Angeles.

"Tribes have risen to a place of power and authority and caretaking of their citizens that local, state and the federal government has not," she said. "I think people are realizing that and acknowledging that."

Here's what experts and officials believe is behind the rise in enrollment -- and what having greater numbers could mean for tribal nations.

The enrollment process is one way that tribes can preserve their culture and traditions, while perpetuating a sense of belonging.

Because tribes are their own sovereign nations, each have their own enrollment requirements as well as rights and responsibilities that come with being a tribal citizen.

But even though someone may be eligible for tribal citizenship, there are a number of reasons they might not have enrolled, said Small-Rodriguez.

Some people may not see a need to enroll because they don't live on a reservation or don't feel connected to their heritage. Some may already have access to adequate benefits and services through their jobs. And others simply might not have gotten around to filling out the paperwork yet.

Whatever the reason, the pandemic prompted many people to reconsider.

Perhaps the most obvious benefit to enrolling in a tribe during the pandemic involved access to additional financial assistance.

Through the Coronavirus Aid, Relief, and Economic Security (CARES) Act and the American Rescue Plan, tribal nations received billions of dollars to put toward their citizens, whether through direct payments or in the form of housing, child care or other assistance.

The Navajo Nation used some of its initial Covid-19 relief funds on payments of about $1,350 to enrolled adults and $450 for enrolled children, and tribal legislators have proposed a second round of checks. Similarly, the Cherokee Nation recently announced it would be providing $2,000 payments to every enrolled citizen.

"There are resources at stake -- actual material resources and material assistance -- that can really change people's lives right now and for the long term," Small-Rodriguez said.

Tribal leaders also pointed to their handling of the pandemic and the sense of safety it cultivated in their communities.

As federal, state and local leaders failed to mount a unified response to contain the pandemic, and as face masks became another flashpoint in the culture wars, tribes took matters into their own hands.

The Navajo Nation was one of the hardest hit communities in the nation. But it implemented strict lockdowns to contain the spread of the virus, and its mask mandate remained in effect well after Arizona eased rules on face coverings. Once vaccines started rolling out, the tribe worked quickly to build confidence and hold mass vaccination drives.

As of last week, the tribe estimated that at least 70% of Navajo residents had been fully vaccinated -- the threshold for herd immunity.

All of those factors, said Navajo Nation President Jonathan Nez, contributed to the tribe's increase in enrollment -- as well as an influx of Navajo in urban areas returning to their homelands.

"They're equating enrollment and coming home with being safe from the virus," Nez said.

The Cherokee Nation has seen more than 13,000 new citizens enroll since the beginning of last year, with a total current population of nearly 393,000, according to a spokesperson for the tribe.

Principal Chief Chuck Hoskin Jr. attributes the rise in part to the pride he believes people felt in his government's Covid-19 response, whether on the testing front or the tribe's early success in administering vaccines.

But it goes deeper than that, Hoskin said. The Cherokee Nation has developed a robust health care system over the past decade and made significant investments in public education and housing in recent years -- steps that Hoskin believes appeal to many of those recently enrolled.

"I think that they think that is what a government ought to do, and a lot of people in this country are looking for that kind of assistance," Hoskin said. "Cherokee Nation believes that we ought to play a role in those areas."

The Choctaw Nation, which saw its enrolled citizens increase from about 192,000 to more than 204,000 since the start of the pandemic, cited several factors driving the tribe's population growth.

Some of those reasons were practical, Randy Sachs, the tribe's director of public relations, told CNN. Families simply had more time during the pandemic to gather the documents required as part of the citizenship application. And concerns about when Oklahoma would begin issuing Real ID-compliant driver's licenses may have prompted others to seek a tribal citizenship card to use for domestic air travel.

Other individuals were driven by ancestral pride. Sachs said the Choctaw Nation saw a "considerable increase" in applications following the Supreme Court's decision in McGirt v. Oklahoma, which found that a large swath of eastern Oklahoma was Native American land for purposes of federal criminal law.

"Perhaps they didn't consider the benefits previously, but they are seeing the value now of what it means to be a part of not just a family, kinship group or community, but being part of a sovereign nation that has a government, that has laws, that has jurisdiction, that has power and authority," Small-Rodriguez said.

Greater enrollment numbers could potentially open tribal nations up to greater funding allocations from the federal government, though Hoskin said that tribes would still be underfunded by Congress even after adjusting for population increases.

It also means tribes are responsible for more people, and will have to ensure their services can meet the demand.

"We have to still be there for every citizen," Hoskin said. "I do think it's going to, in a sense, put some stress on our budgets, but that's a stress we welcome because we ought to be helping all the Cherokee people."

In Arizona, Navajo voters helped flip the state for Democrats in last November's election, and Nez said he sees his tribe as an integral part of implementing change in the future.

"I think this shift that's happening nationally, where indigenous peoples are finally being recognized for their contribution to this free country of ours, could set a tone for even more influence from indigenous peoples in this country," he said.

Ultimately, Small-Rodriguez said, having more tribal citizens is a signal that indigenous people are still here on this land -- and are only growing stronger.

"Just the fact that we have more enrolled citizens who can carry on what being an enrolled citizen means to them is a very powerful example of indigenous resistance and indigenous survival in the face of every attempt to erase us," she said.