For flight attendants, getting people to wear masks is now one of the hardest parts of the job 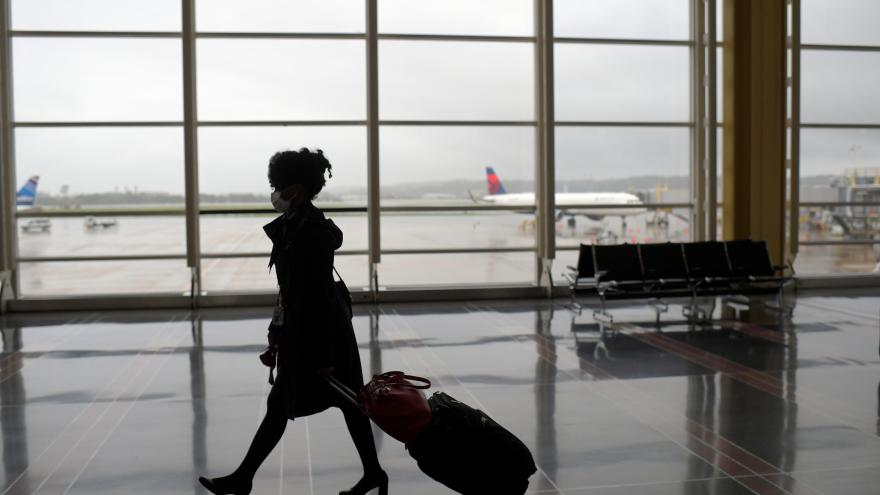 (CNN) -- Masks have become a matter of course on airplane flights, and unfortunately, so have ugly confrontations about wearing them. Since the pandemic started, flight attendants and crew members have reported more than 200 incidents to the federal government in which they were harassed or threatened over in-flight mask policies.

In one case, a flight attendant said four passengers who would not keep their masks on harassed her over what they called "a simple mask issue." The situation got so tense, the plane had to return to its gate. In another incident, a passenger who kept removing his mask rolled his eyes and told a flight attendant to shut up. Then, he yelled it: "SHUT UP!"

Other flight attendants have been met with passive aggressive displays of defiance. One flight attendant said a passenger refused to put his mask back on after the in-flight beverage service despite multiple warnings. Finally, he told the crew, "Well, if I hold my water bottle, I cannot wear my mask, right?" He then sipped water slowly for the rest of the flight, exploiting a policy that allows passengers to remove their masks while actively eating or drinking.

Flight attendants are put in a difficult spot

When airlines institute mandatory mask policies to keep their business operating, the task of enforcing them often falls to flight attendants. In the United States, where such a basic safety measure against Covid-19 is highly politicized, that task can be challenging. Sometimes, it's downright dangerous.

"Enforcing mass compliance has been one of the most difficult parts of our job," says Allie Malis, a flight attendant for American Airlines and a government affairs representative for the Association of Professional Flight Attendants. "We're considered essential workers, but there's no hazard pay or anything like that."

While airlines and crew members note that a vast majority of passengers do abide by mask policies, flight attendant unions say their members regularly encounter travelers who respond with belligerence, verbal threats and even physical assault.

In the absence of federal mask regulations, many flight attendants felt there was little they could do to ensure compliance -- or protect themselves against backlash and aggression.

But with President Joe Biden planning to issue an executive order Thursday requiring masks in airports and on planes, that could be about to change.

The FAA is adopting a stricter approach

The situation has become so troubling that the Federal Aviation Administration recently announced it would adopt a stricter approach to dealing with unruly passengers.

Through March 30, 2021, passengers who assault, threaten, intimidate or interfere with airline crew members can face fines of as much as $35,000 and even imprisonment, according to the FAA. The agency had previously addressed such instances with warnings and civil penalties, among other methods.

"We have zero tolerance for threatening or violent behavior by passengers, and we will take the strongest possible enforcement action against any passenger who engages in it," FAA Administrator Steve Dickson said in a video message last week.

In a January 13 news release, the FAA said that it had seen a "disturbing increase in incidents where airline passengers have disrupted flights with threatening or violent behavior," citing both refusals from passengers to wear masks and recent violence at the US Capitol.

The change comes after the FAA in December proposed civil penalties against two passengers who allegedly assaulted flight attendants who asked them to wear masks.

In one of the cases, the agency alleged that a passenger on an Allegiant Air flight last August hit a flight attendant, screamed profanities and grabbed a phone from them as they as were talking to the captain about the passenger's refusal to wear a mask. The agency proposed a $15,000 fine.

In a separate case that same month, a passenger on a SkyWest Airlines flight from Atlanta to Chicago took off their mask, pestered other passengers and sexually harassed a flight attendant, the FAA alleged. The agency proposed a $7,500 fine.

In November 2020, the FAA reported 108 unruly passenger incidents for the year, though the agency does not specify how many of those incidents concerned the issue of face masks.

All major US carriers already have mask policies in place, while several have instituted "no-fly lists" banning certain passengers who refuse to wear masks from flying with them during the pandemic.

As of early January, United Airlines says it has banned nearly 615 passengers for non-compliance since it strengthened its mandatory mask policy last June. Delta Air Lines told CNN more than 700 people have been added to the company's no-fly list since last May -- a small proportion, the company noted, considering about 1 million travelers fly with them each week. American Airlines did not provide a specific number to CNN, though it said a vast majority of customers abide by its mandatory mask policy.

"The lack of federal guidelines or mandates has made (flight attendants') jobs harder, and it has been made harder by inconsistent mask mandates across the United States," Taylor Garland, spokeswoman for the Association of Flight Attendants-CWA, told CNN.

Garland added that a common retort that flight attendants would hear from passengers unwilling to wear masks is that, "It's not the law." A federal requirement, she said, would "eliminate that talking point for them."

A federal mask mandate would also address what passengers' rights groups see as a problem of uneven enforcement that has resulted from airlines being left to institute and enforce Covid-19 safety measures on their own.

"It's very questionable what authority airlines have in the public accommodation to tell people that they have to wear a mask and if they don't, what the penalties could be," Paul Hudson, president of FlyersRights.org, told CNN.

For example, parents have reported being removed from flights because their toddlers weren't wearing face coverings -- despite conflicting public health guidance on whether young children should be required to wear masks.

While many airlines have since revisited their mask requirements for children, Hudson said he thinks the uniform standards would enhance safety and fairness.

"Let's suppose we left it up to the airlines to decide whether you could smoke on an airplane. That was the case for a long time, and every airline had its own policy. That didn't work out so well," he says. "Uniform rules and laws are the best way and often the only way you can have fairness, safety and health security in this case."

More than 30 transportation unions filed a petition with the Department of Transportation last year calling for masks to be mandatory on all commercial transportation, while FlyersRights.org formally petitioned the department to do the same on planes and in airports.

But the Trump administration declined to mandate masks on planes, trains, buses and ferries, arguing that face coverings were already required in practice.

Then-Transportation Secretary Elaine Chao's general counsel wrote in a letter that such regulations were not needed, citing protocols issued by the Centers for Disease Control and Prevention and mask policies already in place by airlines and other transportation systems. The department also added "there should be no more regulations than necessary."

There are still questions

Questions remain about when exactly Biden's executive order requiring masks on interstate travel will take effect and how it will be enforced.

Advocates such as Hudson worried it wouldn't be enforceable without formal approval from the Department of Transportation.

"Joe Biden has made very clear that he intends to institute a national mandate across the board, but also specifically for transportation, including planes," Garland said. "That will go a long way to backing up flight attendants and making it very clear that you must come to the plane with a mask on and keep it on at all times."