For Biden, the White House is 'a Monday-through-Friday kind of place' 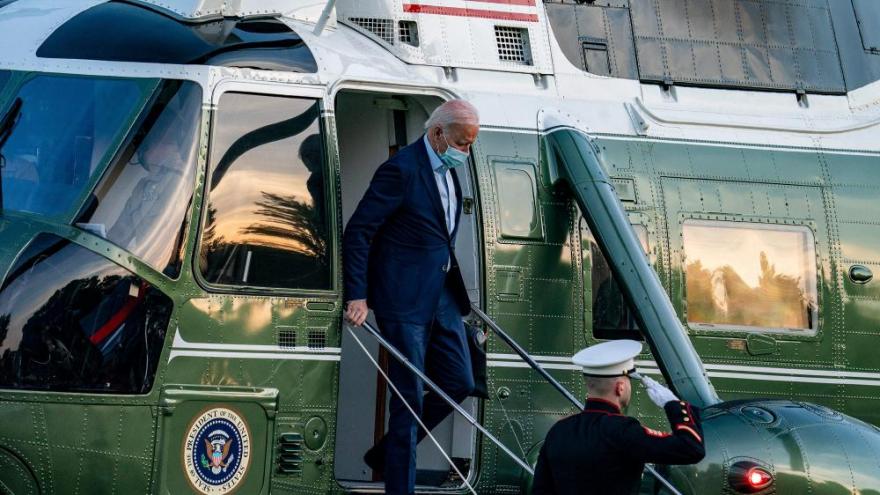 President Joe Biden steps off Marine One earlier this month after spending the weekend at Camp David.

(CNN) -- Beginning in 1973, when he was a United States Senator from Delaware, Joe Biden had a ritual: nearly every evening he would hop a train back to Wilmington after his work day on Capitol Hill, spending most nights and weekends at the place he considered home, 100 miles from Washington.

Doing so earned him the nickname "Amtrak Joe," and in 2011, the Wilmington depot was renamed the Joseph R. Biden Jr. Railroad Station. In all, he took more than 8,000 of those roundtrips during his 36 years in the Senate and, though less frequently, his eight years as vice president, no small feat for a busy politician.

Since taking office four months ago, the President has spent more weekends away from the White House than he has stayed there, almost three times as many. Counting this Memorial Day weekend, Biden has been in Wilmington nine weekends and passed five weekends at the presidential retreat, Camp David, in rural Maryland. The numbers far exceed any modern president's weekends off-campus at this point in his tenure.

"He thinks of (the White House) more like a Monday-through-Friday kind of place," said one of several people familiar with Biden's thinking who spoke to CNN for this story and were granted anonymity in order to preserve relationships. This person said the people's house was akin to presidential corporate housing. "Really, really high-end corporate housing."

"Joe Biden has always been the guy who goes home to Delaware," said another person who has worked with the President. "The White House isn't going to change that."

The residence is, however, the symbolic pinnacle of political achievement, which begs the question why he would rather not have been there for 14 of the 19 weekends he has been president

Despite its 54,900 square feet, bowling alley, movie theater, tennis pavilion, acres of grounds and dozens of staff, Biden's instinct -- sometimes last-minute, say those familiar with his schedule -- is to get away from it for a weekly breather. One person said it's the escapism aspect of getting away from "the office" that drives him to seek another location.

"Even if it's Tuesday and the schedule says he will be at the White House for that weekend -- or it doesn't say he's going anywhere -- in the back of my mind, I know he's going to not be at the White House," said another person who works as part of the presidential entourage, acknowledging that now used to Biden's habits, they plan accordingly. "The worst is when the decision happens on a Wednesday to leave on Friday, or even a Thursday to leave on Saturday."

Part of the issue is that Biden is quite simply no longer "Amtrak Joe," and that moving the President of the United States from point A to point B requires dozens of people, military precision planning and the coordination of law enforcement, from the Secret Service to local police officers. Tension is building between White House staff tasked with delivering the news of a weekend away and the logistical apparatus that allows it, said another person familiar with operations.

"President Biden is deeply proud of his roots and his family and it has been a staple of his time in public life to never lose touch with either," White House deputy press secretary Andrew Bates said in a statement to CNN. "Presidents of the United States are constantly on the job, regardless of their location - whether they're on a state visit overseas or just 100 miles from the White House for a short trip to Wilmington, DE. And as all Americans can agree, it's important for leaders to avoid becoming ensconced in Washington, DC."

Need for peace and quiet

It's not wholly unusual for presidents to feel the urge to escape the confines of the White House campus, and many before Biden have taken hearty advantage of doing so.

More recently, Donald Trump would get away at his private Palm Beach, Florida, club, taking about eight leisure weekends from the White House by the same point in his presidency that Biden is at now. Barack Obama was an early fan of weekends with his family at Camp David, going approximately a half-dozen times in his first four months in office.

Visiting retreats or second homes, most of which were personal touchpoints for a president, doesn't make a commander in chief immune to the demands of the job. "He's always working, no matter where he is," said one administration official of Biden's habits, noting he spends a good deal of time on the weekend prepping for the week ahead, or thinking on larger ideological conundrums. "He is by no means 'checked out' just because he isn't in the Oval (Office.)"

Dwight Eisenhower, for example, often used his frequent weekend retreat near Gettysburg, Pennsylvania, as a place to unwind, but to also strategically contemplate how to end the Cold War. In all, Eisenhower spent 365 days of his presidency on the property, which is now a National Historic Site.

"I think there's something to be said about the White House being both a home and an office for a president," said Mann. "It can be overwhelming. It's also why most presidents have picked getaways or second homes that have an outdoor element, a place to escape for peace and quiet."

Mann noted Harry Truman spent 175 days of his presidency at the Little White House, a tropical retreat in Key West, Florida, that he used with frequency during the White House's massive renovation from 1948-1952. Biden has faced his own challenges with White House construction during his short tenure; weeks of an underground duct-work and upgrade project have plagued the South grounds for the last several weeks.

The absence of a president and first lady in the White House over multiple weekends also leaves the Executive Residence staff with a lighter workload. With both Joe Biden and first lady Jill Biden away, the number of butlers, housekeepers and cooks dwindles to a skeleton crew.

"The staff work there because they want to serve the president and the first lady," said someone who works in the White House residence. "I think it's lonely for them at times. You miss taking care of the principals."

Another person familiar with the mood of the Biden residence noted the first couple is well-liked by the White House staff, but their frequent absences make it difficult to get to know them. The majority of executive residence workers have been there for more than a decade, and many become trusted confidantes who can understand and anticipate the proclivities and peccadillos of a first family.

"He has said he doesn't always feel comfortable with people around to wait on him, which I think is probably true, and is certainly taken into account by the people who tend to the residence," said another person familiar with the living habits of the first family, referring to a February town hall with CNN where Biden said he wasn't someone who felt content being the focus of attention in his home. "I don't know about you all, but I was raised in the way that you didn't look for anybody to wait on you. And it's -- we're -- I find myself extremely self-conscious," said Biden of life in the White House. "There are wonderful people who work at the White House. But someone, you know, standing there and, you know, making sure -- hands me my suitcoat or ...," he trailed off.

The person who works in the White House thinks even if that was how Biden felt four weeks into his time in the residence, he may feel differently now with four months under his belt. "A president gets new, ironed sheets on his bed every day. And he should -- he's the president! How does anyone not like that?"

The Bidens have not overtly personalized the residence yet, instead making small changes and adding special touches, said one person familiar. (A recent Biden addition is the building of a green lattice fence around the Jacqueline Kennedy Garden on the east side of the building, erected to create a daytime dog-run for the first couple's two German Shepherds Champ and Major.)

One of the people who works in the White House speculates it's possible Biden might still think of the White House as the spot where his former boss, Obama, lived and worked. "It's sort of like moving into your ex's place," said the source. "It wasn't an issue for Trump, or Obama, who didn't go there as a second-lieutenant, but for someone like Biden who spent so much time at the White House over the years meeting with his 'boss,' it could be weird to basically move into that person's old apartment."

Whatever the impetus for Biden to get away as much as he has, he is clearly seeking a reprieve, be it mental or emotional or physical.

"You know, I don't know what I ever expected it to be," Biden said during the town hall about actually residing in the White House. "I said when I was running, I wanted to be President not to live in the White House but to be able to make the decisions about the future of the country. And so living in the White House, as you've heard other presidents who have been extremely flattered to live there, has -- it's a little like a gilded cage in terms of being able to walk outside and do things."

After the long holiday weekend is over, and Biden and the first lady and members of their extended family have soaked up the privacy and quality time offered in Wilmington, the President is scheduled to return to the White House on Monday.