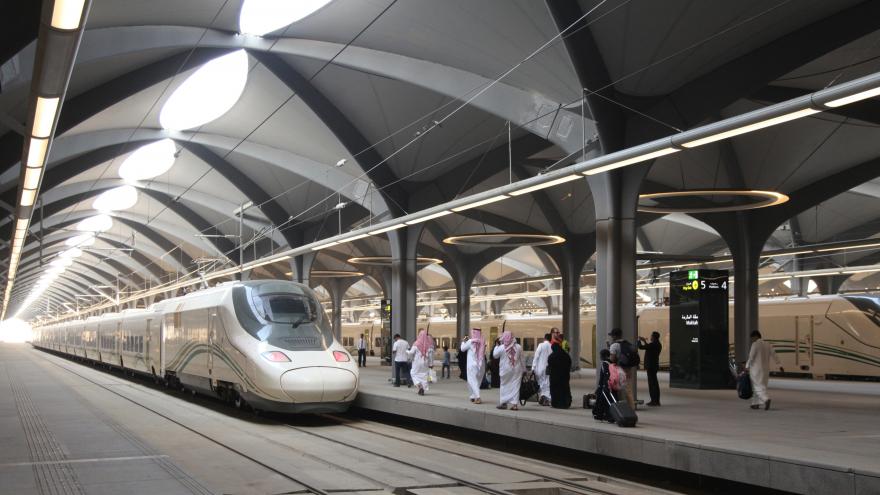 (CNN) -- As the world faces up to climate change, short-haul flights look increasingly unattractive to many travelers. The flygskam (flight shame) phenomenon that started in Scandinavia is already inspiring many travelers to reduce their reliance on airlines.

Until someone proves otherwise, high-speed rail is the most effective alternative to air travel for journeys of up to 1,100 kilometers (700 miles). Shuttling passengers between city centers at speeds of 290 kph (180 mph) or more, it offers a compelling combination of speed and convenience.

Since the 1980s, hundreds of billions of dollars have been invested in new high-speed, high-capacity railways across Europe and Asia, pioneered by Japan's Shinkansen and the Train a Grand Vitesse (TGV) in France.

In the last decade, China has become the undisputed world leader, building a 38,000-kilometer network of new railways reaching almost every corner of the country.

Spain, Germany, Italy, Belgium and England are expanding the European network with other countries expected to follow by the 2030s.

In 2018, Africa gained its first high-speed railway with the opening of the Al-Boraq line in Morocco and Egypt looks set to join the club before the end of the 2020s.

Elsewhere in the world, South Korea, Saudi Arabia and Taiwan have established high-speed routes and India, Thailand, Russia and the United States are among a growing group of nations committed to building new railways where trains will dash between major cities at speeds of more than 250 kph (155 mph).

But where can you travel on the world's fastest trains in 2022?

The world's fastest public train is also unique -- it's the only link in the world currently carrying passengers using magnetic levitation (Maglev) rather than conventional steel wheels on steel rails.

Connecting Shanghai's Pudong airport with Longyang Road station in the city center, it has a maximum commercial speed of 460 kph, completing the 30 kilometer journey in just seven and a half minutes.

Based on German technology, the Maglev trains fly along an elevated track, the powerful magnets providing a super-smooth, friction-free ride.

Using experience gained from more than a decade of regular operation, China has now developed its own 600 kph (373 mph) Maglev trains and has ambitious plans for a network of Maglevs, including a line between Shanghai and Hangzhou.

As well as boasting the longest network of high-speed lines in the world, China now has the fastest scheduled trains on the planet.

The CR400 "Fuxing" trains run at a commercial maximum of 350 kph (217 mph) but have successfully reached 420 kph (260 mph) on test. A statement of intent by China's booming railway technology industry, the Fuxing trains have been developed from previous generations of high-speed trains, which were based on technology imported from Europe and Japan.

Up to 16 cars long with a maximum capacity of 1,200 passengers, this impressive family of trains is packed with novel features, including at-seat entertainment, smart glass displays, wireless device charging, "smart cabins" and even variants designed for extreme weather conditions and autonomous operation -- the latter being the world's only automatic high-speed trains.

The fastest CR400 variants are currently deployed on the prime Beijing-Shanghai-Hong Kong and Beijing-Harbin routes.

However, the fastest member of the "White Worm" family is the 330 kph (205 mph) ICE3, which has been around since 1999. These sleek machines were built for the 180-kilometer (110-mile) Cologne-Frankfurt high-speed line and have squeezed the journey times between the two cities from two hours and 30 minutes to just 62 minutes since 2002.

Normal operating speed is 300 kph (186 mph), but the ICE3s are authorised to push up to 330 kph when running late. A maximum of 368 kph (229 mph) was reached on test runs. Key to the ICE3's performance are the 16 electric motors distributed throughout the eight-car train, which delivers a massive 11,000 horsepower.

The design also forms the basis of the Siemens "Velaro" family of high-speed trains, which has been sold to Spain, Russia, Turkey, China and to Eurostar for its second generation international trains.

France is the long-time holder of the world speed record for conventional trains, set at an astonishing 574.8 kph (357 mph) on April 3, 2007. At 150 meters per second that's almost double the normal scheduled maximum of Train a Grand Vitesse (TGV) services, recognized across the globe as a pioneer of high-speed rail technology.

Europe's first dedicated high-speed network is still its best known and most successful, reaching out well beyond France's borders. The French railway industry has progressively pushed the boundaries of what is possible with conventional trains since WWII, smashing existing records in 1955 (331 kph), 1981 (380 kph) and 1990 (515.3 kph).

Today, high speed lines radiate from Paris to Lyon, Marseille, Bordeaux, Nantes, Strasbourg, Lille, Brussels and London with trains running at up to 320 kph on some routes. Over the last 40 years, the trains have evolved through several generations as the network has expanded.

The iconic orange TGVs of the 1980s have given way to more advanced high-capacity "Duplex" trains capable of working into neighboring countries including Germany, Switzerland and Spain.

High speed rail is also a major export success, with TGV technology being sold to Spain, South Korea, Taiwan, Morocco, Italy and the United States over the last 30 years.

Japan introduced the world to the concept of new high-speed railways in 1964 and continues to be a global leader, pushing the boundaries of speed, capacity and safety on its Shinkansen lines.

While most Shinkansen currently operate at a maximum of 300 kph (186 mph), the E5 "Bullet Trains" of Japan Railways East (JR East) run at up to 320 kph (200 mph) on the Tohoku Shinkansen, which runs north from Tokyo to Shin-Aomori.

Each train has 731 seats and 32 electric induction motors delivering an impressive 12,900 horsepower. Constructed of lightweight aluminum alloy, the E5s have "active suspension," allowing them to negotiate curves at higher speeds.

The extraordinarily long nose of the driving cars was designed to reduce sonic booms created when the trains enter tunnels at high speed.

Introduced in 2011, 59 trains were built and since 2016 they have also been used north of Aomori on the Hokkaido Shinkansen, which is connected to Japan's main island of Honshu by the 54-kilometer (33.5-mile) undersea Seikan Tunnel below the Tsugaru Strait.

Africa's first, and so far only, dedicated high speed railway opened in November 2018, linking the port city of Tangier with Casablanca in Morocco.

Named 'Al-Boraq' after a mythical creature that carried the Islamic prophets, the service is the first phase of the country's planned 1,500 kilometer (930-mile) high-speed network.

French-built derivatives of TGV Euroduplex double-deck electric trains operate at up to 320 kph (200 mph) on a dedicated 186-kilometer (116-mile) new line between Tangier and Kenitra.

The $2 billion project also included an upgrade of the existing 137 kilometer (85-mile) section between Rabat and Casablanca for higher speeds, reducing the end-to-end journey time from 4 hours 45 minutes to just 2 hours 10 minutes.

Once the proposed new line to Casablanca is built, travel time will be cut to just 90 minutes.

Al-Boraq holds the African rail speed record too -- during pre-service tests in 2017 one of the 12 Alstom-built trains touched 357 kph (222 mph) on the new line -- more than twice the speed of any next fastest trains currently running on the African continent.

Spain joined the high-speed club in 1992 using TGV technology imported from France. Since then it has developed its own superfast trains and built Europe's longest network of dedicated long-distance lines, radiating out from Madrid to Seville, Malaga, Valencia, Galicia and Barcelona.

AVE, short for Alta Velocidad Espana (Spanish High Speed) but also the Spanish word for bird, usually operates at a commercial maximum of 310 kph (193 mph). Pride of the fleet are the S-102 Talgo and S-103 "Velaro" trains, the latter a more powerful relative of Germany's ICE3.

Certified for a maximum speed of 350 kph (217 mph) and with a seating capacity of 404, the S-103s share services between Spain's two biggest cities with the homegrown Talgo S-102 high-speed trains.

For many decades, Spanish railways were renowned for their low speeds and long delays, but over the last 30 years AVE has transformed long-distance travel across the country and with the network once again expanding to reach all corners of the country, the revolution looks set to continue.

Since 2004, South Korea has quickly expanded its network of high-speed railways, bypassing classic lines where difficult terrain made journey times slow and uncompetitive.

Starting with the Seoul-Busan route in 2004, KTX trains can operate at up to 330 kph (205mph), although the usual limit is 305 kph (190 mph). First generation KTX-I trains, based on French TGV technology, have halved Seoul-Busan journey times from over four hours to just two hours and 15 minutes.

South Korea is one of only four countries in the world to develop a train capable of running at over 420 kph (260.4 mph), along with France, Japan and China. A new generation HEMU-430X prototype reached 421.4 kph in 2013, beating the previous Korean rail speed record of 352.4 kph set by a second generation KTX HSR-350x train.

The latest trains use homegrown technology and feature pressure-sealed cabins and triple glazing to reduce noise and eliminate discomfort in the many tunnels.

With up to two departures each hour on main routes and trains of up to 20 cars, KTX is a high-speed mass transit system carrying hundreds of millions of passengers a year. KTX trains also link Seoul with Gwangju, Mokpo and Yeosu in the south of the country and Gangneung in the northeast -- the latter built to serve the Olympic Winter Games host city of Pyeongchang in 2018.

Italian State Railways' stunning Frecciarossa (Red Arrow) high-speed trains were introduced in 2017 as a response to a new privately-owned rival.

Designed for a maximum speed of 400 kph (250 mph), they live up to their name with an arrow-like streamlined design, 10,000 horsepower output and electrifying performance.

The 200-meter long trains have 457 seats in four classes ranging from comfortable standard to business, premium and executive, the latter with just 10 reclining armchairs and at-seat service.

Normal commercial schedules only call for a maximum of 300 kph (186 mph) but even this has revolutionized inter-city travel in Italy, greatly increasing rail's market share of key routes such as Milan-Rome and contributing to the recent demise of national flag carrier Alitalia.

After extensive testing over the last two years, Italian State Railways will go head-to-head with French TGVs on the Milan-Paris route in 2022, with Red Arrow trains providing a compelling alternative to the aging TGVs.

A further batch of Red Arrows is being delivered to Spain where they will compete with homegrown AVE and Ouigo Espana services on high-speed routes radiating from Madrid.

Stifling heat and sandstorms don't immediately strike you as the ideal environment for sophisticated high-speed electric trains, but Saudi Arabia's Haramain High-Speed Railway (HHR) links the holy cities of Mecca and Medina at speeds of up to 300 kph (186 mph).

Each train has 13 cars seating 417 passengers in economy or business class and HHR has a capacity of 60 million passengers a year. This crowd-busting capability is put to the test during Hajj, the annual pilgrimage to Mecca during which more than two million Muslims visit the city's holy sites. Since HHR opened in 2018 it has become a popular way to travel between Medina and Mecca, no surprise when the equivalent road trip can take up to 10 hours.