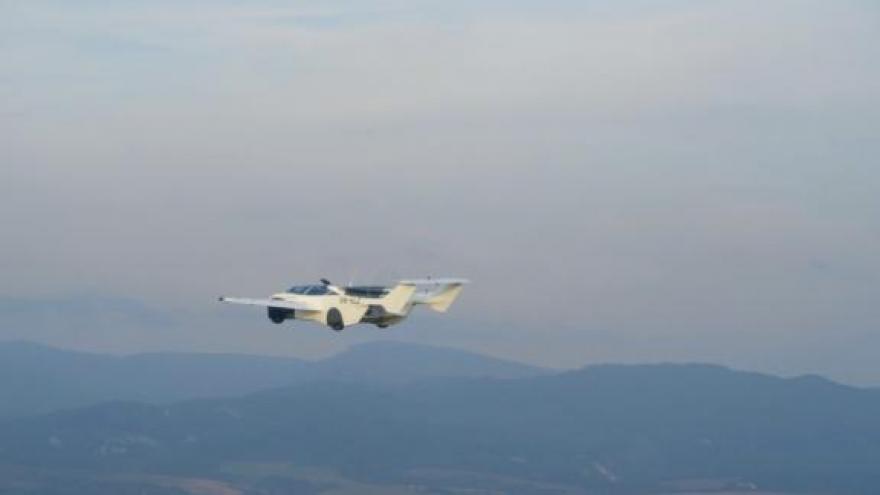 Klein Vision's AirCar flew between Nitra and the capital Bratislava on Monday, according to a press release published Wednesday.

The AirCar Prototype 1 is powered by a 160 horsepower BMW engine, and comes equipped with a fixed propeller. It transforms from aircraft to road vehicle in less than three minutes.

It has now completed more than 40 hours of test flights, according to Klein Vision, including flying at 8,200 feet and reaching a maximum cruising speed of 190 kilometers per hour (118 miles per hour).

After landing in Bratislava on Monday, the aircraft transformed into a car, and was driven into the city center by Klein Vision CEO Stefan Klein and company co-founder Anton Zajac.

"AirCar is no longer just a proof of concept," Zajac said in the press release. "It has turned science fiction into a reality."

The company is working on a model called AirCar Prototype 2, which will boast a 300 horsepower engine.

Klein Vision plans to develop three- and four-seater models of the AirCar, as well as twin-engine and amphibious versions, according to its website.

A growing number of companies are exploring the potential of flying vehicles despite hurdles including safety and reliability. Flying vehicles would need to operate in crowded airspace, near small drones and traditional airplanes, and also need a regulatory framework, which could take years.

Uber and Hyundai unveiled plans for an electric flying taxi at last year's Consumer Electronics Show in Las Vegas. Michael Cole, the CEO of Hyundai's European unit, said on Tuesday that the South Korean automaker is working "very actively" on the program.

Volkswagen said in February that it is looking into flying vehicles in China. Meanwhile, Porsche, Daimler and Toyota have all backed startups in what is known as the electric vertical takeoff and landing (eVTOL) industry.

In August 2020, Japanese company Sky Drive Inc. conducted Japan's first public demonstration of a flying vehicle. The car took off from Toyota Test Field and circled for around four minutes.