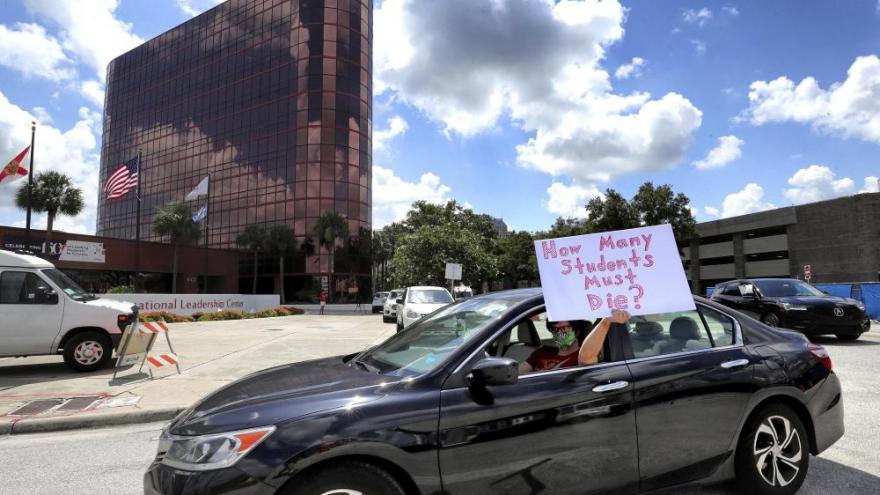 A teacher holds up a sign while driving by the Orange County Public Schools headquarters as educators protest in a car parade around the administration center in downtown Orlando, Fla., Tuesday, July 7, 2020. OCPS teachers are protesting the decision by Gov. Ron DeSantis and the state education commissioner mandating that all public schools open in August despite the spike in coronavirus cases in Florida.

(CNN) -- Florida has announced that it will require schools to reopen for in-person classes next month. The order came down as the state smashes daily records for new coronavirus cases and some hospitals report maxing out capacity.

"We've been given no guidance. We've been given no regulations that make sense to reopen our schools, and in the middle of a pandemic, we're being told we have to reopen schools come hell or high water," Fedrick Ingram, president of the Florida Education Association told CNN Tuesday night.

Florida has become a new hot spot for the virus, with more than 200,000 cases -- the fourth highest in the nation. Yet, the state's Department of Education said Monday that all "brick and mortar schools" will be required to open "at least five days per week for all students" in August.

At least one superintendent has said he will let "local conditions at the time" dictate whether schools open.

"I will not reopen our school system August 24 if the conditions are what they are today," Alberto Carvalho, the superintendent of Miami-Dade County Public Schools said Tuesday. "Our reopening plan contemplates a phase two reality. We are still in phase one, a phase one that has degraded over the past few weeks."

The state's decision fits with President Donald Trump's wish to reopen schools come fall. On Tuesday, Trump said he was pressuring governors to reopen schools in a push to get the country to reopen as well. At least 35 states are currently reporting an upward trend of new cases, according to Johns Hopkins University data.

"It's really ludicrous" for the White House and Florida Gov. Ron DeSantis to say that "all schools must reopen when Miami is the epicenter of Florida" for the virus, Karla Hernandez-Mats, president of the United Teachers of Dade, told CNN's Brianna Keilar.

"This is about science, not science fiction. And what we see here is that we have leaders that are only basing their reality on something that apparently is science fiction," the union leader said.

At least six associations representing teachers and parents -- including the National Parent Teacher Association and the American Federation of Teachers -- have criticized the President's push to reopen schools. They say guidance on how to do so from the US Centers for Disease Control and Prevention and the government conflicts.

"Public school educators, students and parents must have a voice in critical conversations and decisions on reopening schools," the statement reads. "The president should not be brazenly making these decisions."

Teachers are asking where to find living wills

"This is about life and death," Ingram said. He said while many teachers are in their 30s and 40s, that doesn't mean they wouldn't be taking a risk by stepping into a classroom.

"We're not answering those questions."

One of the teachers that will soon have to go back is Tracy Merlin, who teaches elementary school students and says it's nearly impossible for instructors to guarantee their students' safety under the current circumstances.

But it's also impossible to guarantee teachers will be safe.

"This morning, when I was l looking on social media, teachers were posting, 'Where can I get a living will?' Not what are we going to do for science this year or social studies. 'Who is a person that I can reach out to for living will?'" Merlin said. "That is completely unacceptable."

'My classroom was a germ factory'

The debate around reopening schools has quickly reemerged as states that reopened weeks ago began seeing a new surge of cases after what some saw as hopeful dips. With the virus now out of control and spreading, educators across the US are protesting decisions to return to business as usual.

But other groups have offered forceful arguments in favor of returning children to their school desks.

"The importance of in-person learning is well-documented, and there is already evidence of the negative impacts on children because of school closures in the spring of 2020," the American Academy of Pediatrics, representing pediatricians nationwide, wrote recently.

"Lengthy time away from school and associated interruption of supportive services often results in social isolation, making it difficult for schools to identify and address important learning deficits as well as child and adolescent physical or sexual abuse, substance use, depression, and suicidal ideation," the group said.

Lily Eskelsen Garcia, the president of the National Education Association, knows all too well what the negative impacts of returning to the classroom could be.

"Those pediatricians that said we have to consider the mental health of the children, of course we do. But they didn't say at the expense of their physical health," she told CNN.

Garcia said she previously taught nearly 40 middle schoolers in a "tiny little classroom with one window."

"That was not healthy before the pandemic," she said. "My classroom was a germ factory. I knew that I was going to catch someone's cold every year. This is different. This is a virus that kills people."