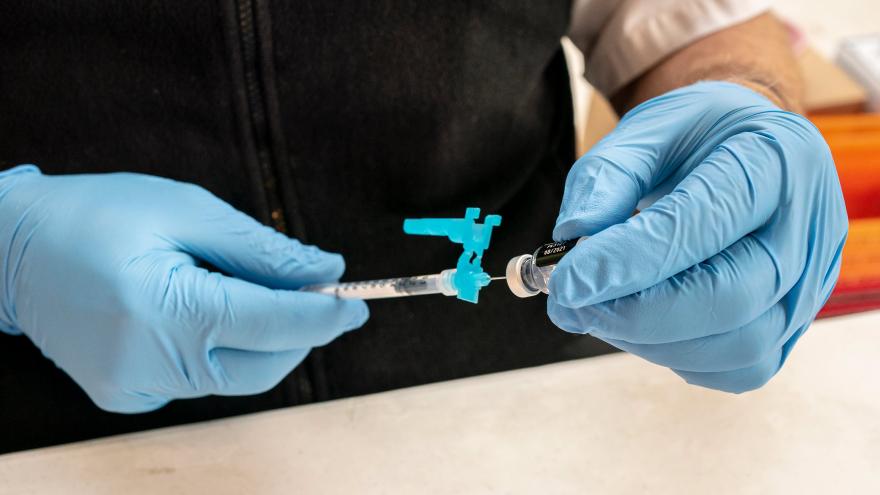 Turning that into law is now in the hands of Florida lawmakers, who return to the state capitol Monday for a special legislative session specifically targeted at the issue.

If successful, Florida would become the first state to pass a law fining businesses and hospitals that comply with President Joe Biden's push to get the country's workforce inoculated. Florida is already one of 26 states taking the Biden administration to court over its private employer vaccine mandate.

DeSantis has become one of the leading Republican voices against Covid-related mandates. The first-term governor and prospective 2024 presidential hopeful has consistently sparred with Biden over vaccines, masks in schools and other pandemic policies, even as deaths and hospitalizations surged in his state during the summer. And he has vowed to punish businesses that side with the Biden administration in this fight.

Asked about DeSantis' comments, White House deputy press secretary Karine Jean-Pierre said the President was focused on getting the country out of a pandemic.

How far lawmakers are willing to follow DeSantis in this battle remains to be seen. The proposals up for debate during the one-week special legislative session already represent a significant watering down of the hardline approach DeSantis had sought when he first promised to take on Biden's new mandate.

After emerging as the epicenter of the Sun Belt's summer coronavirus surge, Florida has seen a sharp decline in cases and hospitalization and now has one of the lowest infection rates in the country. Still, about 100 people are dying each day in Florida from the virus, representing about 10 percent of the daily death toll nationwide. The state recently surpassed 60,000 coronavirus deaths.

When the vaccine arrived, DeSantis was content to let businesses decide for themselves whether to mandate vaccines for their workers. But pressure on him to act grew after Texas Republican Gov. Greg Abbott, a fellow 2024 contender, issued an executive order that prohibited any entity from requiring a Covid-19 vaccine up and instituted a fine of up to $1,000.

DeSantis' shift on vaccination mandates has led Democrats to accuse DeSantis of posturing for his future political ambitions.

"A lot of this is being distorted for a political agenda," said Democratic state Rep. Ben Diamond. "He's preparing to run for president, obviously, and he has to appeal to a far right extreme."

Following Abbott's lead, DeSantis called for a ban on vaccine mandates in October and he threatened to pull state protections against coronavirus-related lawsuits from companies that adhered to Biden's mandate. Such a bill could have put several of Florida's largest and most powerful employers in the crosshairs, including Disney, which has already reached an agreement with its unionized workers to get the shot.

But Republican lawmakers who control the state House and Senate and rely on Florida industries to fund their campaigns have so far balked at the idea. Far from a mandate, the bills under consideration would instead allow businesses to require vaccination as a condition of employment as long as workers are allowed to opt-out through a medical or religious exemption or by submitting to regular testing for Covid-19.

The Biden administration's new rules for vaccinations also allow workplaces to offer testing as an alternative to the shot, giving Florida businesses some space to follow the federal vaccine requirements and still avoid state penalties. Florida, though, would also provide an exemption to people who can demonstrate "natural immunity," though how that will be monitored remains to be seen.

DeSantis spokeswoman Christina Pushaw said the governor provided input on the legislation and is "satisfied" with the final outcome.

"From the day he called the special session weeks ago, Governor DeSantis has been very clear about what he wants: No Floridian should lose his or her job for declining the COVID shot," Puhsaw said.

The measures will force many business leaders to choose between thousands of dollars in potential state fines and their personal beliefs on how to best protect their employees and customers during a deadly. The Republican-aligned Florida Chamber of Commerce, which has criticized the Biden administration's handling of vaccines, said it opposes "one size fits all governmental mandates" and said, "Consumers, employees, and employers are in the best position to make these choices for themselves without any government intervention."

The proposed legislation also puts health care providers in a difficult position. A separate vaccine mandate administered by the Centers for Medicare & Medicaid Services requires medical facilities to mandate vaccination for employees without a testing alternative, or risk losing their federal funding.

If hospitals, nursing homes and other providers follow the CMS rules, they could face hefty fines from Florida. Some have already decided that ignoring the federal mandate isn't an option.

"Unless instructed otherwise by the courts, most hospitals will have little choice but to follow the federal mandates to ensure that millions of Florida seniors and the vulnerable who rely on Medicare and Medicaid maintain access to high quality care at our facilities," said Mary Mayhew, president and CEO of the Florida Hospital Association, which represents 200 hospitals in Florida.

Vaccination hesitancy among Florida's health care workers remains a major concern to public health officials. In a recent analysis, AARP found the vaccination rates among nursing home workers in Florida was the fifth lowest in the country. More seniors live in Florida than any state other than California.

Jeff Johnson, the director for AARP in Florida, said he worried the proposed legislation in Florida will slow down efforts to get these workers vaccinated before the state faces another wave of cases or a future variant.

"That's a concern and it puts residents at risk," Johnson said. "We're still fighting the last war about vaccinations at a time when we really should be talking about how do we make sure we have boosters for the people who were vaccinated at the beginning of the year."

DeSantis has warned that nurses and other health care professionals will quit if they're forced to get the shot at a time when the state is already facing a shortage of frontline health care workers.

"If even a fraction of them decide that this is not something they want to do and leave, this will cause a lot of these health systems to hemorrhage," DeSantis said.

Florida's new vaccine legislation, should it pass, will likely face legal challenges as well. In addition to fining businesses, Florida lawmakers are considering pulling out of the Occupational Safety and Health Administration, the federal agency tasked with enforcing Biden's mandate on businesses.

"Ultimately, the courts are going to have to figure it out," said state Sen. Jeff Brandes, one of the few independent Republican voices in the legislature.