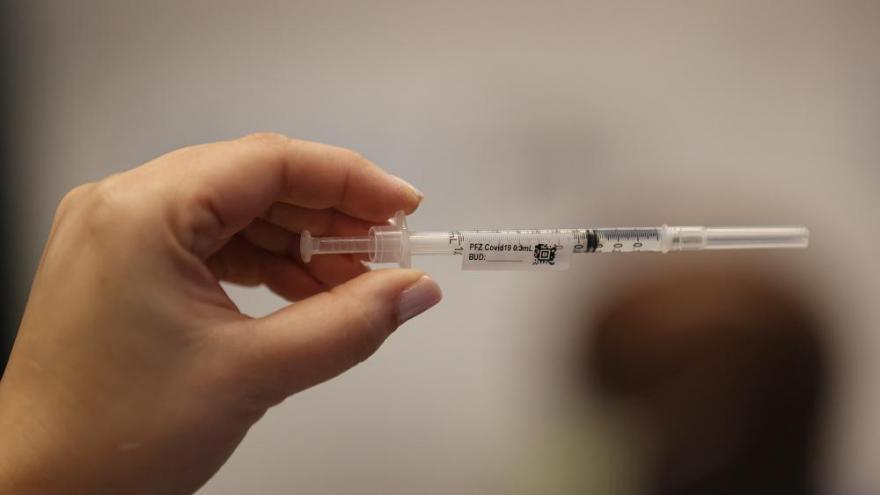 A nurse holds up a syringe with the Pfizer-BioNtech COVID-19 vaccine in it at the Jackson Memorial Hospital on December 30, 2020 in Miami, Florida. Jackson Health System began Pfizer COVID-19 vaccinations for people 65 and older in Miami-Dade County.

(CNN) -- Florida has put state health centers in charge of rolling out Covid-19 vaccines, and with some opting for less organized plans, it's left seniors to deal with crashing websites, jammed phone lines and nights spent waiting in line.

"The state is not dictating to hospitals," Florida Gov. Ron DeSantis told CNN's Rosa Flores on Monday. "These guys are much more competent to deliver health care services then a state government could ever be."

While Florida does have a structure in place for deciding the priority groups to be vaccinated, it is up to the healthcare facilities to organize getting vaccines to patients. Some hospitals have forgone a registration system and instead have a first-come, first-served strategy to administer vaccines distributed by the state, DeSantis said. Demand has been high among seniors, who are among those most at risk for severe illness from Covid-19.

And seniors make up a significant proportion of the state's population: More than 3.2 million of the 18.8 million Floridians are over 65, according to the 2010 US Census.

Director of Florida's Division of Emergency Management, Jared Moskowitz said in a question-and-answer session Wednesday that the state is working to deal with the varying appointment system across counties, especially in planning to serve seniors who cannot wait in long lines, according to CNN affiliate WFTV.

As of Tuesday, about 19 million doses had been distributed nationally and 4.8 million administered, according to the latest data from the Centers for Disease Control and Prevention. Florida is among 12 states that have administered fewer than a quarter of their vaccines. More than 329,000 people had been vaccinated in the state as of Tuesday, the state said.

The haphazard rollout has led to dramatic scenes in the state. On Monday night, Daytona Beach officials announced that the first 1,000 people lining up for Tuesday vaccinations would be allowed to park and wait overnight in Daytona Stadium to alleviate traffic and road blocking.

The announcement came after the line started to form 12 hours before the first shot on Tuesday was scheduled to be given, according to WFTV. On Monday morning, all 1,000 people allocated to receive the vaccine for the day were at the location by 6:30 a.m., a half an hour before the site was schedule to open, the outlet reported.

"Oh, I want that vaccine more than anything," said Daytona Beach Shores resident Deborah Boyd told WFTV. "Honestly, I would have helicoptered in, parachuted to get this vaccine and I'm willing to wait as long as it takes. I can't live like this anymore."

The facility reached capacity more than two hours before it opened for vaccinations, the city announced on Facebook.

In South Florida, Broward Health said last week all of its appointments are booked until February.

While recognizing the rollout of vaccines has not been perfect, DeSantis said Florida's is the "better approach."

Most states are first vaccinating just health care workers and long-term care patients, but Florida has expanded the reach of its doses.

"If you have a 73-year-old parent, 73-year-old grandparent, in the vast majority of states in this country, they are not eligible to be vaccinated. We don't believe that's right. We believe seniors have to be put first," he said.

DeSantis did warn hospitals to increase their rate of administration, adding that some facilities are doing better than others.

"We want you to use the vaccine. If you're not using it then we are going to make sure that additional allotments are going to be reduced and then expanded in places where they are making good use of it," DeSantis said.

To help meet the demand for seniors to be vaccinated, Florida announced the opening of new Covid-19 vaccination sites. The Hardrock Stadium in Miami Gardens will serve 1,000 people a day, and Publix Supermarkets will use 15,000 doses of the Moderna vaccine to launch a pilot vaccine site program at 22 stores starting Friday, DeSantis announced.