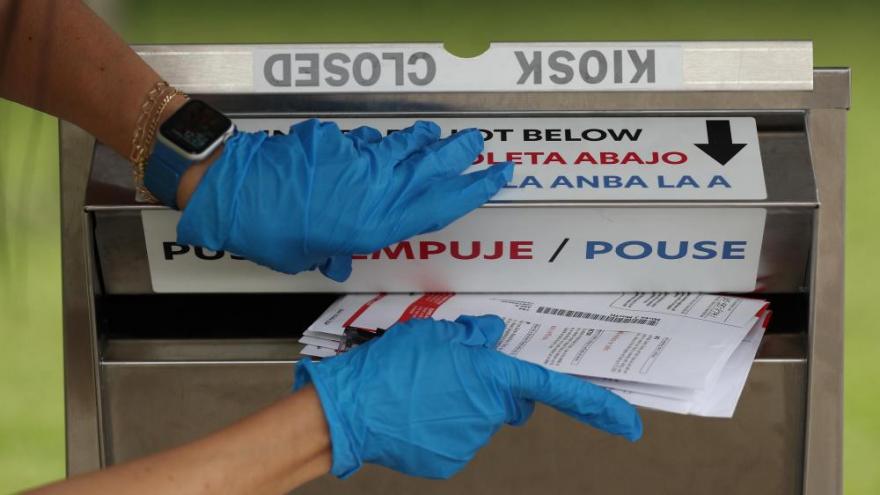 A Florida Senate panel votes to advance a revamped election bill that would ban drop boxes used for mail-in ballots, pictured here on October 2020 in Florida, despite bipartisan opposition from local election supervisors.

(CNN) -- A Florida Senate panel on Wednesday voted to advance a revamped election bill that would ban drop boxes used for mail-in ballots, among other changes, despite bipartisan opposition from local election supervisors.

Committee Substitute Senate Bill 90, approved 4-2 along party lines, would also prohibit anyone other than an immediate family member from picking up a voter's ballot and would require vote-by-mail ballots to be requested each election cycle, rather than every two cycles. It increases the identification requirements to request a ballot by mail over the phone and prevents elections supervisors from sending ballots to voters without a request.

The decision also comes as state lawmakers across the country, including in Georgia, are pushing legislation to change election procedures and limit voter access in the aftermath of the 2020 election. Florida Republican Gov. Ron DeSantis last month announced voting proposals he wanted lawmakers to pass during the legislative session, including restricting access to ballot drop boxes and restricting mail-in ballots.

During the a Government Accountability and Oversight committee hearing, several county elections officials challenged the logic and necessity for changes, especially the drop box elimination.

Lake County Elections Supervisor Alan Hays, a former Republican lawmaker, called the proposed elimination of drop boxes "a travesty." It was also noted that 1.5 million Florida voters used drop boxes in the last election. Leon County Elections Supervisor, Mark Earley, warned that the bill "appears to be setting us up for another 2012, when we had long lines, chaos and confusion."

Both Republicans and Democrats repeatedly praised Florida's safe and secure 2020 election during the hearing. Republican State Senator Dean Baxley, the bill's sponsor, agreed with those sentiments -- however, he used hypotheticals to argue drop boxes could be security risks and that his bill would provide a safer chain of custody for ballots, more "guard rails on the highway to make sure no one runs off."

A League of Women Voters of Florida representative noted, "taking away safe & secure drop boxes makes no sense unless you're looking for ways to suppress the vote."

The bill will next go before the Senate Rules Committee.