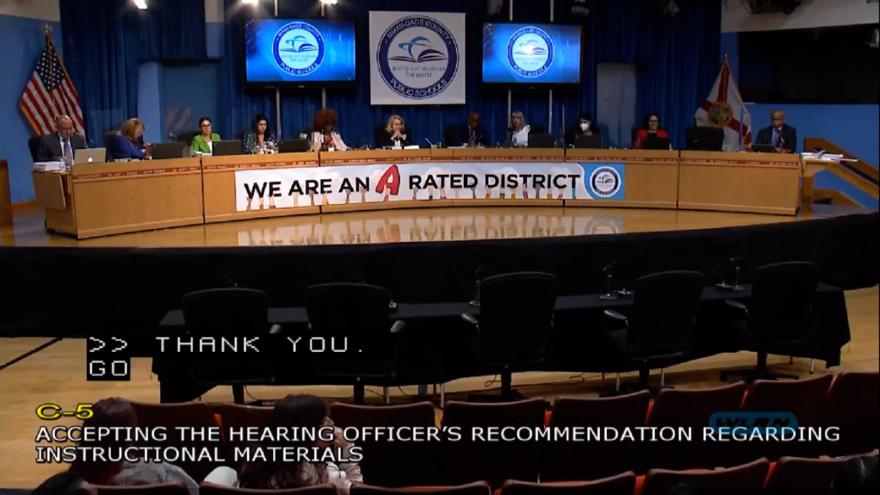 (CNN) -- The board of Florida's largest school district has rejected new sexual education textbooks that it approved three months ago.

The 5-4 vote by the Miami-Dade County School Board on Wednesday leaves students without a sex ed curriculum.

The decision comes four months after the state passed a law banning certain instruction about sexual orientation and gender identity in the classroom that critics call the "Don't Say Gay" law.

The textbooks cover pregnancy prevention, understanding sexuality and sexually transmitted infections, drugs and alcohol, and relationships, according to descriptions in the book.

In April, the board approved middle school and high school versions of the Comprehensive Health Skills textbook. The decision was met with petitions from opponents, prompting a hearing in June to assess the petitions.

District Superintendent José Dotres appointed a hearing officer who recommended the board deny the petitions and adopt the textbooks.

But this week the board rejected them.

The controversy lands when conservatives around the country are pushing bills that would further marginalize members of the LGBTQ community.

Florida Gov. Ron DeSantis, a staunch conservative with a history of supporting anti-LGBTQ causes, in March signed the "Parental Rights in Education" bill.

The law states that "classroom instruction by school personnel or third parties on sexual orientation or gender identity may not occur in kindergarten through grade 3 or in a manner that is not age-appropriate or developmentally appropriate for students in accordance with state standards."

Gina Vinueza, a mental health professional and mother of two in the county, spoke in favor the textbooks at Wednesday's hearing.

"If the board does not approve the textbooks, they will be taking away the rights of everyone to public education that is based on facts and science," she said.

Maxx Fenning, a co-founder and president of Prism LGBT, a nonprofit that works to expand access to sexual health education and resources, said that parents who not want their child to participate in the sex ed curriculum have the right to request an exemption but "trust that they will get this information elsewhere regardless."

Alejandro Serrano, director of the Miami-Dade chapter of County Citizens Defending Freedom, spoke against the adoption of the textbooks, saying "much of the content is not age appropriate, usurps parental rights and is scientifically inaccurate and not factual." Serrano also said the material may violate the state's new parental rights law.

Steve Gallon III, vice chair and member of the District 1 School Board in Miami-Dade, took notes as the people voiced their opinions at Wednesday's meeting. He said 38 of 42 speakers recommended the adoption of the textbooks.

"You do the math... That's 90% of the speakers that spoke recommended that the board adopts the hearing officer's recommendation of the instructional materials," Gallon said.

"We all are committed to defending children," Gallon added. "But we cannot defend some and deny others. The defense of some represents the denial of others."

Miami-Dade County Public Schools is the fourth-largest district in the country, with 334,000 students.