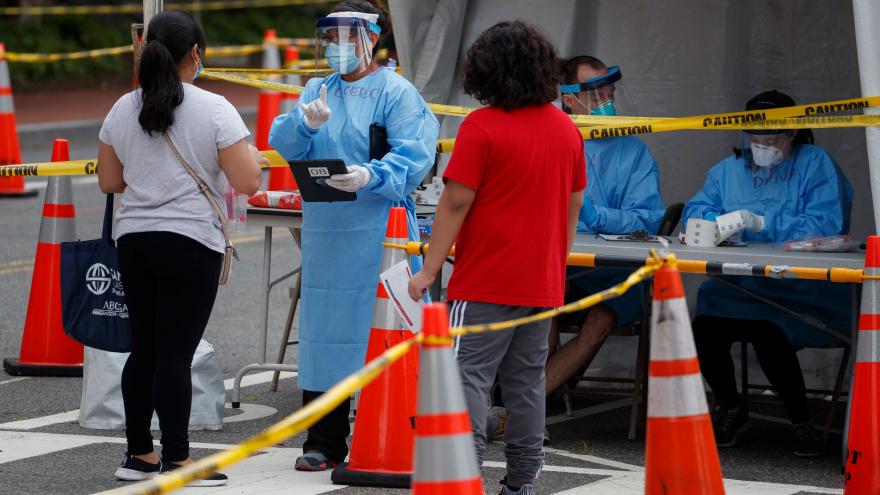 That broke the previous record set just Thursday, when 3,207 reports were added, according to the state Health Department.

The Sunshine State has "all the markings of the next large epicenter of coronavirus transmission," and risks being the "worst it has ever been," according to projections from a model by scientists at Children's Hospital of Philadelphia and the University of Pennsylvania.

In Florida and in other states, the pressure is on for local leaders to respond to regional Covid-19 spikes and records, and some are turning to mask mandates.

Eight states are seeing their highest seven-day averages of new coronavirus cases per day since the crisis began, according to a CNN analysis of data from Johns Hopkins University. This data includes new cases reported by Johns Hopkins through Thursday, June 18.

"I'm hoping my colleagues will agree with some of us who've made that ask," she said.

McKinlay said the public's resistance to wearing masks when outside their homes may come down to virus fatigue. "Florida opened up very quickly," she told CNN. "People thought that that was a return to normal."

In Florida, 'it's about hospital capacity'

During a news conference Friday, Florida Gov. Ron DeSantis said the median age range for coronavirus cases in past few weeks is 37.

"I mean, I do think that a lot of this is voluntary compliance," he said. "I mean, you're just not going to be able to police every single group of people, every single time. And so I think as you get into this month after month, I think people do get a little tired, particularly in some of the age groups that may not be as at risk."

The median age should continue to plunge, the governor added. Most of the younger cases are asymptomatic.

The governor said he will leave mask ordinances up to local governments.

A spokeswoman for DeSantis said in a tweet on Friday, "It isn't about the rising numbers, it's about hospital capacity and Florida is ready to handle."

An infectious disease expert with Florida International University warned against minimizing the risk.

"If you minimize the risk of a dangerous pathogen and put more lives at risk to prop up business, what you get is at best a temporary gain, which will boomerang and produce a far worse outcome for both health and wealth," said Dr. Aileen M. Marty, director of the Health Travel Medicine Program and Vaccine Clinic.

A statewide mandate for masks in California

Similar measures are being considered in North Carolina and Arizona, where Scottsdale Mayor Jim Lane is developing an ordinance with a legal team.

People in Phoenix will be required to wear a face mask whenever they are within 6 feet of another person who is not a member of their family or household, Mayor Kate Gallego tweeted.

New cases and hospitalizations are climbing in Arizona, according to Johns Hopkins. More than 3,000 doctors and nurses sent a letter to Arizona Gov. Doug Ducey, asking him to mandate the use of face coverings.

In Oklahoma, where cases are up 110% from last week, is preparing to welcome large crowds in Tulsa on Saturday for a rally for President Donald Trump.

Dr. Jonathan Reiner, a cardiologist and professor of medicine at George Washington University, told CNN's Erin Burnett that social distancing will be near impossible there and county health officials should shut it down.

All told, 23 states have seen spikes in cases compared to last week. Part of the reason could be that the nation was too early to relax stay-at-home restrictions meant to curb the virus' spread.

"Things opened up prematurely," Dr. Peter Hotez of the Baylor College of Medicine told CNN. "We didn't complete that social distancing period that we needed to do, and now we're seeing this very sharp acceleration."

Leaders hoping to slow the acceleration of the outbreak will have to consider how to implement measures that will both protect health and economy in the long term, Dr. Colleen Kraft, associate chief medical officer at Emory University Hospital, said Thursday on CNN Newsroom.

"Now we've got to figure out how can we protect people at the same time they're going about their daily lives," Kraft said. "We have to focus on living with Covid. There's not going to be a post-Covid world for a long time."

According to data from Johns Hopkins University:

Nationwide, more than 2.2 million people have been infected and at least 118,894 people have died of the virus, according to John Hopkins.

As Americans continue to re-enter public life this summer, the US Centers for Disease Control laid out recommendations for safety at the beach on Thursday.

Many of the recommendations include precautions health experts have been preaching all along.

Face masks, for instance, should be worn even at the beach (expect when in the water to keep airways clear), beach blankets should be set up 6 feet apart and food, supplies and toys should not be shared, according to the CDC guidelines.

The same guidance about keeping a safe distance from others and wearing a face covering apply to other situations as well, health experts have said.